…an inside joke it u’ve seen the movie, “Songs from the second floor”.

Interesting abstract, exploring cinematic poetry and the art of surrealism:

The official FCC deadline for net neutrality comments closed last night at midnight, but there’s still time to make our voices heard. We’ve parked a truck with a giant video billboard directly across the street from the FCC, facing the main entrance to the agency’s headquarters. And we’re playin g a steady stream of net neutrality videos sent in by Internet users all over the world!

This thing is huge — and it’s in an amazing location. FCC employees have been gawking from the windows and stopping by to take flyers and snap photos. We’ll be here all day raising awareness about the importance of the free and open Internet, amplifying the voices of people explaining why net neutrality matters so much to them.

Do you have something to say to the FCC? Make a quick 1 – 2 minute video with your cell phone or web cam of you explaining why you care about the free and open Internet. Send it to us and we’ll play it on the billboard, larger-than-life, for everyone at the FCC to see and hear.

Click here to submit your video to play on the billboard outside the FCC.

Need some inspiration? The good folks at Namecheap who made this billboard action possible made their own video to help educate the Internet public about the importance of net neutrality. Once you get to the part where people are riding on toilets chasing Wall Street Bankers up a bike ramp, you’ll understand why its already been viewed nearly half a million times.

Head to NetNeutrality.com to check out the video and share it now!

The Internet freedom movement is unstoppable right now. The Internet Slowdown was massive, but it was just the beginning. Earlier today our billboard at the FCC was playing livestreams of rallies in NYC and Philadelphia where hundreds gathered to protest Comcast and Verizon’s attempts to sell off the Internet, and call for Title II reclassification: the only path toward real and lasting net neutrality.

Last chance! Submit your video here to play on the big #FCCbillboard, or if you prefer you can send it directly to ted@namecheap.com with the subject line “Billboard submission.”
Also as a last quick reminder, if you ever don’t want to get emails from us it’s super easy to unsubscribe. Just use the link at the bottom of our emails. You’re getting this message because you took acton during the Internet Slowdown for net neutrality, and indicated you wanted to receive updates about the campaign.

Thanks for making history with us!

Fight for the Future

P.S. In case you missed it, check out this inspiring infographic about how incredible the Internet Slowdown was. Unless you’re a Comcast lobbyist, this will make your day.

* Keep us fighting, chip in what you can. 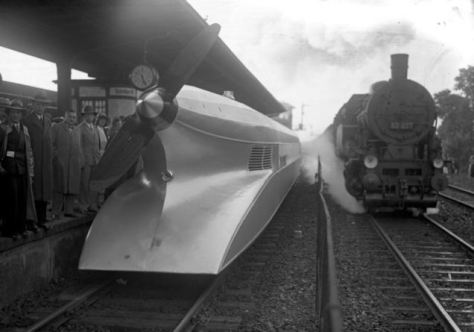 I had no idea what a box of worms I was opening when I started this post. It was going to be a simple post about how the Russians and Americans came up with this harebrained idea of sticking jet engines on a train. I wasn’t prepared to find out that Europe had also found it’s way into this mixed bag of locomotive or should I say totally “loco” means of transportation. Who would have know that the Germans would come up with a Zeppelin train and to boot they did this in 1929? Appropriately they named it the Schienenzeppelin, Scotty beam me up?

Then as I dig a little deeper I find the french are in on this too. And like all things french, their versions are  racy and a bit on the sexy side. Without spoiling to many of the details the Aérotrain01 wasbornin…

Lada, it sounds like there’s a lot of misdirection going on, balance of power = neutralizing corruption, and Russia is the great equalizer. The west wants Ukr to be the next Afghanistan, in a state of perpetual war to destabilize and drag Russia into the conflict. The difference now is Russia has time, resources and PUTIN on their side. Washington is running out of time, worse for US, we have a dimwit puppet for prez who doesn’t mind dragging the whole world into oblivion. Nice job educating and saving the world Lada! ♥

The new Western sanctions, including defence and oil sectors, hit Russia despite ceasefire in Ukraine, the exchange of prisoners, the Minsk meeting between Putin and Poroshenko, and Putin’s peace plan for Ukraine that is being implemented, albeit with a limited success. Putin called the new sanctions “odd.” Odd indeed, as EU still insists Russia must change its policies in Ukraine, as if all the above never happened. At this point it is clear that nothing short of Russia becoming a slave to the West, or happily self-destructing to please the maniacal NWO Western “leaders,” will stop the sanctions.

Many are scratching their heads why these non-sensical sanctions are being implemented now. Instead of encouraging the peace process in Ukraine, they are bound to discourage it. It is also being pointed out that the Kiev regime is using the ceasefire in order to regroup, build-up defenses in strategic points, and to bring…

Yes the world has problems, let’s try to respect one another and not add insult to injury. Here’s the story from different perspectives, who’s right, who’s wrong? What do you think?

Danièle Watts, star of Quentin Tarantino’s Django Unchained, wrote on her Facebook page that she was handcuffed and thrown into the back of a police cruiser after failing to provide officers with ID.

The reason for the kidnapping and harassment….the ignorant cops assumed Watts was a prostitute.

According to the post on her facebook page, this detainment was quite horrific. Yet, Watts, in the face of these ignorant cops, managed to flex her rights by refusing to ID, since she had done nothing wrong.

Today I was handcuffed and detained by 2 police officers from the Studio City Police Department after refusing to agree that I had done something wrong by showing affection, fully clothed, in a public place.

When the officer arrived, I was standing on the sidewalk by a tree. I was talking to my father on my cell phone. I knew that I had done nothing wrong, that I wasn’t harming anyone, so I walked away.

A few minutes later, I was still talking to my dad when 2 different police officers accosted me and forced me into handcuffs.

As I was sitting in the back of the police car, I remembered the countless times my father came home frustrated or humiliated by the cops when he had done nothing wrong. I felt his shame, his anger, and my own feelings of frustration for existing in a world where I have allowed myself to believe that “authority figures” could control my BEING… my ability to BE!!!!!!!

I was sitting in that back of this cop car, filled with adrenaline, my wrist bleeding in pain, and it occurred to me, that even there, I STILL HAD POWER OVER MY OWN SPIRIT.

I will continue to look any “authority figure” in the eye without fear. NO POLICE OFFICER OR GOVERNMENT OFFICIAL IS MORE POWERFUL THAN ME. WE ARE EQUALS. I KNOW THAT I WILL ALWAYS BE FREE BECAUSE THAT IS THE NATURE OF MY SPIRIT.

And moreover, I deeply enjoyed connecting with the cops who detained me. I allowed myself to be honest about my anger, frustration, and rage as tears flowed from my eyes. The tears I cry for a country that calls itself “the land of the free and the home of the brave” and yet detains people for claiming that very right.

Today I exist with courage, knowing that I am blessed to have experienced what I did today. All of those feelings, no matter how uncomfortable. These feelings are what builds my internal strength, my ability to grow through WHATEVER may happen to me.

That internal knowing is what guides me in this world. Not the law, not fear, not mistrust of government or cops or anything else.

In this moment there is a still small voice whispering to me. It says: You are love. You are free. You are pure.

Post by Daniele Watts.
Now here are the audio recordings of the incident… you decide:
http://www.tmz.com/2014/09/15/django-actress-daniele-watts-lapd-race-card-fame-audio/

The “Django Unchained” actress who claimed she was harassed and hurt by cops after making out with her boyfriend was actually having sex in her car according to witnesses … then went on a rant with cops accusing them of racism and not knowing who she was … according to police audio obtained by TMZ.

Daniele Watts had just left CBS studios in the San Fernando Valley around 2 PM Thursday. She says she was making out with her BF, but we’ve learned witnesses from the nearby Art Directors Guild office building told cops they were watching her and her BF have full-on sex in the passenger seat WITH THE DOOR OPEN!

The eyewitnesses said the guy was sitting in the seat, she was straddling him and it was for everyone to see. One eyewitness told cops they cleaned themselves up afterward with a tissue.

TMZ obtained police audio of the incident.  Watts instantly plays the race card when Sgt. Jim Parker asked for her ID. She quickly moves from the race card to the fame card — then storms off, refusing to show her ID.

While Watts was gone, Sgt. Parker had a very cordial conversation with her BF Brian.

She was apprehended by another cop a short distance away and brought back — and things got NUCLEAR!

Some of her choice comments:

– “I hope when you’re f***ing your spouses you really feel alive.”

We’re told she plans to file a complaint with the LAPD and has hired a lawyer.