This week Johnny selected “The Drive” as our theme. Summer’s coming up, beach, barbeques, road trippin’ with friends. What drives us to do the things we do anyway? Where’s the real driver behind the wheel of our lives? Who knows, perhaps that’s why we’re here, to find out….

k.d. lang & melissa etheridge You can sleep while i drive

The Passenger – Iggy Pop and The Stooges

♪You’re a ghost on the highway
And I’ll love you forever….♪

Does Chernobyl fire threaten a new nuclear disaster? Who did it? Who will be affected most? What really happened in 1986? New warnings and predictions.

According to the official Kiev, the raging forest fire in the Chernobyl exclusion zone has been localized by Ukrainian firemen. Kiev admits to the fire continuing full force over the area of 70 hectares, with additional areas smoldering. According to various sources, the fire has spread over a large area of woods 20 km from the buried reactor and near the nuclear waste burial sites. The waste from the Chernobyl catastrophe and other Ukrainian nuclear sites has been buried in the area since 1986.

However, there is other nuclear waste in the area as well. In 2014 I wrote about the new contract the Kiev junta signed with EU and US: according to this contract, Ukraine’s Chernobyl now serves as a burial ground for the…

TABU; Towards A Better Understanding

The Mad Hatter: Have I gone mad?
[Alice checks Hatter’s temperature]
Alice : I’m afraid so. You’re entirely bonkers. But I’ll tell you a secret. All the best people are. 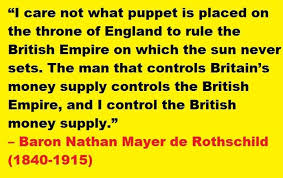 This is meant to be a compilation to deeply understand those that control our money supplies, our governments, the media, and the military forces around the planet that war with all.

There are NO real developed nation governments (Russia, China, U.S., England, Canada, Austrlia,etc) that are representatives of “The People” who live in a Republic or a Democratic Society. None!

It is a very well planned, centuries old, great illusion. And has been for over a century.

Wealth was concentrated by the very few over a century ago. They, the “Family”, then set about installing Central Banks in all countries to control the money supplies of those countries and thus own their governance and people through control of…