“It allows you to covertly collect data from the most common desktop operating systems, such as: Windows, OS X, Linux,” the email claimed. “Furthermore, Remote Control System can monitor all the modern smart phones: Android, iOS, Blackberry, Windows phone. Once a target is infected, you can access all the information, including: Skype calls, Facebook, Twitter, WhatsApp, Line, Viber and many more—device location, files, screenshots, microphone, virtual currencies and much more.”

A brochure for RCS stated: “Take control of your targets and monitor them regardless of encryption and mobility … Remote Control System is invisible to the user, evades anti-virus and firewalls, and doesn’t affect the devices’ performance or battery life.”

Other promotional material emphasised that RCS could remotely activate microphones and cameras and send the data back for analysis, and monitor people logging in to Gmail and Facebook.

News for the Revolution 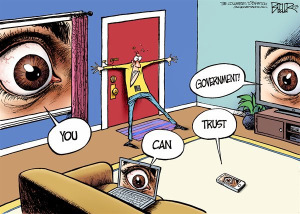 WikiLeaks last week published more than one million emails from the Italian surveillance malware vendor Hacking Team, shedding further light on the extent of the spying being conducted by governments around the world against their populations.

Emails in the searchable database disclose the company’s negotiations with intelligence and police agencies to supply some of the advanced technology used to secretly hack into, take control over and monitor computers and smart phones.

In its emails, Hacking Team boasts that its programs can “attack, infect and monitor target PCs and smart phones, in a stealth way” and “bypass encryption, collect relevant data out of any device, and keep monitoring your targets wherever they are, even outside your monitoring domain.”

At least 46 countries are identified as purchasing, or preparing to purchase, Hacking Team software. The list features Western powers, such as the…

“The Turks have passed by here; all is in ruins and mourning. “

So wrote France’s great writer, Victor Hugo,  of the horrors he had witnessed during the Balkan liberation wars of the 1880’s.  If Hugo were alive today, he might well have used the same haunting lines to describe the smoking wreckage of the Mideast.  Except this time it was the  United States, France and Britain who wrought havoc in the Arab world, assisted by modern Turkey.

The UN’s refugee czar, Antonio Guterres, just asserted that there are now 4,013,000 Syrian refugees outside their homeland, and another 7.6 million as internal refugees from the war raging there since 2011.

That total’s some 11.6 million refugees- a staggering 50% of Syria’s population.  Over a quarter million are refugees in Europe; the rest spread across the Mideast with the…

The Rhapsody on a Theme of Paganini in A minor, opus 43, is a concertante work (20 to 25 minutes in length), written by Sergei Rachmaninoff. It is written for solo piano and symphony orchestra, closely resembling a piano concerto. The work was written at Villa Senar, according to the score, from July 3 to August 18 1934. Rachmaninoff himself, a noted interpreter of his own works, played the solo piano part at the piece’s premiere at the Lyric Opera House in Baltimore, Maryland, on November 7, 1934 with the Philadelphia Orchestra, conducted by Leopold Stokowski. The piece is a set of 24 variations on the twenty-fourth and last of Niccolò Paganini’s Caprices for solo violin, which has inspired works by several composers. The slow eighteenth variation is by far the most well-known, and it is often included on classical music compilations without the rest of the work. It is based on an inversion of the melody of Paganini’s theme. In other words, the A minor Paganini theme is played “upside down” in D flat major. Rachmaninoff himself recognized the appeal of this variation, saying “This one, is for my agent.”

Quoted from Michael Steinberg’s “The Concerto: a listener’s guide”