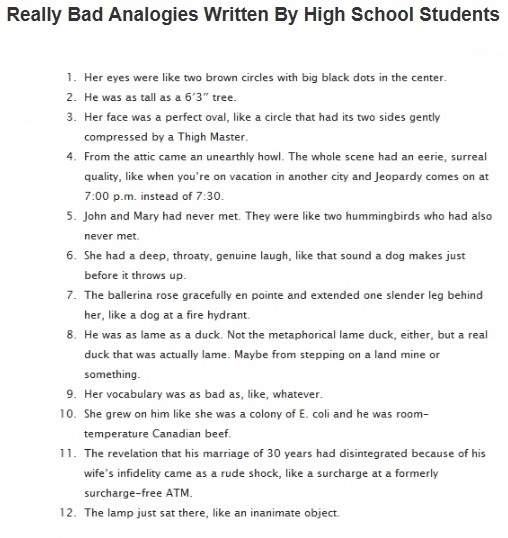 The above seems plausible enough. I was once in high school and undoubtedly penned a number of bad analogies, though I also recall having considerable difficulty differentiating analogies, metaphors and similes from one another.

While most of my analogies were sports-related – “the sound his head made as it bounced off the pavement was a sharp thwack, resembling the tone of a Nolan Ryan fastball being fouled off by Reggie Jackson” – and many were substandard, they probably weren’t as cringe-worthy as the above.

But, of course, the Internet being the Internet, it turns out that the above analogies weren’t written by high school students but by readers of the Washington Post.

In July 1995 the Post ran a contest asking for outrageously bad analogies, according to the blog Socratic Mama. Readers were asked to write the most hideous prose they could imagine. The above is a selection of those submissions.

It wasn’t long before…

2 thoughts on “The analogy was a bad one, not unlike a illogical comparison”