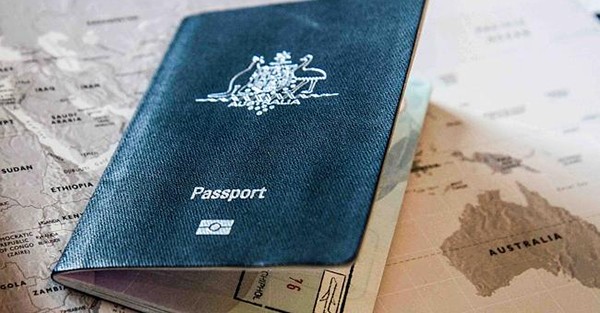 It wasn’t that long ago that you could travel from one corner of the world to another with nothing but your good looks.

There are people still alive today, in fact, who were born into a world where passports were not widely used for international travel.

The passport itself is a relatively recent invention, an unfortunate consequence of World War I. And they didn’t really become ubiquitous until the late 20th century.

Now, in many respects you can’t leave your own country without one, especially if you hail from the Land of the Free.

Americans are so ‘free’, in fact, that they can’t even go to Canada without forking over $165 to the government of the United States just to ‘apply’ for a little booklet that gives you the right to leave the country.

Passports are nothing more than a form of control— a way to obtain oodles of personal information and to restrict one of the most basic freedoms of humanity— the freedom to move.

Edward Snowden has been waylaid in Russia for more than two years because the US government rescinded his passport, effectively terminating his ability to travel anywhere.

I remember being in Africa a couple of years ago watching a herd of elephants in the wild continually cross the border in and out of Zambia and Zimbabwe near Victoria Falls.

While the elephants roam freely, we humans obstruct ourselves with imaginary barriers and demands for a bunch of silly paperwork, passports, and visas. Not exactly the pinnacle of civilization.

So you can imagine how excited I was when I read about Australia’s government announcing a program to eliminate passports. Incredible.

Then I saw the punch line— the idea is to eliminate physical passports. So instead of giving everyone these little colored booklets, they want to move passports ‘into the cloud.’

Hey, it worked for Microsoft.

The ‘cloud’, of course, is the technological Neverland where unicorns play, tech titans rake in record profits, and millions of gigabytes of data are stored.

The cloud is what makes it possible for you to store files on remote servers and access them across multiple devices (phone, tablet, laptop) over the Internet.

You might use Dropbox or iCloud, for example, both of which are popular cloud-based storage platforms. (Though I’d suggest switching to a more secure platform like SpiderOak or Tresorit.)

So now Australia’s government proposes moving citizens’ personal information into the cloud, with a pilot program to test travel between Australia and New Zealand with cloud-based passports.

It remains to be seen how it would even work once you arrive. Do you give a secret handshake? PIN code? Or do you get to bypass the immigration line altogether?

Probably not. Cloud-based passports would likely be loaded with all sorts of biometric data, facial recognition, etc.

And all of this data would be placed online in government databases. I mean, they might as well paint a bulls-eye on the server farm and hang a sign on it that says “Please Hack Me.”

In the black market, that kind of data is worth billions. And governments don’t exactly have a sterling track record of tip-top network security.

The Australian Government’s Cyber Security Centre released a report just a few months ago stating that government networks are attacked every day, and that cyber security incidents are up over 300% from 2011 to 2014.

Over the summer the US government embarrassingly admitted to a data breach that exposed over 20 million Americans, up from an initial estimate of 4 million.

If the thought of submitting to the indignity of biometric data and RFID chips on physical passports weren’t bad enough, the prospect of pushing all of that data online to be ‘safeguarded’ by government bureaucrats is simply agonizing.

Who knows if there’s any nefarious intent behind this. My guess is that a bunch of politicians are desperate to look smart and innovative, so they spout off some poorly thought-out idea that is even more poorly executed.

Governments, on the other hand, get to paper over the consequences of their incompetence by printing money and indebting future generations.

They make egregious mistakes with people’s lives and livelihoods, in this case putting the private (even biometric) information of millions of citizens at risk.

And they’re never held accountable. Ever. Leaving them free to move on to the next bad idea.

Perhaps next time it will be implantable chips.