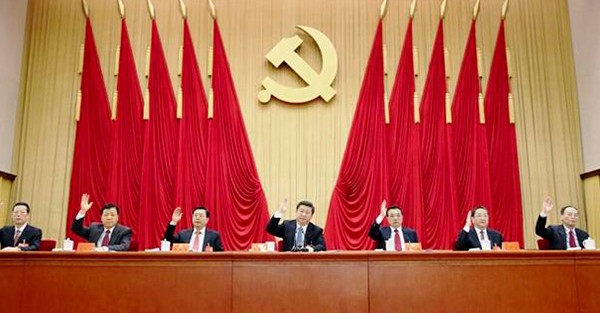 High up Yuntai mountain in China’s Henan province is a glass bridge that lets tourists walk out across the sky and look down at the lush valley floor over 3,000 feet below.

Glass walkways like this are quite popular across China, stunning visitors with both beauty and the thrill of danger.

Recently, this one cracked. And many tourists took to social media claiming that pieces of glass in the walkway broke away altogether.

The government of course is spinning a different story.

They reported that the glass walkway is completely safe, even though they’ve decided to close the bridge ‘temporarily’.

This is probably the best metaphor for the entire Chinese economy right now, because the glass is cracking everywhere.

China’s manufacturing sector has been weak for months, and its industrial sector is completely in the dumps.

This week the deputy head of the China Iron and Steel Association said that “China’s steel demand has evaporated at unprecedented speed as the nation’s economic growth slowed.”

There are more signs of contraction all across the economy.

Most notably, years and years of idiotic capital allocation are beginning to muster serious consequences.

In an effort to stimulate growth and create employment, China’s national, provincial, and local governments have spent unfathomable amounts of money on useless infrastructure, primarily funded with debt.

You’ve heard of these infamous bridges to nowhere and empty train stations.

Now several Chinese companies have started to default on these debts, including two state-owned enterprises.

The bursting of this debt bubble has already caused major problems in the banking sector (which is a massive 3x the size of China’s economy), as well as in financial markets.

Chinese stocks saw a major collapse several months ago, and we may see a major crisis in the banking sector very soon.

Local Chinese with any real savings have been scrambling for months to move their money offshore.

And this ‘capital flight’ is reaching epic levels. In August alone, $141 billion was sucked out of China. That’s more than the entire GDP of Nevada or Ukraine.

Sooner or later (probably sooner) the combination of loan defaults and capital flight is going to cause major problems in the Chinese banking sector.

I expect we’ll see the mother of all bank bail-ins and withdrawal controls in China.

But what really gets me is the Chinese government’s Jekyll and Hyde approach to the crisis.

The Chinese are known for being strategic thinkers. This goes back thousands of years to the days of Sun Tzu. Leaders don’t act haphazardly, they make long-term plans and execute in a disciplined manner.

But it’s becoming pretty obvious now that the Chinese government is in REACTION mode.

The stock market crash over the summer wasn’t planned. So they reacted. Poorly, at that.

In response, they jailed stock speculators, and even did the unimaginable–encouraging citizens to borrow money using their homes as collateral, then invest the loan proceeds in the stock market.

They promised several times to not devalue the renminbi. But then they did.

Then in order to stem the debilitating capital flight, they imposed even more severe capital controls and withdrawal restrictions for Chinese citizens traveling overseas.

But then yesterday in a nod to the IMF, they announced a pilot program to EASE capital controls and allow citizens to directly purchase foreign assets.

And now, poof, they ended three decades of the One Child Policy.

None of this makes any sense. There’s no common thread or direction in Chinese policies anymore. No more long-term thinking.

Now it’s all extremely reactive. The grand plans and strategy have gone out the window, and instead they’re taking it day-by-day, making it up as they go along.

To me, this is a sign of how bad things really are.

Their system is based on a bunch of unelected policymakers sitting in a room and making decisions to control one of the largest economies in the world.

As China’s example shows, there are too many moving parts, too many levers to control. And it’s impossible to expect that some committee is going to get it right without eventually faltering.

But as you can probably realize, it’s not just the Chinese who have engaged this absurd system. Most of the world does it too. In fact, the West invented it.

The US and Europe have their own unelected committees sitting in rooms making policy decisions that affect the lives and livelihoods of everyone engaged in economic activity.

And for us to simply sit back and trust them to be smart enough to flawlessly steer the ship is incredibly foolish.