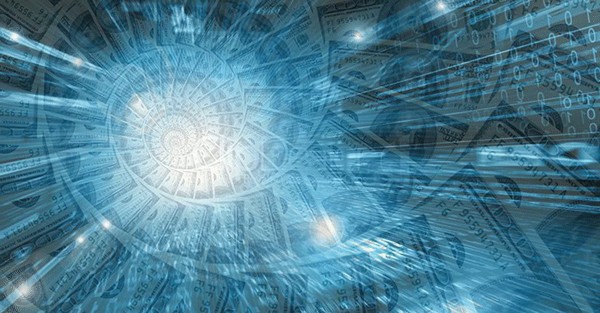 It was back in May 2010 that the very first ‘real world’ Bitcoin transaction was conducted: 10,000 bitcoins traded for two Papa John’s pizzas.

Today that transaction would be worth nearly $4 million, probably making those the most expensive pizzas in the history of the world.

But back then it was considered revolutionary to trade a ‘digital’ currency, something that few people really understood at the time, for a real product.

People are still skeptical of digital currency. But the concept itself is not so esoteric.

As Jim Rickards reminded me some time ago, MOST currencies are digital, even the US dollar.

The Federal Reserve’s estimate of US dollar money supply is $12.1 trillion; yet only about 10% of that is physical cash in circulation.

The rest—more than $10 trillion—is simply a series of entries in banks’ core system databases.

In other words, the money in your savings account isn’t piled up inside your bank’s vault. Far from it.

And yet we transact with these digital currency units all the time.

Whenever you use a credit card or send a bank transfer, you’re using the digital form of your currency.

This concept actually dates back to the Middle Ages when Italian bankers realized that they could conduct their transactions without physical money.

Rather than risk transporting gold coins across the countryside, medieval bankers merely annotated their ledgers with debit and credit entries.

They didn’t have the computers, but it was the same concept– they kept track of transactions and balances on account ledgers, instead of with physical money.

In the late 1960s, the IMF took this idea to the next level when they created their own digital currency for the exclusive use of governments and central banks.

And even though the IMF’s balance sheet totals nearly 300 billion SDR (around $211 billion USD), not a single SDR exists in physical form.

100% of the SDR money supply is digital. Just like Bitcoin, it exists in computer databases, making it the digital equivalent of a 500-year old accounting system.

There is one key difference, though.

No one controls Bitcoin. But dollars, euros, SDR, etc., are controlled by central banks.

Federal Reserve, Banque du Canada, Bank of Japan, etc. all decide how much of their currencies to create.

The SDR in particular is a total scam; the entire reason it was created was because the system didn’t have enough real savings.

So they ‘solved’ the problem by creating a new digital currency that allowed them to easily conjure more money out of thin air.

But the even bigger risk is the commercial banks, which control your account balances. They keep all the records and ledgers, they hold all the keys.

This means that the ‘money’ in your savings account isn’t really yours. You don’t actually have any savings.

What you really have is a claim on your bank’s savings. Your account is just an entry in the liability column of their digital ledger.

When you make a deposit, you’re trading your money for a banker’s promise to repay you.

And there are countless regulations giving them the authority to break that promise.

(If you want to test this premise, try withdrawing $25,000 just to see how your bank reacts.)

That’s the system that controls your wealth today. It’s almost entirely digital. And it’s run by unelected bureaucrats whose interests are not aligned with your own.

This is not a free system. And any rational person should consider parking at least a rainy day fund outside of this system.

Bitcoin is certainly one option.

No one controls it, which is a novel concept in an era when governments and central banks control everything from the value of your savings to what you can/cannot put in your own body.

But if Bitcoin isn’t your flavor just yet, consider other options.

Gold and silver still have incredible merit since they cannot be conjured out of thin air by central banks.

And even holding physical cash is a much better alternative than keeping everything inside a highly centralized banking system.

2 thoughts on “Have you heard of this digital currency that’s a total scam?”