Western foreign policy is playing right into the hands of fundamentalist terror groups – they need you to hate Islam.

Source: How US Foreign Policy has Created a Million Osama Bin Ladens Since 9-11 | The Free Thought Project

http://thefreethoughtproject.com
By Matt Agorist
on November 17, 2015

As the military industrial complex addresses the recent Paris attacks, the topic of most conversations in that community is that ‘we need more security.’ From the current CIA director blaming the 4th Amendment for the attacks to the former CIA director blaming Edward Snowden, these ‘security experts’ are missing the point entirely.

For decades, the US and its Western allies have been violently and frequently meddling in the Middle East. Beginning with the clandestine overthrow of democratically elected leaders, moving on to financing violent extremist groups, and morphing into full blown invasions of entire countries, the Middle East has been the target of… 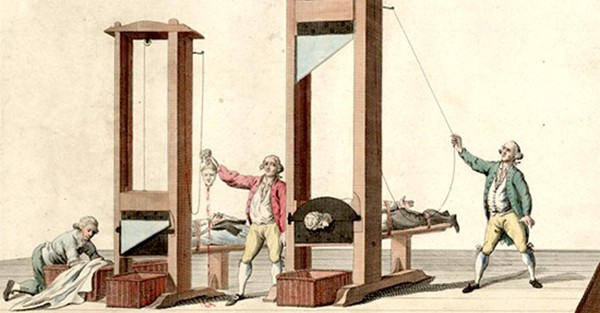 On April 5, 1793, decorated French military commander Charles Dumouriez caused a sensational panic in Paris when he fled the country and defected to Austria.

It had been nearly four years since French peasants stormed the Bastille, the event that historians generally regard as the start of the French Revolution.

And hardly a week had gone by since without some major crisis, emergency, or tragedy in France.

There were regular violent riots across the country– in Paris, other major cities, and even the rural countryside. Widespread massacres were commonplace.

And given that one of the key goals of France’s new revolutionary government was to eliminate Christianity from the nation, civil war between religious factions broke out as well.

To cap things off, France was under constant threat of foreign invasion.

Austria and Prussia were not only waging conventional war against France, but both nations had sent highly trained agents to infiltrate French borders to pursue violence and chaos from within.

It was exhausting. French people were living in perpetual fear, and the wanton death of innocents had become an unfortunately normal part of life.

So when it was found that Dumouriez (a French citizen) had defected to the enemy, people hit their breaking points. Enough was enough. And they cried out to the government to save them.

The very next day, on April 6, 1793, the new French government established the Committee of Public Safety (though it was originally known as the Danton Committee).

The Committee was given broad, emergency powers since it was a time of such crisis.

And under the leadership Maximilien Robespierre, the French people got their protection.

Robespierre passed the ‘Law of Suspects’, allowing the government to essentially imprison anyone they wanted for any reason.

It was impossible to tell friend from foe back then; you never knew if someone was a loyalist, or a Christian, or an Austrian spy, or any number of counter-revolutionaries.

So people were required to carry special certificates indicating that they were good and dutiful citizens. Those without would be imprisoned, and potentially executed.

The University of Chicago estimates that nearly 30,000 either died in prison or were executed as a result of this law.

Then there was the Law of the Maximum, which attempted to stabilize an ongoing financial crisis by fixing the prices of goods and services in the country. The law also imposed the death penalty on those who did not follow the rules.

They also passed the Law of 22 Prairial, which awarded the Committee even more power to arrest, try, and execute anyone deemed to be suspicious or disloyal.

The law also prevented anyone accused of a crime from being able to call witnesses or have defense counsel.

Plus it required that ALL citizens report potentially suspicious or disloyal neighbors to the Committee. If you see something, say something.

As you are likely well aware, this period in French history became known as the Reign of Terror, or often simply ‘the Terror’.

Coincidentally, this is where the first modern use of the word ‘terrorist’ is found.

Except that it wasn’t used to describe the counter-revolutionaries. Or the rebels. Or the foreign agents.

It turns out that “terrorist” was originally a term used to describe the government officials who created and executed these oppressive tactics under the guise of keeping people safe from their enemies.

Governments have a dangerous tendency to never let a serious crisis go to waste.

The US government spent trillions of taxpayer dollars to fight a War on Terror that made the world less safe and Americans less free, all to protect them from a threat that has a statistical likelihood of 0.0%.

(You’re far more likely to be shot by a police officer than to ever even see a terrorist.)

Yes, the desire for revenge runs deep. And that’s understandable.

But the greatest thing to fear is not men in caves. It is the consequent loss of freedom and the never-ending cycle of costly, destructive war.