© Pascal Lauener / Reuters
Cancer patients are finally catching a break, as Australian researchers have tested a miracle drug that leads to big improvement in a majority of cases, and total recovery in some. The drug targets a specific protein that helps cancer cells survive.

The Melbourne-based trial took place over four years and tested 116 patients. It was shown by researchers at the Royal Melbourne Hospital and Peter MacCallum Cancer Centre that the drug Venetoclax can greatly reduce cancer blood cells.

Positive results were seen in 79 percent of cases involving patients suffering from chronic lymphocytic leukemia. Some patients who had previously undergone treatment were left as good as new after agreeing to the new pill trials.

This is indeed historic news, as it marks the…

João Pereira de Souza saved the life of a small Magellanic penguin 5 years ago, and the bird has rarely left his side since. He always returns to the man’s house.

João Pereira de Souza, a retired bricklayer from Rio de Janeiro, shares a heartwarming bond with a Magellanic penguin native to South America’s Patagonian region. For the past five years, the bird seems to have altered its natural migratory pattern just to be able to visit de Souza several times a year.

The unlikely friendship began in 2011, when de Souza found the bird, nicknamed Jinling, soaked in oil on the beach near his house. He brought the penguin home, cleaned him up, and offered him a meal of cool sardines and…

Twenty-five years and my life is still
Trying to get up that great big hill of hope
For a destination
I realized quickly when I knew I should
That the world was made up of this brotherhood of man
For whatever that meansAnd so I cry sometimes
When I’m lying in bed
Just to get it all out
What’s in my head
And I, I am feeling a little peculiar
And so I wake in the morning
And I step outside
And I take a deep breath and I get real high
And I scream from the top of my lungs
What’s going on?

And so I cry sometimes
When I’m lying in bed
Just to get it all out
What’s in my head
And I, I am feeling a little peculiar
And so I wake in the morning
And I step outside
And I take a deep breath and I get real high
And I scream from the top of my lungs
What’s going on?

Great speech from Lori Wallach, Director and Founder of the Global Trade Watch at Auckland Town Hall two nights ago (in front of 900 people).

She analyzes why Obama is several dozen votes short of getting the TPPA ratified in the US House. Now that they have seen the text, both Democratic and Republican congressmen are coming out against TPPA – in large part because congress people who supported fast track on TPPA have virtually no chance of getting re-elected in November.

She calls the treaty a “5,000 page door stop” and describes the signing on February 4 in Auckland as a “psyche-out.”

Paulette, these pictures are adorable! Bless you for all you do to save these precious ones from kill shelters. It’s an honor to get the word out.
Please, for those who haven’t already read Pauline’s book, it’s a must read, please show some WP love & support! ❤

The Persecution of Mildred Dunlap

ALL PROFITS FROM MY BOOKS GO TO HELP GET DOGS LIKE THESE OUT OF KILL SHELTERS. SO FAR IN 2016 SOME OF THE DOGS WHO HAVE BEEN SAVED.

Baby getting love on freedom ride

Baby with new happy family is feeling the love

Baby hanging with new pal-dad at the beach

Baby getting spa treatment with a bath to follow. The family sent more photos, clearly a sign they are all madly in love with their new girl. Lucky Baby!

11 year-old Brucey has been rescued. What a handsome boy and now a happy boy.

Chiquis has been rescued from the high-kill Downey Shelter.

Chiquis’ freedom photo. Lapping up the love from new mom. Love the looks on their faces.

Giselle’s been rescued and now is happy at home

You wouldn’t be surprised to come in dead last. After all, you didn’t put in much effort. Actually, you went out of your way to make yourself lesscompetitive. So you would expect to lose.

But this is exactly what U.S. politicians have been doing for years: passing tax laws that sabotage the country’s global economic competitiveness.

As you can see in the chart below, the U.S. has the highest effective corporate income tax rate in the developed world. This is a major reason why the U.S. is lagging behind in the global economic marathon. 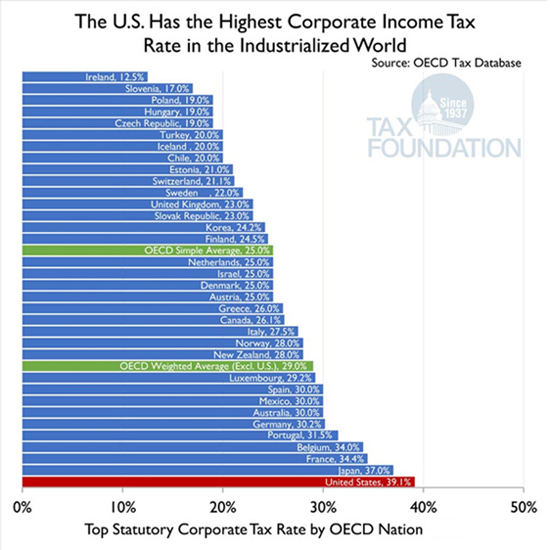 These “worst in the developed world” tax laws are clearly hurting the global competitiveness of U.S. companies.

Oppressive U.S. corporate tax liabilities make doing business similar to trying to swim in a lead jacket. So it’s no surprise that an increasing number of productive people and companies are trying to rip off that lead jacket so they can stay afloat.

At this point, it’s more than just a trickle. It’s an increasing trend.

Putting the Beast on a Diet

Over the past couple of years, dozens of high-profile U.S. companies have moved abroad to lower their corporate income tax rate. No surprise, this makes them more globally competitive.

DE Master Blenders—the tea and coffee arm of Sara Lee—moved to the Netherlands.

And these are just a few of the most prominent companies breaking the shackles.

The strategy these companies use is called an inversion. It’s where a U.S. company merges with a foreign company in a country with lower corporate taxes and reincorporates there.

Meddling politicians and the mainstream media like to howl and shriek about inversions. They say the practice is “unpatriotic” or “un-American.” That’s nonsense. The fact is, inversions are perfectly legal. Nothing in the current incarnation of the U.S. Tax Code prohibits them.

Chuck Grassley, a Republican senator from Iowa has said, “These expatriations aren’t illegal. But they’re sure immoral.”

I beg to differ.

Why would anyone give the thieving bureaucrats in DC a penny more than they legally have to?

As far as I’m concerned, there is nothing ethically or morally wrong with inversions. Moreover, they are vital for starving the Beast.

I say, the less money available to politicians and bureaucrats, the better. It means they have less to spend on mischief like provoking wars or bribing voters with more welfare.

Johnson Controls is the latest high-profile company to put the Beast on a diet.

Johnson Controls is a Milwaukee-based $23-billion manufacturing giant. On Monday, the company announced plans to merge with Tyco International and reincorporate in Ireland.

The move will save the company over $150 million in taxes every year.

Neither Johnson Controls nor any other U.S. company has an obligation to fill government coffers. But they do have an obligation to their shareholders to avoid waste. That’s why they’re moving to Ireland, away from the worst corporate tax environment in the world.

Contrary to government propaganda, the companies trying to stay competitive aren’t the villains in this story.

The villains are the wasteful politicians who passed the “worst in the developed world” tax laws in the first place.

Right now, it is highly unlikely politicians will reduce the onerous U.S. corporate tax burden. Given the current political dynamics—ramped-up spending on welfare and warfare policies, as well as an “eat the rich” mood—taxes have nowhere to go but up. This means the corporate exodus will continue.

It’s never good when a country drives away its most productive companies and people. It’s making the U.S. economy even more fragile.

These foolish policies will actually make the U.S. government morefinancially desperate. That’s because they will ultimately result in fewer tax dollars.

Like most governments that get into financial trouble, I think the U.S. will keep choosing the easy “solution”…money printing on a massive scale.

This has frightening implications for your financial security. These politicians are playing with fire and inviting a currency catastrophe. This is a big reason why I think everyone should own some gold.

Gold is the ultimate form of wealth insurance. It has preserved wealth for millennia through every kind of crisis imaginable. It will preserve wealth during the next crisis, too.

But, if you want to be truly “crisis-proof”, there is more you can do…

Most people have no idea how bad things can get when an economy collapses, let alone how to prepare…

How will you protect yourself in the event of a crisis? This just-released video will explain what you need to know to get started. Click here to watch it now.

Cheech and Chong
We all have seen absurdities in our daily struggle to understand. Can someone explain this? It cannot be true, can it?

The Free Thought Project.com
Unfortunately, this is a true story: Full story

If only citizens of the US had the balls and brains to protest our corrupt gov’t, hold our officials accountable for their war crimes against humanity, we wouldn’t be infecting the rest of the world with coloured revolutions, regime change and installed puppet gov’t.
Even the EU are gathering protests as their citizens have had enough of Washington’s interference.
Slowly but surely ppl are finally waking up! *\o/*

Montenegro is a former part of Yugoslavia and Serbia. Being located in the middle of NATO’s domain – the Mediterranean – next to other NATO members, having no army of its own and being a small country with not much of an economy, Montenegro has no strategic value for NATO whatsoever.

Because of that Montenegro had been left alone all these years. Suddenly, last year PM Đukanović announced that the country would be joining NATO. Why, you may ask, if there is no value to Montenegro being a NATO member?

There is one overriding reason: Montenegro’s economic and cultural ties to Russia! Due to the closeness of culture and mentality, lots of Russians go to Montenegro for Mediterranean vacations, many Russians have vacation properties there, plus, Russian business is a very…