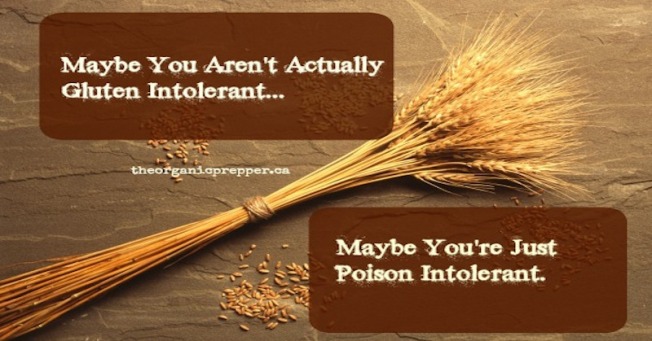 Over the past couple of years, I had the unpleasant experience of having bloodwork done to confirm that I am gluten intolerant, only to have it come back and say, “Nope, you’re just crazy.” The same thing happened to my good friend Melissa Melton, who was terribly ill before she cut wheat out of her life. It’s happened to scores of other people, who pass the test for the anti-gliadin antibodies but still know that their health issues directly correlate with what they eat.

Now we may know why. The tests were right. I’m not gluten intolerant.  I’m poison intolerant.

I read a mind-blowing article last night that put it all together for me. (Please go read the entire piece by Sarah, the Healthy Home Economist.)

Scary stuff, weed is the cure.

Antidepressants in America are causing suicide rates to soar, especially among young women

(NaturalNews) New data from the Centers for Disease Control and Prevention (CDC) shows a significant jump in the suicide rate in America in the years from 1999 to 2014. The rise has been particularly sharp among women and girls. Is it any coincidence that the percentage of Americans who take antidepressants nearly doubled during the same period?

Some parties with vested interests in Big Pharma are trying to blame this increase on the “black box” warning labels that were introduced by the FDA in 2004. These labels warn that the drugs increase the suicide risk in young adults and children, and some people are saying that these warnings are scaring people…

The world’s most famous whistleblower, Edward Snowden, took Twitter by storm when he created an account last year. Since, he has criticized everyone from the FBI to Google, so his latest post on the CIA should come as no surprise.

Commenting on revelations the CIA “inadvertently” destroyed a copy of the 6,700-page torture report, Snowden questioned the agency’s official story.

“I worked @CIA. I wrote the Emergency Destruction Plan for Geneva. When CIA destroys something, it’s never a mistake,” he tweeted Wednesday, openly challenging the CIA’s claim. He also shared an article detailing the news.

I worked @CIA. I wrote the Emergency Destruction Plan for Geneva. When CIA destroys something, it's never a mistake. https://t.co/S1VULfE4NY

Snowden previously worked for the CIA and as an NSA contractor before leaking documents revealing the U.S. government’s…

We have been following how the BRICS would implement their ambitious free energy transition from fossil fuels, and over the last weekend, March 31 to be exact,

China announced that it is planning to interconnect all existing and soon to be constructed solar farms for continuous power supply throughout the globe.

Last year, Sausalito Marin City School District became the very first completely organic and non-GMO district in the country. Its two schools are Bayside MLK Jr. Academy in Marin City and Willow Creek Academy in Sausalit. The program aims to improve students’ health and educate them about food, agriculture, and the environment. (source)(source)

The program was initiated by Judi Shils, the founder of the non-profit education and advocacy group Turning Green and the director of The Conscious Kitchen.

Source: The Global Energy Reset is On | Covert Geopolitics

Fully loaded oil tankers are anchored in ports worldwide, while solar panels are getting cheaper by the day as global competition heats up.

The global energy reset has begun.

Just three years ago, US warehouses were flooded with Chinese made solar panels due to China’s goals to reduce its worsening air pollution and to free its economy from oil dependency.

Between 2011 and 2013, warehouses across Southern California were stuffed with millions upon millions of Chinese-made solar panels. How the panels got here, and what ultimately became…

Manufacture a human soul? I think not….

There were nearly 150 bright minded scientists who attended the closed-door meeting at Harvard Medical School in Boston. They were all told explicitly to not contact the media and not to tweet during the meeting on March 10th.

The surreptitious nature of this conference is strange enough, but the subject matter is downright alarming: artificial genome creation.

Basically, a bunch of scientists got together in secret to discuss the future of growing babies in test tubes, without parents.

Now, genome modification has been around for a long time. But especially in the last decade, the science of DNA has developed to a point where we can clone animals and select which genetic and physical traits our children are born with.

The science is incredibly…

Efficiency of antibiotics falling as deaths in EU and US hit around 50,000 annually from infections drugs can no longer treat

The “antibiotic apocalypse” may already be upon us. According to Dame Sally Davies, chief medical officer for England, 50,000 people are dying every year in Europe and the US from infections that antibiotics have lost the power to treat.

Davies has been at the forefront of the UK’s efforts against antimicrobial resistance (AMR) and taken on a global leadership role. She has described the threatened loss…

American hedge fund billionaire George Soros is back in the headlines for two things: his most recent funding projects and new revelations that the shadowy political donor has been hiding his fortune from US regulators with Mossack Fonseca, the firm behind the Panama Papers leak. Soros has a total of three offshore companies through Mossack Fonseca alone (certainly more to be revealed in the future).

As we know from earlier revelations, Soros financed a large group of journalists (about 400 in total), who were hired to dig up offshore dirt on Vladimir Putin and various other heads of state and celebrities, using the Panama papers leak.

It is clear to me that all others were a smoke screen, while the actual target was Vladimir Putin and Russia, as part of the escalating hybrid 4D info war. This is especially undeniable because all Western, especially British, publications, plus…

Below is a video interview with expert, Oleg Chagin, Director of the Institute of Social Anthropo-genesis (in Russian). To summarize, he talks about a dire situation in Ukrainian army. Some in the army still do believe the Kiev propaganda that Russia is the aggressor against whom poor Ukraine has been fighting for two hard years. But many don’t. Meanwhile, the army as a whole has been demoralized to the core. It has been lowered to the role of a terrorist organization, bombing civilians and country’s own citizens, to boot. Some in the army, perhaps without realizing it, are in fact sabotaging orders of their command.

Chagin goes on to say that it’s impossible to divide Russia from Ukraine and vice versa. The tragedy is that many of the officers would have friends and comrades on the other side, aka, in DNR and LNR, or in Russia. They don’t want to fight…