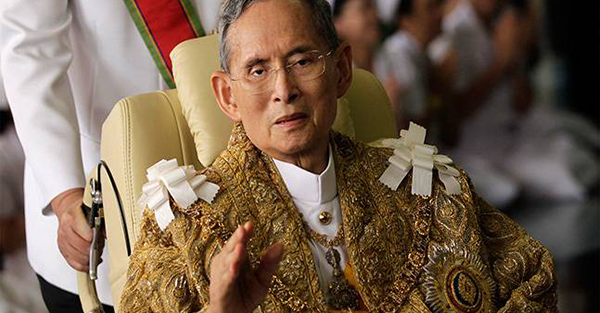 The King of Thailand died yesterday, and the military junta running the country has declared an entire year of mourning.

I saw a quick headline from The Economist which screamed, “The death of the Thai king throws the country into turmoil.”

This must be a different country from the one I know.

I’ve been traveling to Thailand 3-4 times per year over the past decade, and we have staff who have been living there for at least that long.

It’s perfectly clear to us what impact a new king is going to have on Thailand: there will be a new face on the currency.

And that’s about it.

It’s true that the late King was widely revered, elevated to god-like status by his people.

But in Thailand, as in most places, “he who has the guns makes the rules.” And that has long been the military.

Over the past 15 years, the powerful elite in both the military and wealthy families who actually control the country have engineered several coups to put their own people in power and ensure their interests wouldn’t be interrupted upon the King’s death.

And given that the Crown Prince and heir apparent has spent most of his life outside of Thailand, it’s unlikely there will be any meaningful change to the status quo.

Lately he has been living in Germany with, at least until last year, his pet poodle FuFu who was promoted to the rank of Air Chief Marshall in the Royal Thai Air Force.

So something tells me the Thai political system isn’t going to be receiving a much-need enema anytime soon.

The military and powerful elite have spent the past several years preparing for this moment to ensure that everything will be, as Thai people like to say, “same same, but different.”

In other words, nothing more than a different face on the currency.

There has been worry and concern for years that Thailand would plunge into chaos upon the king’s death… or that Thai assets and financial markets would collapse.

Stocks had in fact been sliding for days after the rumors began circulating that the king was gravely ill.

Then, as soon as he passed away, stocks actually started to climb, with the MSCI Thailand Capped ETF surging since the King’s death.

Shares of Thai Airways, for instance, are up 15% this morning.

So it appears that predictions of Thailand’s demise have been somewhat exaggerated.

There always seem to be these experts who predict dire chaos and consequences immediately following some event—just like Brexit, just like Colombians’ rejection of the FARC peace treaty.

It almost never happens that way.

The most severe consequences are seldom triggered by a single event, but rather years… decades of bad decisions and negative trends that build into a giant tidal wave of inevitability.

The same principle applies to the US presidential election next month.

No matter who wins, the world isn’t going to explode.

Nor is it going to be all sunshine and buttercups.

Regardless of which candidate the Electoral College chooses to become the next President of the United States, there is no stopping the inevitability of US default, its $20 trillion debt, or the insolvency of Social Security and Medicare.

Hillary Clinton was privately in support of the Trans Pacific Partnership but wanted wiggle room to publicly criticize it, according to a leaked email from Clinton speechwriter Dan Schwerin.

In the 2015 email released by Wikileaks, Schwerin was writing a speech that assumes “she’s ultimately going to support both the Trade Promotion Authority and the TPP” but gives herself an out to publicly backtrack from the corporate “trade” deals.

“This draft assumes that she’s ultimately going to support both TPA and TPP,” Schwerin wrote. “It focuses on what needs to happen to produce a positive result with TPP, and casts support for TPA as one of those steps.”

“It also says that we should walk away if the final agreement doesn’t meet the test of creating more jobs than it displaces, helping the middle class, and strengthening…