A few days ago several large online repositories of free books and academic articles were pulled offline. Sci-Hub, BookFi and LibGen had their domain names taken away after Elsevier beat them in court. However, the site’s operators are not planning to cease their activities and are continuing their operations through alternative domains and on the dark web.

As a result the operators were ordered to quit offering access to any Elsevier content and the associated registries had to suspend their domain names.

After a few days the registries did indeed disable the domain names mentioned in the lawsuit which are currently all unavailable, much to the disappointment of the sites’ users.

However, the operators of Sci-Hub, BookFi and LibGen have no intention of complying with the U.S. court order. Instead, they’re rendering the domain suspensions ineffective by switching to several new ones.

At the time of writing LibGen is readily available again via several alternativedomains. Except from a new URL, not much has changed and the site is fully operational. Similarly, BookFi is also accessible via various domains including Bookfi.info.

The same is true for Sci-Hub, which changed its address to a .io domain. TF spoke with the site’s operator, Alexandra Elbakyan, who confirmed the move and is still hopeful that she can get the original domain back.

“Several new domains are operating already,” Elbakyan says. “For some reason, I think that in future justice will prevail and all our domains will be unblocked.”

To make sure that the site remains accessible, Sci-Hub also added an .onion address which allows users to access the site via Tor, and bypass any future domain name suspensions.

Despite the domain problems and a disappointing court order, Elbakyan is glad that the case brought attention to the paywall problems academia faces.

“In some sense, this case was helpful: more people now agree that copyright should be destroyed, and that academic publishing needs serious reform,” Sci-Hub’s operator says.

“Before, many people would say: why bother acting against copyright laws if they can be so easily bypassed? Or what is the point in an open access movement if anyone can download any paid article for free?”

Elsevier may have the law on their side, but the largest academic publisher can’t count on universal support from the academic community.

In recent weeks many scientists and scholars have come out in support of Sci-Hub, BookFi and LibGen, arguing that access to academic research should be free and universal.

For Elbakyan and others this support offers enough motivation to continue what they do.

In a lawsuit filed by Elsevier, one of the largest academic publishers, Sci-Hub.org is facing millions of dollars in damages. However, the site has no intentions of backing down and will continue its fight to keep access to scientific knowledge free and open. “I think Elsevier’s business model is itself illegal,” Sci-Hub founder Alexandra Elbakyan says. 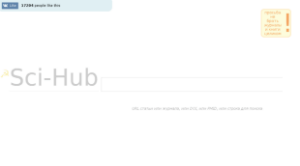 With a net income of more than $1 billion Elsevier is one of the largest academic publishers in the world.

The company has the rights to many academic publications where scientists publish their latest breakthroughs. Most of these journals are locked behind paywalls, which makes it impossible for less fortunate researchers to access them.

Sci-Hub.org is one of the main sites that circumvents this artificial barrier. Founded by Alexandra Elbakyan, a researcher born and graduated in Kazakhstan, its main goal is to provide the less privileged with access to science and knowledge.

The service is nothing like the average pirate site. It wasn’t started to share the latest Hollywood blockbusters, but to gain access to critical knowledge that researchers require to do their work.

“When I was working on my research project, I found out that all research papers I needed for work were paywalled. I was a student in Kazakhstan at the time and our university was not subscribed to anything,” Alexandra tells TF.

After Googling for a while Alexandra stumbled upon various tools and services to bypass the paywalls. With her newly gained knowledge, she then started participating in online forums where other researchers requested papers.

When she noticed how grateful others were for the papers she shared, Alexandra decided to automate the process by developing software that could allow anyone to search for and access papers. That’s when Sci-Hub was born, back in 2011.

“The software immediately became popular among Russian researchers. There was no big idea behind the project, like ‘make all information free’ or something like that. We just needed to read all these papers to do our research,” Alexandra.

“Now, the goal is to collect all research papers ever published, and make them free,” she adds.

Of course Alexandra knew that the website could lead to legal trouble. In that regard, the lawsuit filed by Elsevier doesn’t come as a surprise. However, she is more than willing to fight for the right to access knowledge, as others did before her.

“Thanks to Elsevier’s lawsuit, I got past the point of no return. At this time I either have to prove we have the full right to do this or risk being executed like other ‘pirates’,” she says, naming Aaron Swartz as an example.

“If Elsevier manages to shut down our projects or force them into the darknet, that will demonstrate an important idea: that the public does not have the right to knowledge. We have to win over Elsevier and other publishers and show that what these commercial companies are doing is fundamentally wrong.”

The idea that a commercial outfit can exploit the work of researchers, who themselves are often not paid for their contributions, and hide it from large parts of the academic world, is something she does not accept.

“Everyone should have access to knowledge regardless of their income or affiliation. And that’s absolutely legal. Also the idea that knowledge can be a private property of some commercial company sounds absolutely weird to me.”

Most research institutions in Russia, in developing countries and even in the U.S. and Europe can’t afford expensive subscriptions. This means that they can’t access crucial research, including biomedical research such as cancer studies. 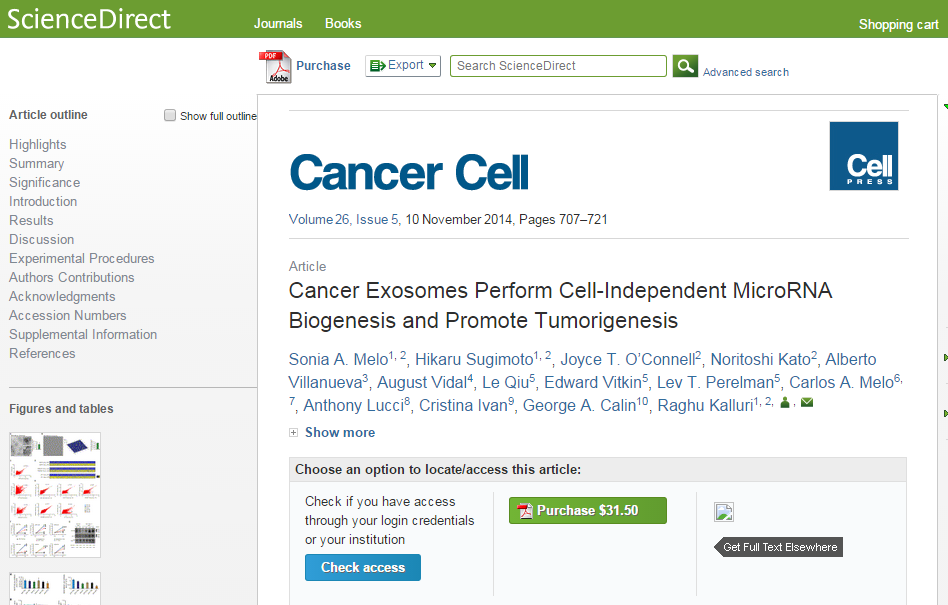 So aside from the public at large, Sci-Hub is also an essential tool for academics. In fact, some researchers use the site to access their own publications, because these are also locked behind a paywall.

“The funniest thing I was told multiple times by researchers is that they have to download their own published articles from Sci-Hub. Even authors do not have access to their own work,” Alexandra says.

Instead of seeing herself as the offender, Alexandra believes that the major academic publishers are the ones who are wrong.

“I think Elsevier’s business model is itself illegal,” she says, pointing to article 27 of the UN declaration on human rights which reads that “everyone has the right freely to participate in the cultural life of the community, to enjoy the arts and to share in scientific advancement and its benefits.”

The paywalls of Elsevier and other publishers violate this right, she believes. The same article 27 also allows authors to protect their works, but the publishers are not the ‘authors,’ they merely exploit the copyrights.

Alexandra insists that her website is legal and hopes that future changes in copyright law will reflect this. As for the Elsevier lawsuit, she’s not afraid to fight for her rights and already offers a public confession right here.

“I developed the Sci-Hub.org website where anyone can download paywalled research papers by request. Also I uploaded at least half of more than 41 million paywalled papers to the LibGen database and worked actively to create mirrors of it.

“I am not afraid to say this, because when you do the right thing, why should you hide it?” she concludes.

Note: Sci-Hub is temporarily using the sci-hub.club domain name. The .org will be operational again next week.

One thing in US history is consistent throughout every single election cycle — allegations of voter fraud. These allegations, however, are not the ramblings of a kook with tinfoil wrapped around his head, they are substantiated and reach as high as the Supreme Court. Don’t believe it? Ask Al Gore and George W. Bush.

If you think that the ruling class would leave it up to the voters to decide who gets elected, you should think again. Every single candidate who actually challenges the status quo becomes a target.

This year is one of the worst years ever for voter fraud, as it’s been captured on video — multiple times.

Last Month, Hillary Clinton declared herself the winner of the Democratic Party in the much-anticipated Iowa caucuses. Immediately after the ‘victory,’ Clinton went on CNN to bask in her counterfeit fame.

“I am so thrilled,” Clinton told Wolf Blitzer in an interview Tuesday afternoon. “My luck was not that good last time around, and it was wonderful to win the caucus, to have that experience.”

However, fraud was so rampant that a C-SPAN video caught it. Clinton’s ‘victory’ would have nothing to do with ‘luck,’ and her premature declaration of the “razor thin” tie, was no mistake.

When campaign minions aren’t fudging the physical vote count, computers, tasked with tallying the vote, are susceptible to hacking.

In 2006, the documentary Hacking Democracy, exposed Diebold and their role in rigging elections with their electronic voting machines.

He is notable chiefly for making a series of whistleblower allegations about his former employer and about Republican Congressman Tom Feeney, including an allegation that in 2000, Feeney and Yang Enterprises requested Curtis’s assistance in a scheme to steal votes by inserting fraudulent code into touch screen voting systems.

Curtis is seen in the video below testifying under oath in front of the U.S. House Judiciary Members in Ohio.

He tells the members how he was hired by Congressman Tom Feeney in 2000 to build a prototype software package that would secretly rig an election to sway the result 51/49 to a specified side.

After watching the video, you’ll know why true change is hard to come by.

We encourage you to share and republish our reports, analyses, breaking news and videos (Click for details).

Contributed by The Free Thought Project of thefreethoughtproject.com.

The Free Thought Project is dedicated to holding those who claim authority over our lives accountable.