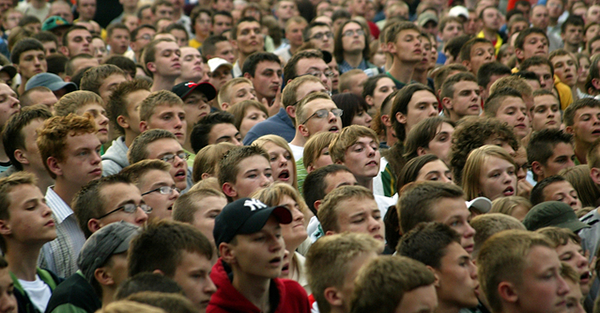 One of the most consistent aspects of travel is that, no matter where I go, the Clinton News Network (CNN) follows me around like the albatross in Rhyme of the Ancient Mariner.

So when I woke up this morning here in Thailand and flipped on the TV, the first thing I saw was Wolf Blitzer having an orgasm every time Hillary won an electoral vote.

It’s almost comical to suggest there was any semblance of objectivity throughout the entire cycle.

Hillary Clinton had the full and unabashed backing of the entire media establishment.

Yet all of those big guns proved to be ineffective against a citizenry that’s fed up with the status quo.

At least the losing side has accepted its defeat with quiet dignity.

University students across the country have come out of their safe spaces to protest by the thousand, chanting “F*ck Donald Trump” and “Not my President”.

The students’ sudden fury may be what caused the Canadian government’s immigration website to temporarily go down (though I’m sure this will somehow be blamed on the Russians).

Celebrities had some real gems like “Well, congratulations America you f–ked this one up,” and “I feel like I’m about to give birth to a baby that’s already dead.”

Comedian Chelsea Handler posted one of the most bizarre Tweets of the night, saying “My condolences to the President and First Lady. We will keep aiming high. We may not have you honored you this time, but we will honor you.”

So apparently this exercise of American democracy has dishonored the President.

But the word “never” apparently means 49 minutes to a Nobel laureate, because that’s how long it took for the S&P 500 to turn positive for the day once the market opened.

Krugman followed up that genius prediction with an even bigger one, writing that “we are probably looking at a global recession, with no end in sight.”

(I have heard that he suffers from myopia…)

Then there were all the all the expressions of shock from Clinton supporters who found the loss incomprehensible. They couldn’t possibly understand why she lost.

It reminded me of a wonderful quote from George Orwell (author of 1984) who wrote in a scathing essay on nationalism at the end of World War II:

The nationalist not only does not disapprove of atrocities committed by his own side, but he has a remarkable capacity for not even hearing about them.

I thought the late-night quickie from Clinton campaign chairman John Podesta summed it up perfectly.

While Hillary stayed in her $20,000/night suite at the Peninsula Hotel, Podesta was sent to tell the crowd of Clinton supporters that “She is not done yet!”

Nonsense. It was a big fat lie. Minutes later she called Donald Trump to concede the election.

Anyone trying to understand why she lost might take note of this deceit– even at the bitter end. She lied to her own supporters.

So here we are, disgust from so many, euphoria from others, and LOTS of uncertainty about what’s to come.

Just remember that uncertainty creates both significant risk as well as great opportunity.

Meanwhile, all the disgust and euphoria– these are intense emotions that cloud judgment.

We human beings tend to make very bad decisions… and miss a lot of important cues… when we’re emotional.

Example– while the entire world was transfixed on the contest to see who will be Captain of the Titanic, the government of India scrapped their two largest-denomination notes, 500 and 1,000 rupee, effective almost immediately.

It would be like the US government saying “At midnight tonight the $50 and $100 bills are no longer valid.”

Why? Well the official reason from the Indian government is to combat money laundering or some such nonsense.

But they’ve also admitted that they’re trying to move towards a “cashless society”.

So if your guy won, enjoy. If your guy/gal lost, don’t panic.

Either way, just keep your eye on the ball.

Trump is our Prez… God help us all.

By Robert A. Vella

In April, this blog explained why Hillary Clinton was the wrong candidate at the worst possible time.  We were correct.  In June, this blog predicted that the presidential electoral map – which has been relatively constant since 1992 – would change in 2016 and that voter turnout would continue to decline (see:  Finding the Shiniest Turd: Why the U.S. Electoral Map will change in 2016).  We were definitely correct on the map, and initial analysis indicates we were also correct on the turnout.  The strategic and tactical blunders committed by the Democratic Party establishment – which enabled a megalomaniac like Donald Trump to win the presidency – are not only inexcusable, but are an affront to the very principles upon which their party was built.  In becoming the political party of corporatism, globalism, and technocracy, initiated by Bill Clinton, Democrats inevitably…

“This is the most momentous Election Day in history for the movement to end marijuana prohibition.”

Voters in eight out of nine states that went to the polls on the issue of marijuana reform voted to roll back longstanding restrictions on the drug.

Election night brought several astonishing, wholly unforeseen results. But let’s put the presidential campaign aside for a second and talk about weed.

Marijuana was on the ballot in nine states on Tuesday. Voters in eight of those states went to the polls and approved measures to roll back longstanding restrictions on the drug, delivering a historic victory for marijuana police reformers.

By the end of the night, four states approved recreational marijuana, with California, Nevada, Massachusetts and Maine all rejecting prohibition and opting to tax and regulate the drug instead. The efforts doubled the number of states with legal weed, bringing the total to eight, which are home to nearly a quarter of the nation’s population. Florida, Arkansas, North Dakota and Montana also voted to legalize marijuana for medical use, bringing the total to 29 states and Washington D.C.

Only Arizona, which was considering recreational marijuana legalization, voted down their measure on Tuesday.

The results, as well as the scale of the successes ― which saw measures like Florida’s passed by huge double-digit margins ― will give a shot in the arm to the campaign for legalization and reform, said marijuana policy experts.

“This is the most momentous Election Day in history for the movement to end marijuana prohibition,” said Rob Kampia, executive director of Marijuana Policy Project. “These votes send a clear message to federal officials that it’s time to stop arresting and incarcerating marijuana users. Congress must take action to ease the tension between state and federal marijuana laws.”

The trend of state-level legalization reflects a broader cultural shift toward acceptance of marijuana, the most commonly used illicit substance in the United States. National support for the legalization of marijuana has risen dramatically in recent years, reaching historic highs in multiple polls just last month. States like Colorado have established regulated marijuana marketplaces, and successes there have debunked some lawmakers and law enforcers’ predictions that such polices would result in disaster.

The progress we’ve made … will be very much at risk when Donald Trump enters the White House.

Still, the federal government continues to ban cannabis, classifying it in Schedule I as one of the “most dangerous” drugs, alongside heroin and LSD. States have been able to forge ahead on legalization despite the federal ban, helped in part by federal guidance that urged prosecutors to refrain from targeting marijuana operations that are legal under state law.

President Barack Obama has suggested the government may soon need to reassess its position. In an interview with “Real Time” host Bill Maher on his show that aired last week, Obama said successes in the legalization movement should lead to “a more serious conversation about how we are treating marijuana and our drug laws generally.”

“If, in fact, [marijuana legalization] passed in all these states [on Tuesday], you now have about a fifth of the country that’s operating under one set of laws, and four-fifths in another,” Obama said. “The Justice Department, DEA, FBI ― for them to try to straddle and figure out how they’re supposed to enforce laws in some places and not in others — they’re gonna guard against transporting these drugs across state lines, but you’ve got the entire Pacific corridor where this is legal — that is not gonna be tenable.”

But soon, federal marijuana policy will be in President-elect Donald Trump’s court. Trump has said he would respect states’ rights on the issue, but his potential incoming administration has some marijuana reformers worried.

“The progress we’ve made, and the values that underlie our struggle ― freedom, compassion, reason and justice ― will be very much at risk when Donald Trump enters the White House,” he said.

Giuliani has called legalizing marijuana in any form a “mistake.” And Christie said if he were president, he would “crackdown” on legalization and “enforce the federal laws.” Both men have been rumored to be in line for cabinet positions in the Trump Administration, perhaps Attorney General.

“Trump has clearly and repeatedly pledged to respect state marijuana laws, and we fully expect him to follow through on those promises, not only because it is the right thing to do but also because these reforms are broadly supported by a growing majority of voters,” Angell said. “Reversing course and going against the tide of history would present huge political problems that the new administration does not need.”

I found this on my laptop the other day – being the geek I am sharing seemed the thing to do as I think it’s pretty cool!

No ownership claimed on image – found on Google

Reports of voter intimidation, voting machine problems and Trump-supporting poll observers being harassed and kicked out of venues are starting to come in from Philadelphia.

Poll observer Mike Roman has been tweeting about harassment of Trump supporters all day.

Pompano Beach: #Trump pollwatchers being thrown out of polling place by election worker.

#Brooklyn: #Trump voters being harassed at the polls in Corum.

Philly: Several #Trump pollwatchers have had certificates physically grabbed from them.

Republican pollworkers Philly are being blocked from entering polling locations. These are poll workers – NOT observers.

He also tweeted about how voting machines were “not registering votes for Trump”.

Philly: Votes on machine before the polls opened. #Trump watcher ejected for objecting to using the machine.

CBS News reports that Trump voters in Pennsylvania are seeing their votes switched to Hillary Clinton.

“I went back, pressed Trump again. Three times I did this, so then I called one of the women that were working the polls over. And she said you must be doing it wrong. She did it three times and it defaulted to Hillary every time,” Bobbie Lee Hawranko said.

James O’Keefe posted a video of voters in Philadelphia being bussed to polling stations.

In Philadelphia tailing a pastor’s bus that’s bussing people to the polls. #VeritasIsEverywhere & we will catch your #VoterFraud. @PhillyGOP pic.twitter.com/FY9UPOQolp

A poll worker in Brooklyn was also pictured wearing a ‘Black Lives Matter’ sweatshirt, violating rules on impartiality. According to eyewitnesses, he also attempted to intimidate Trump supporters.