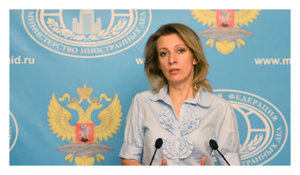 Maria Zakharova, the Russian Foreign Ministry spokeswoman who has made caustic rhetoric and sarcastic social-media posts a staple of her public outreach, has an idea whom U.S. President-elect Donald Trump can thank for his stunning victory over Democratic rival Hillary Clinton: “the Jews.”

In an appearance that has triggered accusations of anti-Semitism, Zakharova suggested on a nationally televised talk show over the weekend that money from Jewish people played a key role in Trump’s win.

Conversations she had with American Jews in September while in New York for the UN General Assembly made it clear that the billionaire businessman would triumph, she said.

We are fast approaching an era when humanity will be subjugated by a technological tyranny managed by an untouchable organization of elites, bureaucrats and paid public minders hired to monitor our behaviors, emotions and thoughts. In an environment like this, law and justice will be meaningless, as the tools of a technocracy can used to enforce the policies and whims of whoever monitors us, whether it be corporate employees, criminals, or abusive state actors.

Recent developments and roll-outs of advanced facial recognition technology are a hint of the coming ubiquitousness in using biometric, face-scanning, emotion-reading, all-seeing technology to govern every detail of daily life. Consider the following developments:

It was recently reported that around half of Americans are already in police facial recognition databases, the vast majority having never been even accused of committing a…

“Our goal is to effectively neutralize any military threats to Russia’s security, including those of the [NATO] strategic anti-ballistic missile defense system, the prompt global strike concept and information warfare,” Putin told the Russian military.

“We will continue to do everything needed to preserve the strategic balance of power,” he said, adding that the balance was what had prevented a major military conflict between the opposing camps during the Cold War.

Putin was speaking to Russian generals and defense…