Harvard University law professor Larry Lessig, who has been providing free legal counsel to “faithless electors” from the GOP considering voting against Trump, claims that 20 GOP Electoral College voters have contacted him and are seriously considering flipping their vote.  Of course, with 306 Electoral College votes assigned to Trump, it would only take 37 faithless GOP electors to block his presidency and push the election to Congress to decide.  Per Politico:

Lessig’s anti-Trump group, “Electors Trust,” has been offering pro bono legal counsel to Republican presidential electors considering ditching Trump and has been acting as a clearinghouse for electors to privately communicate their intentions.

“Obviously, whether an elector ultimately votes his or her conscience will depend in part upon whether there are enough doing the same. We now believe there are more than half the number needed to change the result seriously considering making that vote,” Lessig said.

Meanwhile, the list of Democrat electors demanding an intelligence briefing on Russian interference in the election prior to casting their vote continues to grow.  As of last night we noted that 40 democrats had signed the petition and, as of this morning, the list has grown to 55.  Not surprisingly, the list is loaded with disaffected Hillary supporters from Democratic strongholds like California and Virginia.

Of course, as we concluded yesterday, this effort to block Trump will almost certainly be a complete failure.  That said, the point isn’t really to block Trump, but rather to do as much as possible to undermine the legitimacy of his presidency as possible before he takes office.

For those who missed it, below is our full update from last night:

Update: Forty members (up from 29 earlier) of the Electoral College on Tuesday signed a letter demanding an intelligence briefing on Russian interference in the election ahead of their Dec. 19 vote.

As The Hill reports, ten electors originally signed the letter when it was published Monday, and 30 more have since added their names.

“We further require a briefing on all investigative findings, as these matters directly impact the core factors in our deliberations of whether Mr. Trump is fit to serve as President of the United States,” the letter read.

The Clinton campaign applauded the effort Monday, saying it had repeatedly warned about Russian interference aimed at swaying the election in Trump’s favor.

However, while 40 electors would be enough to turn the election in Hillary Clinton’s favor, the so-called “Hamilton Electors” are almost uniformly Democratic voters anyway and so with Ashley-Madison fan Chris Suprun the only Trump turncoat, for now the ‘soft coup’ remains a long shot.

“I am not looking to be satisfied with just the vote on Dec. 19 or 20, but on January of 2030, when Mr. Trump has either served no time, one term or two terms,” Suprun told The Hill. “History is going to judge my actions on whether he turned out to be Ronald Reagan, Herbert Hoover or Richard Nixon.”

But, as The Hill adds, Republican electors are coming under intense pressure to change their votes:

Bob Muller, a GOP county chairman in North Carolina and a Trump elector, said he’s gotten correspondence from “everywhere from Maine to California” asking him to vote differently.

“I just ignore them,” Muller said.

So far, only a few Electoral College voters have publicly declared that they will not back the candidates that their states supported — including just one of the 37 Trump voters that the self-styled Hamilton Electors, a group of mostly Democrats, need to make any noise on Monday.

And even if the rogue electors achieve their aims, they would only succeed in sending the election to a Republican-majority House, which would almost certainly certify Trump’s victory.

Virtually all Republican electors reached by The Hill said they will vote enthusiastically for Trump.

“I’m voting how the people of Florida have told me to vote,” said Brian Ballard, a Florida elector who raised money for Jeb Bush and Marco Rubio during the GOP primary. “I don’t know anyone who isn’t. I appreciate people using First Amendment rights to reach out and try to convince me otherwise, but I’m obligated to support Trump because he won Florida.

“Also, I love the guy and want him to be president.”

Faithless electors are rare but not unheard of in American history.

At this point, the effort appears to be more about undermining Trump, complicating his ability to govern and following personal convictions — and less about actually winning the Electoral College for another candidate.

As we detailed earlier, Donald Trump could have the election legally stolen from him on either December 19th when the Electoral College casts their votes or on January 6th when a joint session of Congress gathers to count those votes. As The Economic Collapse blog’s Michael Snyder notes, the establishment is in full-blown panic mode at this point, and they seem to have settled on “Russian interference in the election” as the angle that they will use to unleash this ‘soft coup’ as today, the Hill reports more Democratic electors are joining the call for an intelligence briefing before they cast their votes for president on Monday.

On Monday, 10 electors — spearheaded by Christine Pelosi, the daughter of House Democratic Leader Nancy Pelosi (Calif.) — wrote an open letter to Clapper, demanding more information ahead of next week’s vote.

“We further require a briefing on all investigative findings, as these matters directly impact the core factors in our deliberations of whether Mr. Trump is fit to serve as President of the United States.”

Twenty-eight Democrats and one Republican have now signed the letter.

On Monday, the Clinton campaign voiced support for the effort.

“Each day that month, our campaign decried the interference of Russia in our campaign and its evident goal of hurting our campaign to aid Donald Trump,” said John Podesta, Hillary Clinton’s campaign chairman, in a statement.

“Despite our protestations, this matter did not receive the attention it deserved by the media in the campaign. We now know that the CIA has determined Russia’s interference in our elections was for the purpose of electing Donald Trump. This should distress every American.”

But ultimately, as The Economic Collapse blog’s Michael Snyder warns, this is not about Russian interference in our election.

Rather, this is all about the elite doing whatever is necessary to stop Donald Trump.  The elite are going to fight against him every step of the way, and they are never, ever going to give up.  This is a point that I made during an interview with Alex Jones on Monday…

The next key date that we need to be watching for is December 19th.

On Monday, members of the Electoral College will gather in Washington D.C. and in all 50 state capitols to cast their votes.  We know that at least one Republican elector that is supposed to be pledged to Trump will not be voting for him, and that elector claims that there are others that also will not be voting for Trump.

If 37 Republican electors can be persuaded to cast their votes for someone other than Trump, that would throw the election into the House of Representatives, and it is unclear what the House would do in that scenario.

If Trump is not stopped at the Electoral College, there is also the possibility that he could be derailed when a joint session of Congress gathers to count the Electoral votes on January 6th.

In both the Senate and the House, there are anti-Trump Republicans that would absolutely cherish the opportunity to deny him the presidency.

I don’t know if it will happen, but this Russian interference issue is the kind of thing that could be used to justify taking this kind of action.

Of course if the election was stolen from Donald Trump that would likely throw the entire nation into a state of chaos, but I think that at this point the elite would be willing to risk just about anything to keep Donald Trump out of the White House.

Source: Operation Mockingbird Legalized By The US Government 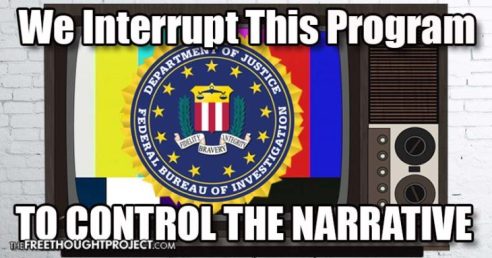 The federal government just signed off on allowing the FBI to impersonate the media, legalizing what was once only the realm of conspiracy theory.

Last Thursday, the Department of Justice Office of Inspector General published what’s become the subject of outrage for journalists, civil and constitutional rights advocates, and legal experts  — “A Review of the FBI’s Impersonation of a Journalist in a Criminal Investigation.”

Allowing agents to infiltrate media organizations for any reason threatens to utterly undermine public trust, kill the very concept of journalistic integrity, and throttle the flow of…

In this video Luke Rudkowski breaks down the latest news of the CIA’s claim of Russian hackers electing president Donald Trump. There is a lot of disinformation in the mainstream with this story only perptrated by real FAKE NEWS the Washington Post and Jeff Bezos.