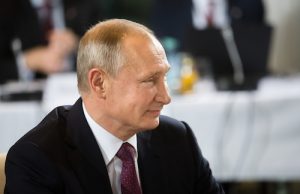 If it’s not Islamophobia, it’s Russophobia. Tired of Western propaganda? Get Vladimir Putin’s perspective with words straight from the horse’s mouth.

Vladimir Putin in particular, and Russia in general,

have been the focus of an intensive high-drama propaganda campaign of late. Are you buying it? For the time being, Russophobia has replaced Islamophobia as the driving force behind the lies. Various US officials have been frantically warning Americans that the Russians are behind everything: hacking the DNC, controlling Trump, influencing the election and breaking the Syrian ceasefire agreement. They might as well add making your girlfriend break up with you, making your toast get burnt and making your car run out of fuel for all the evidence they have presented. Many of these totally unfounded allegations stem from (naturally) the Clinton campaign, home to career criminals Bill

Ever since Hillary Clinton lost the 2016 US presidential election, we have seen some very interesting things happen. From sheer panic to claims of Russian hacks to blaming ‘fake news,’ everything under the sun has been pulled out to blame someone or something for why she lost.

The two apparent reasons that have seemed to raise to the surface the most, and the mainstream seems to be running with, are the idea that Russia hacked the DNC and caused the problem and that the spread of fake news got people so disinterested in Hillary that they voted for Trump.

We covered this years election cycle a lot and have discussed the DNC hack, Hillary’s campaign intentionally knocking out Sanders and more. Check it out here.

The Washington Post published yet another fake news item, this time claiming Vermont’s electrical grid had been hacked by the Russians, but there might be a good reason for its Red Scare hysteria.

Anti-Russia and disinformation hysteria has reached new heights, and — after the Obama administration announced the expulsion of 35 Russian diplomats from the U.S., among other retributions for an ostensively hacked election — the Washington Post continued its foray into Fake News with an article suggesting Kremlin actors hacked the electrical grid in Vermont.

Perhaps because the outlet got away with citing unnamed officials twice before during this reinvigorated Red Scare, the Post again blared its Russia Did It alarm with an article titled, “Russian operation hacked a Vermont utility, showing risk…