“I cannot help but see an engineered narrative of planned dissent against President Trump on account he did not bow to the Establishment and played the neocons’ game.

So yes absolutely, most of his policies are crass and unsophisticated, but they pale in comparison to the horrors previous administrations have fronted. I would say that Mr. Trump’ real crime has been his delivery. Obama was much better at packaging mass murder than Mr. Trump has been at fronting unapologetic ethnocentrism infused with corporate supremacism.”

Now what is wrong with this offer USA?  The offer is really meant for the US. Methinks this is Trump’s first real test on the world stage. What he will do with that offer will determine his foreign policy for the next four years. 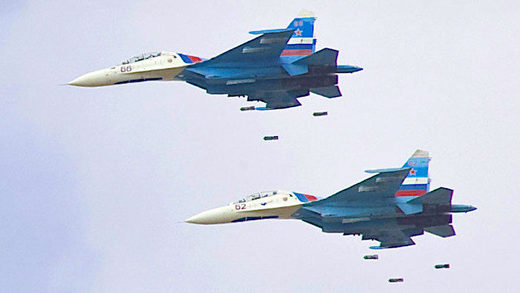 One of the major challenges facing Syria — assuming that the ceasefire holds, and some kind of political settlement can be reached, which is quite an assumption — is the fact that it shares an enormous, porous border with a country that has its own very serious problem with gun-totting weirdos zooming around in Toyotas. We are of course speaking of Iraq.

No long-term peace in Syria is possible without some…

I would love to hear about your views on Putin and Trump reshaping the world, sans globalist, in your upcoming webinar!!! Who is going to fill the globalist void/ power vacuum, will Trump really follow Kissinger’s advice? Can’t wait!!

Every year, Vladimir Putin takes the time to personally acknowledge individuals who excel in various categories of society; the arts and sciences. The entire ceremony is over an hour long, with each laureate addressing the assembly hall. This segment includes only a few speakers of many; it showcases the general public perception of Vladimir Putin as President – much to the detriment of Western mainstream media. (Translation by Inessa S.)

This is the full annual ward ceremony in Russian

A new joke about Putin:

The Kiev Junta is having a heart attack. Russia has finally decided who is going to represent Russia at the Eurovision 2018 in Kiev: it will be Putin, with Shoigu directing the chorus.

And this is the footage from which the above joke has originated. It is of Putin’s informal meeting with the students of MGU (Moscow State University) for the Tatianin Den.’ The Tatianin Den’ is

The flu shot is the greatest scam in medical history, created by Big Pharma to make money off vulnerable people and make them sick, warns President Donald Trump.

In an interview with Opie and Anthony on Sirius XM, Trump slammed flu shots as “totally ineffective” and declared that he has never had one.

“I’ve never had one. And thus far I’ve never had the flu. I don’t like the idea of injecting bad stuff into your body. And that’s basically what they do. And this one (latest flu vaccine) has not been very effective to start off with.

“I have friends that religiously get the flu shot and then they get the flu. You know, that helps my thinking. I’ve seen a lot of reports that the last flu shot is virtually totally ineffective.“

Trump is right – flu shots are the greatest medical fraud in history. They are full of “bad stuff” including formaldehyde and mercury – two powerful neurotoxins – and the vaccine industry even admits that laboratory tests prove the popular jab does not work

Why is a toxic, medical hoax, backed by nothing but voodoo faith-based dogma and clever marketing, pushed on the whole population every year?

Vaccines are the one medicine where no scientific evidence of safety or efficacy is required by anyone: not the FDA, not the CDC and not the media. Congress even passed a law protecting the vaccine industry with absolute legal immunity, even when they manufacture and sell defective products that injure and kill people.

And vaccine manufacturers have been lying to us for years about toxic levels of mercury in flu shots.

Everybody knows mercury is toxic to inject into the human body. That’s not debated except by irrational anti-science denialists.

So why won’t manufacturers remove the mercury? And why does Big Pharma continue to push a product that the vaccine industry admits does not even work?

Couldn’t agree more Shelby, your logic is ironclad and heart in the right place. Besides, where else do hipsters and libtards have their precious latte, mocha cappuccino, espresso macchiato to start their day so the snowflakes can properly protest! XD

Starbucks CEO, Howard Schultz, in opposition to Donald Trump’s recent executive action regarding banning immigrants from certain countries for a few months, has decided to hire 10,000 refugees at Starbucks locations all across the globe. So according to this article, Trump’s supporters took to social media to ramp up a boycott against Starbucks because of the CEO’s stance even though it has also been stated that Starbucks pledged to hire 10,000 veterans and military spouses by 2018.

People are boycotting Starbucks (SBUX) again, and this time it has nothing to do with its cups.

On Sunday, Starbucks’ CEO Howard Schultz disclosed that the coffee giant would be hiring 10,000 refugees worldwide over the next five years, a direct response to President Donald Trump’s executive order barring immigrants — including refugees — from seven countries from entering the U.S.

Now, let’s take a look at something. The average pay of a barista at…

Out goes George Soros and in come Henry Kissinger! Make friends with Russia while alienating everyone else!
The world is being being turned topsy turvy…

I’m attending a seminar that exposes the real hidden agenda of trump, his plans to remake gov’t in his vision for the next 4 yrs. and how to counter them. Great insider intel:

WILL TRUMP SURVIVE HIS FIRST TERM?

I believe we should all be proactive and diligent of the changes imposed from the new administration. We all have control over our own lives, if that means moving abroad, educating ourselves, or mounting resistance to injustices of this world… we must take action. I would highly recommend attending this insightful insiders’ meeting for planning our collective future.

It seems that our republican President Donald Trump is manically signing executive orders to curry favor with his followers without expending anytime to consider the consequences. For example, his own White House legal staff had advised him that banning green card holders from re-entry into the US would be unconstitutional. Even the current UK leader, Teresa Mays has been publicly critical of this recent move. This fight has been moved to the courts for now.

On 1/30/17, the NY Times reported the following: “Acting Attorney General Sally Q. Yates, a holdover from the Obama administration, ordered the Justice Department on Monday (1/30) not to defend President Trump’s executive order on immigration in court.”

Soon after, the Washington Post announced that President Trump fired Ms. Yates from being the Acting Attorney General.

Editor’s Note: Who knows how this will end, but at least the next four years will be an interesting show…

The memorandum gives Bannon, former executive chair of the rightwing website Breitbart News, a regular seat at some of the most sensitive meetings at the highest levels of government, along with other NSC meetings.

The Director of National Intelligence (DNI) and the chairman of the Joint Chiefs of Staff—who need to be confirmed by the Senate—will now only attend the meetings when discussions pertain to their “responsibilities and expertise,” the memo states.

“This is unusual,” writes John Bellinger at Lawfare Blog. “[T]he NSC function usually does not include participants from the political side of the White House.”

Under former President George W. Bush, for example, Karl Rove did not attend NSC meetings, Bellinger noted. “According to former Chief of Staff Josh Bolten, President Bush did not want to appear, especially to the military, to insert domestic politics into national security decisionmaking.”

Additionally, while Bannon has been granted this privileged access, CIA director Mike Pompeo has not—another break with tradition, Bellinger wrote.

Both Bush and former President Barack Obama gave the DNI and the chairman of the Joint Chiefs of Staff regular seats on their councils.

[….] The Deputies Committee will have at least 14 regularly invited participants and potentially 19 or more. This will be unwieldy.

“You’re putting in someone who is not Senate confirmed and taking out the Joint Chiefs of Staff and the Director of National Intelligence, who need to be Senate confirmed,” Sciutto told CNN‘s Jake Tapper. “It raises questions about whose voices will be most prominent about key national-security decisions in the country.”

Former Secretary of Defense Bob Gates likewise told ABC on Sunday that excluding the DNI and the chairman of the Joint Chiefs of Staff was “a big mistake.”

“Under law, there are only two statutory advisers to the National Security Council—the DNI, and the Chairman of the Joint Chiefs of Staff,” Gates said. “Pushing them out [is] a big mistake. They both bring perspective, judgment, and experience to bear that every president—whether they like it or not—finds useful.”

To reiterate, the Joint Chiefs of Staff have been removed from the National Security Council and replaced with a white nationalist. Worry.

Bannon joined Trump for all of those calls.

The move also affirms Bannon’s rise just after Trump echoed the strategist’s recent comments that the media is “the opposition party.”

All US alphabet agencies are unconstitutional, unlawful, corrupt. Wake up, rise up.

“Marijuana is safe, we know it is safe. It’s our cash cow and we will never give up,” former DEA spokeswoman Belita Nelson told the crowd.

A former “chief propagandist” for the Drug Enforcement Agency (DEA), now turned cannabis advocate, made startling comments at the recent Marijuana for Medical Professionals Conference in Denver, Colorado. There, Belita Nelson described what many of us suspected – the DEA is corrupt to the bone and full of lies.

“Marijuana is safe, we know it is safe. It’s our cash cow and we will never give up,” Nelson said to the audience of doctors and nurses, describing the modus operandi of the DEA.

“Nelson represented the DEA in the international media from 1998 to 2004. She did…