David Stockman joined Yahoo Finance show The Final Round to discuss what’s unfolding in the U.S capitol and what to expect from the markets and the economy going forward. As Yahoo Finance host, Jen Rogers introduced the bestselling author she remarked that the current markets are living in a “fantasy land” and that Stockman believes this environment both in government and in the markets is “complete insanity.”

David Stockman is the former Office of Management and Budget Director under President Ronald Reagan, which is the office specifically responsible for producing the President’s Budget. In this role he was the point person for measuring the quality and efficiency of agency programs and various policies within government. Stockman also served as a two-term Congressman followed by a tenure of Wall Street where he worked at various firms. He is now a bestselling author and has recently released his book Trumped! A Nation on the Brink of Ruin… And How to Bring It Back (learn how to score your FREE copy of this insiders look at what Trump must do in office – CLICK HERE).

To set the tone, the Yahoo Finance host Jen Rogers began by asking Stockman his take on President Trump’s much discussed press conference on Thursday, February 16. Stockman remarked, “Maybe he is shooting to be the Fidel Castro of American politics – the “dear leader” who never stops talking. The problem is, this whole rally is based on talk – opium. I think it is going to be over within days, and certainly by March 15. Because that is when the Federal Reserve is going to raise interest rates, finally. They have been dithering for 96 months at the zero bound. By their Keynesian lights they are at full employment and have no choice.”

“Second, this debt ceiling which has been in suspension for the last year goes back into effect. Suddenly people will realize that there is $200 billion of cash in the U.S Treasury and it is running out very quickly.”

“There will be a crisis this summer and by March 15th it will be evident.”

When Rogers pressed that during the Trump press conference to expect tax reform to be on the way Stockman responded, “There is no tax cut coming. Its phenomenal, it’s massive, it’s a great hope, probably in some alternative world it would be a good thing to do – but he is not going to get it through Congress.”

“They were going to repeal Obamacare the first week. They’re not going to get that done this year – if ever. They’re going to be totally bogged down in these battles that Trump has created over the travel ban and deportations. This whole fight over the intelligence agencies and whether or not people in his campaign were communicating with the Russians.”

“This is the deep state getting even… They’re not distractions, they’re the heart of the problem!”

“We are sitting on $20 trillion of debt and there is $10 trillion more built in under current policy over the next decade. They can only pass a tax bill if it is roughly deemed “revenue neutral.” That means they’ll need big revenue sources to pay for the corporate tax rate cuts – and that says nothing of what he promised yesterday about “cuts for all” and that “every bracket and every taxpayer.” Now that’s four of five trillion dollars. Where is he going to get it? The only way to get it is the border adjustment tax, the VAT, and he was meeting with the retailers who were sitting around the table saying we are here to kill this thing dead because “brick and mortar America” can’t stand a 20% increase in their cost of goods.”

“It is delusional to think they can get a revenue neutral tax bill through the Congress this year. Without reconciliation they are going to have a filibuster and sixty votes. To get reconciliation you need a ten year budget resolution and they can’t pass it.” 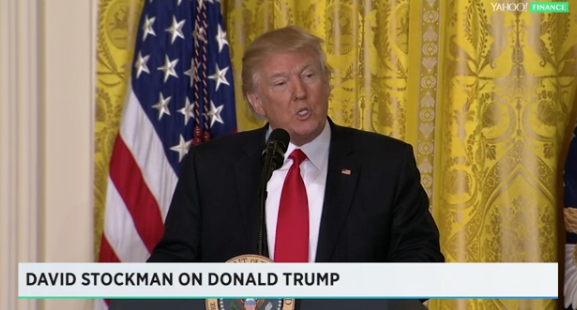 When asked about the comparisons of Reagan’s administration and his economy to Trump and what the secular bull market that is expected to take off means, Stockman shook his head in contrarian style. “This is not the second coming of Ronald Reagan. When Reagan came in, the national debt was only $1 trillion dollars and 30% of GDP. It is now $20 trillion in national debt and 106% of GDP. Even then we had stock market crash, bond market disorder, 18% interest rates for two years. The bull market did not come until 1983-1984 but there was a horrendous downside before. I think we are in the same scenario today.”

“There is going to be a huge correction when the market figures out no Fed, no tax stimulus, their home alone and they’ve got the market trading at twenty six times trailing earnings and an economy that is running out of gas with headwinds coming from all over the world. It is only a matter of days before this whole thing tips over because it is basically the machines raging on headlines.”

When asked what sectors in the economy he liked and felt were secure given the current environment according to his forecasts he said emphatically, “Gold. Because what is going to happen is that central banks around the world are in the process of being discredited. Fiscal policy around the world is out of control. Debt everywhere in the developed world is bogging down governments into dysfunctional crisis.”

“Once the market really figures that out and that there is no stimulus left, there’s nothing more that can be done either fiscally or by the money printers at the central banks – then I think it is game over.”

“It is only a matter of when we reach the inflection point, where it becomes obvious to everybody that this is artificial and there is no more stimulus. This is what they were saying in December and February of 1999, there had been an 8 year rally, it ended in a thundering crash. This is what they said in most of late 2007 and most of 2008, then suddenly – within the matter of 40 days the Russell 2000 dropped by an equivalent of 60%. The way this bubble finance works, along with central bank policy, it takes nearly 7 years on an escalator to work its way up and it takes about 7 weeks on an elevator down.”

Thanks for answering my question Lada! Spasiba XD

TODAY, we are continuing our new series in which we provide FREE Follow Up answers to the most popular questions from the recent Lada Ray Webinar, WILL TRUMP SURVIVE HIS FIRST TERM?

Please read the intro for this series here: IS STEVE BANNON A TROJAN HORSE FOR THE TRUMP WHITE HOUSE? LadaRayWebinar1 Q1

Although our TRUMP WEBINAR Q&A lasted 1.5 hours, we were unable to cover all participant questions. We are offering you a value added new series of FREE Ask Lada videos in which we’ll answer the most interesting and popular webinar questions.

Without further ado, listen to the answer to:

ANNOUNCEMENT: the final results of  FuturisTrendcast Reader Poll: What…