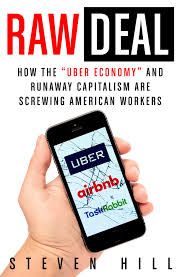 Raw Deal: How the “Uber Economy” and Runaway Capitalism are Screwing American Workers

Raw Deal is about all the creative ways Wall Street and Silicon Valley have invented to exploit American workers since the 2008 meltdown escalated the wholesale destruction of US jobs.  As of 2015 the US economy had shed a total of 12 million jobs, a figure that is increasing rather than decreasing.

The book mainly focuses on so-called sharing platforms, such as Airbnb, Uber, Task Rabbit and their imitators. However author Steven Hill also includes chapters on the phenomenal growth of permatemp “contract” labor, the burgeoning System D or gray labor market (where employers pay cash under the table) and the steady replacement of workers by robots, computers and apps.

The Myth of Worker Independence

For me, the most valuable chapters expose the total fraud being perpetrated on…

The Paschal Greeting, also known as the Easter Acclamation, is an Easter custom among Eastern Orthodox, Oriental Orthodox, and Eastern Catholic Christians. Instead of “hello” or its equivalent, one is to greet another person with “Christ is Risen!” or “The Lord is Risen!”, and the response is “Truly, He is Risen,” “Indeed, He is Risen,” or “He is Risen Indeed” (compare Matthew 27:64, Matthew 28:6–7, Mark 16:6, Luke 24:6, Luke 24:34).[1][2]

In some cultures, such as in Russia and Serbia, it is also customary to exchange a triple kiss of peace on the alternating cheeks after the greeting.

Similar responses are also used in the liturgies of other Christian churches, but not so much as general greetings.