(Natural News) It’s over for America. The “hail Mary” Trump revolution has been suffocated by a hoard of spineless, incompetent corporate prostitutes known as “Congress.”

The $1 trillion spending bill now nearing final approval in Washington D.C. proves beyond any doubt that Washington cannot be fixed by Washington.

It is beyond reform… and beyond the hope of even the most optimistic.

The corruption is so deeply ingrained in the system that even well-meaning individuals like Rand Paul are overrun by the swamp monsters who dominate the establishment. Republican or Democrat, it’s all one big, fat, corrupt party now: THE PARTY OF BIG GOVERNMENT.

“Why do things never seem to change no matter who we send to Washington?  It seems like for decades many of us have been trying to change the direction of this country by engaging in the political process.  But no matter how hard we try, the downward spiral of our nation just continues to accelerate,” writes Michael Snyder at The Economic Collapse Blog. “Just look at this latest spending deal.  Even though the American people gave the Republicans control of the White House, the Senate and the House of Representatives, this deal very closely resembles “an Obama administration-era budget’.”

No matter who we elect, no matter what the intention of the new people going into the system, the swamp suffocates the good intentions out of them, turning even the most well-meaning individuals into war mongers, statists and betrayers of the American people. The Republican party, in particular, has now been exposed as a massive con that falsely promised to cut the size of government… but only as rhetoric, not reality. The same party that sent half a dozen “repeal Obamacare” bills to the White House during the Obama administration now can’t seem to finds its own scrotum for long enough to send the exact same repeal bill to the desk of President Trump.

In other words, the very effort to “repeal and replace Obamacare” under President Obama was a sham. They never really meant it. They only pretended to want to repeal it when they knew the president would never sign it.

We’ve all been conned yet again, which frankly isn’t that surprising. Our election of Donald Trump was primarily an effort to block the coronation of Hillary Clinton, who would have terminated the Republic as we know it today and gutted the Bill of Rights. Most of us strongly suspected Trump was walking into a cesspool of corruption and incompetence, and now we know for sure just how impossible it will ever be to drain the swamp at all.

The only real remaining option for restoring liberty, small government and a representational Republic is now obvious: The dismantling of centralized government and the breaking up of America into regional nation states.

It’s now abundantly clear that centralized big government is broken beyond repair. The system cannot be saved, not even when we elect outsiders who share our desire to fix the system. The swamp is all-consuming, deeply corrupted and swirling with vile actors (like John McCain) who are lifelong statists, steeped in the belief that a large, powerful, corrupt government should appease the powerful corporations and lobbyists while betraying the People.

As long as wretched statists like McCain, Pelosi, Obama, Clinton and others are allowed to remain in power and dictate legislative policy, America will only be suffocated by big government, incompetent agencies (EPA, FDA, CDC, etc.), corrupt lawmakers and the maniacal military industrial complex that seeks endless war as a means of extracting economic power (and patriotic obedience) from the masses.

Trump’s election victory has now accomplished a great service for all Americans by exposing the hopelessness of attempting to change the course of the nation by participating in elections. What Trump’s victory and subsequent swampification has demonstrated beyond all doubt is that it doesn’t matter whom we elect, because the swamp is more powerful than any candidate. Even the most well-meaning individual who dares to enter the swamp becomes subsumed by it, fighting for air while being drowned by the sheer mass of the swamp creatures who inhabit the murky waters.

The way forward for all real Americans is now clear: We must stop wasting our efforts trying to reform the system from within. Instead, the only real course of action with any legitimate hope of a positive outcome is to de-legitimize the swamp itself by decentralizing political power in America. Local governance can be achieved through a variety of means, including state secession, the regional breakup of the nation, or the aggressive assertion of states’ rights (Tenth Amendment).

It cannot, however, be achieved by granting yet more power, more funding and more loyalty to a federal bureaucracy that exists only to serve its own interests while betraying the people it ridiculously claims to represent.

Under Obama, the United States federal government became an enemy of the People and a very real danger to the liberties and economic opportunities of the American people. Those of us who hoped a Trump victory might be able to reverse the insanity and restore real hope for legitimate reforms have now received the unambiguous answer to our questions. NO, the bureaucracy cannot be reformed by electing an outsider. It is now beyond reform, beyond hope and beyond the realm of sanity.

Notably, I do not place the blame for all this at Trump’s feet. No one could have defeated the swamp, it now seems. Jesse Ventura tried to drain the Minnesota swamp a few years back as an outsider, and he too quickly found himself drowning in the muck of the establishment’s swamp monsters. For many years, Ron Paul attempted to slow the growth of the swamp in Congress, but the swamp mocked him and made sure he never achieved sufficient power to pull the plug.

Now, the swamp monsters themselves are so far beyond recognition that they don’t even appear to be of human origin. They have transformed into wretched creatures of the corporate elite, sucking off the teats of corporate power while thrashing violently at the edges of the swamp, ensnaring well-meaning legislators into their sticky tentacles.

To save America, the swamp must be eliminated completely. It cannot be reformed. It cannot be drained. And the swamp monsters cannot be reverted back to human form. The swamp is only interested in expanding the power of the swamp, much like a cancer tumor that seeks to grow larger and larger until it kills its diseased host. The Republic is diseased, and that disease is known as “the swamp.”

While there might have been a time when the swamp could have still been kept in check, that time has long since passed. We are beyond the horizon of swampitude… and we have entered the sci-fi swamptopian era of collapse and despair, from which no sane person can escape unscathed by the darkness of the swamp and its repulsive creatures (i.e. Congress).

Thank you, President Trump, for revealing to us all the true nature of the Beast that now seeks to consume us all. When it comes to the swamp, we are not simply at war with corruption and incompetence, we are at war with the very nature of evil itself which defines and rules over the swamp, infecting anyone who dares enter its realm with the cancer of cowardice and the courage of weasels.

There is no fixing the swamp, no draining the swamp and no reforming the swamp. The swamp must be excised from the body Republic. The nation will not survive much longer without emergency drainage surgery… and even that last ditch desperate act will be desperately resisted by the swamp creatures who can no longer breathe clean air above the surface of the swamp.

Listen to my Health Ranger Report podcast on all this to understand more:

(Natural News) Welcome to the Health Ranger Ranch in Texas! This short video shows you my grazing goats as I discuss wild foods.

Over the last two weeks, I harvested over 25 pounds of wild berries. Why does my ranch have so many wild berries? Because I never spray pesticides or herbicides on anything.

Common weed killer chemicals also kill berry plants, depriving the land of wild foods and poisoning every animals that depends on those foods to survive. By caring for my ranch in a way that avoids all GMOs, synthetic pesticides and toxic chemicals, I can let goats, donkeys and other animals free range on the grasses, shrubs and berries without any risk of them being harmed by chemicals.

Since pursuing this practice, the Health Ranger Ranch has also seen a huge population explosion in wild turkeys, ground squirrels, owls and songbirds. It’s all very simple, really: If you stop poisoning the land, life (and food) becomes incredibly abundant!

See more videos, articles and podcasts about the science of green living at Health Ranger Science. 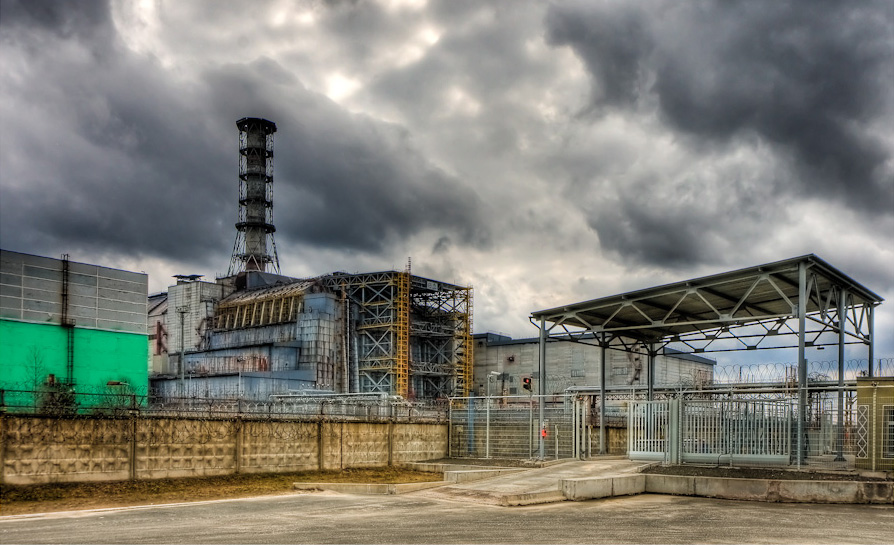 Source: “Wherever it Rains in the United States”: Chernobyl Doused the Whole Hemisphere

Commercial media recollections of the 1986 Chernobyl catastrophe almost always minimize its global impact. A New York Times editorial last Dec. described the April 26 explosions and fires as “a volcano of deadly radioactivity that reached Poland and Scandinavia.” This picture is both factually true and grossly understated — because Chernobyl’s carcinogenic fallout went far beyond northern Europe and all around the world — a fact that is easy to verify.

For example, the UN Scientific Committee on the Effects of Atomic Radiation (UNSCEAR) concluded in 2011 that the disaster “Resulted in radioactive material becoming widely dispersed and deposited … throughout the northern hemisphere.” Then, hammering the lesson home like a drill sergeant, UNSCEAR’s report (“Health effects due to radiation from the Chernobyl accident”)…

The battle of AMI Smart Meters is heating up across the land.  Too many utility customers are getting sick after those meters unknowingly are/were retrofitted on to their home utility meters.  After researching the timeline on what happened either to them or their children’s health, customers realize it all started after AMI Smart Meters were retrofitted on to their electric, natural gas or water utility meters.  The problem is the non-thermal radiation waves AMI Smart Meters emit, which causes electrosmog and an adverse health problem known as electromagnetic hypersensitivity (EHS).

However, I want to share with readers information which may help in dealing with, and/or removing, those harmful meters from your utility service.  Here is the American Policy Center’s 2013 report SPECIAL REPORT Sustainable Development and the Control Of Energy: The growing battle over Smart Meters (a 36-page report) .