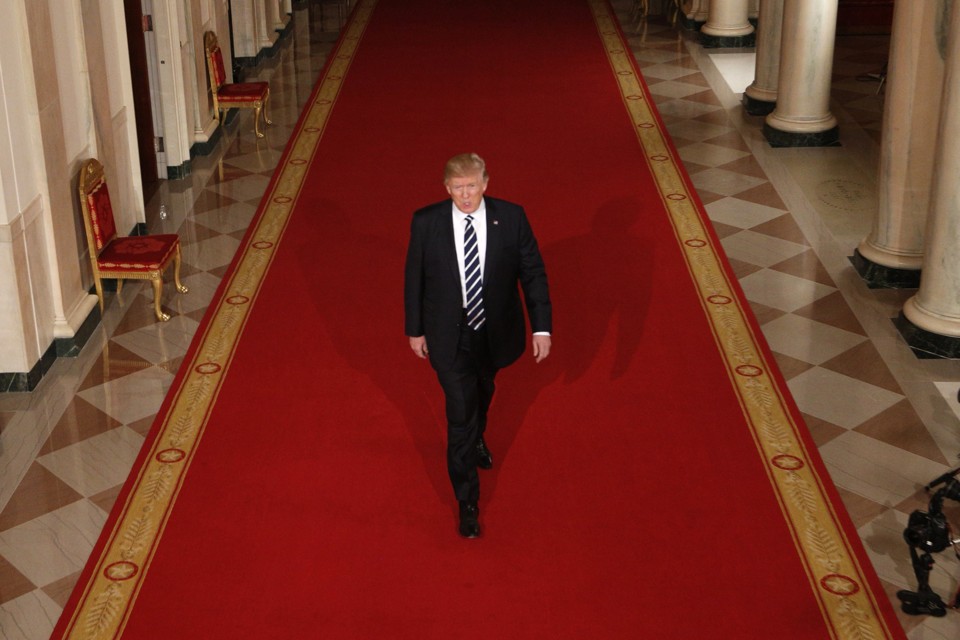 Rather than an inquiry focused narrowly on criminal conduct, the way to resolve questions swirling around President Trump and his associates is to impanel an independent commission.

Careful what you wish for.

In the wake of the firing of FBI Director James Comey, many are demanding a special prosecutor into the Trump-Russia connection. It’s not appreciated enough that such an appointment could well turn into a shield for wrongdoing. A special prosecutor could wrap the investigation of the Trump-Russia matter in secrecy for months and years—and ultimately fail to answer any of the important questions demanding answers.

A special prosecutor, by contrast, seeks crimes. The criminal law is a heavy tool, and for that reason it is thickly encased in protections for accused persons. The most important protection from the point of view of the Trump-Russia matter is the rule of silence. A prosecutor investigating a crime can often discover non-criminal bad actions by the people he is investigating. If those bad actions do not amount to crimes, the prosecutor is supposed to look away.

For a purely hypothetical example: Suppose a prosecutor were investigating a politician for alleged violations of election law. Suppose the prosecutor could not assemble sufficient evidence to justify an indictment—but did discover that the politician had received large financial assistance from organized-crime figures years before, beyond the statute of limitations. A responsible prosecutor would have to keep silent about that discovery. If it’s not a prosecutable crime, it might as well never have happened, from a prosecutor’s point of view.

On the other hand, if a prosecutor does encounter a prosecutable crime, that crime becomes a top-of-mind priority—no matter how secondary or tertiary the crime might seem in the larger scheme of things.

Over the past days, I’ve spoken to eminent lawyers in the fields of election law, national security, and financial crime. The attorneys I spoke with had served at the highest levels of both Democratic and Republican administrations. I asked them all the same question. Let’s hypothesize the darkest facts about Trump campaign collusion with Russian espionage. Imagine that it was the campaign that advised WikiLeaks that the best way to weaponize its (generally unsensational) haul of stolen material was to focus on materials that might sow dissension between Bernie Sanders and Hillary Clinton supporters. Imagine that WikiLeaks—or even Russian intelligence—provided advance notice to the Trump campaign of forthcoming data dumps, so that the Trump campaign could ready its messaging about the stolen information.

In that hypothetical, extreme scenario—one which there isn’t presently public evidence to substantiate—what U.S. laws might have been violated by Donald Trump and the Trump presidential campaign?

The attorneys focused on four areas: The law of digital communications and hacking; federal election law; espionage and classified information; and finally, treason.

It’s emphatically illegal in the United States to hack digital communications or to cause them to be hacked. The Russian hackers who broke into Democratic servers and John Podesta’s email account unquestionably broke laws. If any U.S. person knowingly helped or encouraged the hackers—or directly received stolen data from them—that U.S. person likely committed a crime as well,

But if they received their information at one remove—via WikiLeaks, for example—rather than directly from the hackers, then the law becomes murkier. A lot depends on whether WikiLeaks can stake a credible claim to be regarded as a media organization—and that its leaks should be regarded as protected expression. A lot would depend on whether the U.S. person had some kind of privileged access to the hacked data—or whether the U.S. person only generally provided guidance on timing of the release of that data.

Generally speaking, you have to make some very large assumptions about not only the extent—but also the timing—of hypothetical Trump-Russia collusion to imagine a strong case against anyone in the Trump orbit under U.S. hacking laws. It’s even less plausible that Donald Trump would be personally involved: He doesn’t even use modern communications technology, much less understand it.

It’s illegal for foreign persons to participate in a U.S. election. If any U.S. person knowingly encouraged or aided a foreigner to do so, that U.S. person likely committed a crime. If any agent of the Trump campaign (and election law has built a broad definition of who counts as an agent of the campaign) did so, then the whole campaign would be implicated.

But election law defines “participation” in terms of the expenditure of funds. Pressing a button to forward data from one account to another would almost certainly not count as “participation.” And U.S. election law also carves out an absolute exemption for media organizations—meaning that any prosecution for election-law violations, even more than a hacking prosecution, will turn on whether a court regards WikiLeaks as a media organization or the publishing arm of an espionage organization.

In sum, even if people in the Trump orbit did encourage Russian spies to forward their hacks to WikiLeaks … even if those people advised WikiLeaks on timing and manner of release of the hacked material … even if those people shared their election strategy with WikiLeaks and asked WikiLeaks to rummage through the hack to identify materials that would most effectively aid the Trump cause … even if each of these thus-far-unproven things could be documented beyond a reasonable doubt, a prosecution would remain very difficult.

An imaginary counter-example illustrates the difficulty. Instead of a Russian intelligence agency hacking the Democrats looking for embarrassing material, let’s imagine that a French agency had discovered embarrassing material on Trump’s Russia involvement. Suppose that instead of Russian agents making contact with the Trump campaign, it was the French agents who had reached out to the Clinton campaign. Pretend that the Clinton campaign had said, “You guys need to tell the world about this”—and that the French agency had then leaked its evidence to Le Monde or Le Figaro. Would anybody say that the Clinton campaign had broken any law? Obviously there is an enormous moral and strategic difference between these two hypothetical situations. But election law does not distinguish between nice foreigners and nasty foreigners. It’s not at all certain that the law distinguishes between WikiLeaks and Le Figaro. Any special prosecutor will have to weigh those legal rules against his or her moral outrage.

The Espionage Act of 1917, still the fundamental law governing disclosure of secret information, forbids Americans to disclose information that qualifies as both important to national security and also “closely held by the United States.” While a government employee can be punished for leaking any classified material, no matter how unimportant or out-of-date, a private citizen bears no such duty.

None of the information disclosed by WikiLeaks—however intrusive and hurtful—would remotely qualify as “national defense information” under the 1917 Act. So even if classified information was scooped by the Russian hack of Democratic emails, it’s hard to justify an espionage prosecution.

You may feel that it’s treasonable to collude with Russian agents to pervert a U.S. election. The Constitution of the United States however narrowly defines treason and its proof:

“Treason against the United States, shall consist only in levying war against them, or in adhering to their enemies, giving them aid and comfort. No person shall be convicted of treason unless on the testimony of two witnesses to the same overt act, or on confession in open court.”

Russia, while hostile, is not an “enemy”; the U.S. and Russia are at peace with normal diplomatic relations. Election dirty tricks are acts of subversion, but not acts of war, except in the most extravagantly metaphorical sense. It’s impossible to imagine that a treason charge could be sustained.

At the same time, a special prosecutor is uniquely poorly qualified to answer the single most important question about Trump-Russia: Why did Russia help Donald Trump?

While it remains uncertain whether the Trump campaign colluded with Russia, it’s a fact accepted by everyone except  Trump himself that Russia did intervene on his behalf. Why?

But if Russia preferred Trump because Russian entities have some financial or other hold upon him—that’s something the country would need to know now, even if no crimes were involved.

Special prosecutors, however, move with all the familiar slowness of the law. Their investigations typically take years, not months. Their notes are consigned to the archives. Worst of all, the risk is real that a special prosecutor will chase off in exactly the opposite direction from that most urgently required by the public interest. Remember, prosecutors prosecute—and they will prosecute procedural offenses (lying under oath, disclosure failures, and the like) as readily as substantive crimes. Ken Starr was initially appointed to investigate wrongdoing in the Clinton family’s real-estate investments. He could not prove that—but he could prove that President Clinton had lied under oath about his relationship to Monica Lewinsky.

In a similar way, Patrick Fitzgerald, the special prosecutor in the Valerie Plame case of 2003, quickly discovered that no law had been broken by those who revealed the former CIA agent’s name: former deputy secretary of state Richard Armitage and presidential aide Karl Rove. But he could make a case that a lesser figure in the case—Lewis Libby, the former chief of staff to Vice President Cheney—had made false statements to investigators. Fitzgerald indicted and convicted him, even as the people who had actually put the whole affair into motion walked away without penalty.

It’s easy to imagine a Trump-Russia special prosecutor also being distracted off the main path and into the thickets. It’s imaginable, for example, that former Trump campaign manager Paul Manafort did not fully and accurately disclose his foreign lobbying work. Or that persons in the Trump orbit have not paid all their taxes. Those omissions would plunge those individuals into legal jeopardy—but discovering and punishing them, if they occurred, would not do much to protect the public from Russian efforts to corrupt American democracy.

Few now disagree that the integrity of the 2016 election was polluted by clandestine foreign intervention. Americans deserve the full story of that pollution, If the president of the United States—or anyone near him—is compromised by connections to foreign intelligence or foreign organized crime, the public and Congress need to know that immediately. But the dangers—and the remedies—in the present situation are much more likely to be political than legal. It’s more important that the investigation be speedy and its full conclusions shared with the public than that it lead to indictments, prosecutions, and penalties. By delaying, distracting, and asking the wrong questions, a slow-moving and tight-lipped special prosecutor could well serve Trump’s interests better than Trump’s own lawyers to date have done.