Thank god for strong leaders like Duterte! Translation: he needs 30K troops to clean out the REAL terrorists like CIA drug cartel, CIA trained and paid mercenaries, western regime change specialists, all under the guise of “ISIS”.

© Jorge Silva / Reuters
Philippines President Rodrigo Duterte has requested lawmakers to cough up more cash to fund up to 30,000 new soldiers and policemen he deems necessary to tackle the ongoing ISIS-linked insurgency in the country’s south.

“I need money and we have so many expenses to share with everybody including the war here (in Marawi)… I have to fund the military. I have to reorganize the police. I need 20,000 new soldiers. It’s depleted. And the police, I would need about 10 battalions of Special Action Force-trained [personnel],” Duterte said Wednesday, according to Manila Times. 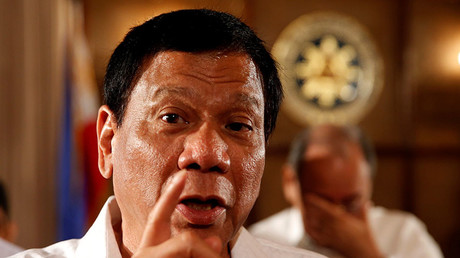 The Philippines leader requested the funds to draft in 20,000 soldiers and 10,000 police during a security briefing in Malacanang Tuesday, as “new security threats” in Mindanao emerged, the publication noted.

“He wanted to relay to us that he needs 20,000 more soldiers for the entire Armed Forces of the Philippines,” said Senate majority leader Vicente Sotto, according to Reuters.

“The security situation will be very serious if we don’t confront it now, nip it in the bud. I think that is the message of the President… what he wanted to relay to us,” Sotto explained, according to the PhilStar.

At least 45 civilians, 114 government soldiers and 471 rebels have reportedly been killed as the battle for Marawi enters its third month.

A new report has revealed that the Islamic State central command in Syria has been steadily funding militants in the Philippines, helping them seize the city of Marawi, arranging funding and carrying…

Manila has extended martial law on the island of Mindanao until the end of the year, as the battle against IS-affiliated fighters intensifies. In July, Duterte already asked Congress to allocate 145 billion pesos ($2,9 billion) for defense spending next year.