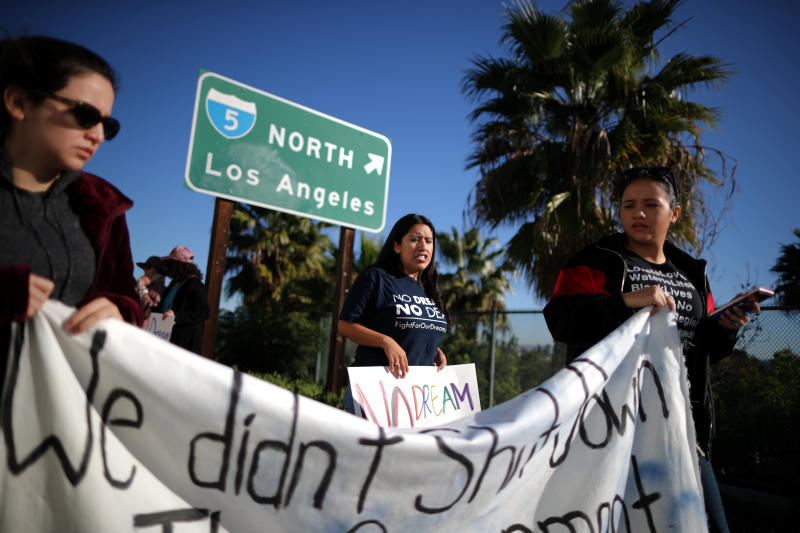 A relatively small group of people is the focal point of a huge, mushrooming brawl in Washington, D.C. On the economic merits alone, there shouldn’t be any fuss at all.

Yet the government may shut down soon because Congress can’t decide what to do about the so-called “dreamers”—roughly 700,000 young people brought to the United States illegally as children, and raised here ever since. President Trump is likely to mention the dreamers in his State of the Union speech Tuesday night, and the ensuing week or two seem sure to feature lots of heated rhetoric about the dreamers, as supporters and critics determine their fate in Washington, D.C., far from the places where most dreamers actually live.

Though born elsewhere, the dreamers essentially grew up in America, learning English, graduating from high school and then going to college or entering the workforce. They now range in age from 16 to 35. Last September, Trump ended a temporary Obama-era program known as Deferred Action for Childhood Arrivals, or DACA, that allowed dreamers to live and work undisturbed in the United States. Trump told Congress to come up with a more permanent plan by early March. If Congress doesn’t, the dreamers could face deportation.

If the dilemma over the dreamers were purely an economic matter, the solution would be obvious: keep them here. About 55% of the dreamers work, while many of the rest are students or stay-at-home caregivers. The dreamers contribute about $42 billion to the economy each year, on net, and generate about $3.4 billion in annual tax revenue for the government, according to the center-right American Action Forum, run by Douglas Holtz-Eakin, former head of the Congressional Budget Office. Those numbers account for costs dreamers impose on the system, such as the use of public schools and other government services, along with benefits they generate, such as revenue derived from sales and income taxes they pay.

There are a lot of misleading numbers in circulation that falsely make the dreamers sounds like a net drag on American society. There are about 11 million undocumented migrants in the United States, and the anti-immigrant Center for Immigration Studies says that overall, they impose a “total lifetime fiscal drain” of $746 billion on U.S. taxpayers. Sounds costly.

But that number doesn’t include any economic contribution, such as taxes paid or demand generated by goods and services such people purchase. Nor does it account for the decline in the size of the labor force that would occur if undocumented migrants were suddenly gone. A smaller labor force generally means lower economic growth.

Besides, dreamers account for less than 7% of the total undocumented population in the United States. And they’re probably more productive than the broader undocumented cohort, since the DACA program requires dreamers to have a high-school degree or equivalent and have a crime-free record.

Still, the problem remains: The dreamers are in the country in violation of U.S. law. The majority of Americans favor an outcome that lets the dreams stay in the United States. But there are legitimate concerns about giving one group of undocumented migrants amnesty, because that could create an incentive for others to migrate to the country illegally, hoping they’ll get a similar deal.

Among many in Congress, there’s an agreement in principle that tightening security along the southwest border would be a fair tradeoff for securing permanent legal status for the dreamers. But hard-liners on either side see it differently. Trump has said he’ll accept the dreamers in exchange for a full $25 billion in funding for the big wall he wants to build along the southwest border. Democrats oppose Trump’s wall and accuse him of holding the dreamers hostage to a white-whale obsession with anti-immigrant symbology. The divide between the extremes may be unbridgeable. That’s how deals die in Washington.

The economy won’t collapse if the United States loses the dreamers. But it won’t prosper, either, if the government turns hostile to productive workers contributing to the economy. Or if politicians put ideological concerns over economic ones.

After seeing how well Russia is doing from Western sanctions, I wouldn’t be surprised if the EU wakes up and start clamoring for the same treatment!
After all, we are your closest partners-in-crime, don’t we deserve better!? LMAO 😀

The new and already infamous “Kremlin sanctions package” was adopted yesterday by the US. We discussed it in this latest post, which is going viral: Major Russian Bank CEO Dire Warning: Anti-Russian Sanctions Mean War, US Should Remove Ambassador from Moscow.

On the preliminary list are CEOs, politicians, large companies, international organizations and Russia’s rich. A big chunk of the list consists of international companies, organizations and countries doing business with Russia’s defense industry. As I told you a few days ago, there is a long line of countries wanting to buy Russian S-400s and modern Russian aircraft despite all the sanctions, while US arms orders are propped up only by American threats and intimidation of its vassals. See these posts:

Why not? China and N Korea already have their own state controlled internet. Russia will have theirs, free from external Western control.
Don’t you just love so-called Democracy! 😉

The latest poll revealed that 58% of Russians are FOR the creation of an alternative internet, exclusively for the BRICS countries. Of course, this spike in approval is due to latest unprecedented sanctions against Russia on all levels and all walks of life. I have shown you what’s going on my latest posts:

To say that such pressure on Russia is futile and ultimately self-defeating for the West and US is to say nothing. The West is creating its own future demise and self-fulfilling prophecy, and we are watching it unfold in slow motion.

Want to know what will ultimately serve as…