(Natural News) YouTube tyranny is in full swing as the dominant video site has turned over video flagging responsibilities to radical left-wing slander groups like the SPLC, famous for flagging just about every Christian and Catholic group across America as some sort of hate group.

“The Southern Poverty Law Center is assisting YouTube in policing content on their platform,” reports The Daily Caller. “The left-wing nonprofit — which has more recently come under fire for labeling legitimate conservative organizations as “hate groups” — is one of the more than 100 nongovernment organizations (NGOs) and government agencies in YouTube’s ‘Trusted Flaggers’ program, a source with knowledge of the arrangement told TheDC.”

Under the control of radicalized left-wing censorship, YouTube has unleashed a censorship rampage over the last week, targeting nearly every prominent conservative, independent media leader and even book authors for termination. (This is what happens when Leftists control things. It’s one more reason to vote against Democrats at every election…)

This censorship rampage is all being done by design, of course, and it only targets those who disagree with “official narratives” on topics of political importance. As part of its purge efforts, just yesterday YouTube issued a strike against my own account for an interview I conducted in 2012 with the author of a book that was banned by Amazon.com.

Today, Natural News has learned that YouTube is hunting down and terminating all users and videos that mention “Jim Fetzer,” the author of that controversial book about the Sandy Hook shooting which claims that the entire thing was staged as a gun control stunt. Several content creators who post videos to YouTube have told me today that all their videos mentioning Jim Fetzer are being deleted, and “strikes” are being issued against their YouTube accounts.

In effect, anyone who dares interview an author who was banned ends up getting banned themselves. It’s like a play book right out of Red China or the former Soviet Union. Now abandoning anything resembling due process or the individual liberty to utter unpopular opinions, tyrannical tech giants like YouTube declare certain individuals to be so “toxic” that anyone who dares speak with them is also banned.

We have now entered the Twilight Zone, and the tyrants in charge are left-wing lunatics who are, without exception, totalitarians who despise dissenting views. As they are demonstrating by the hour, they are more than willing to exploit their positions of power to silence their political opposition and destroy the subscriber audiences of alternative authors or journalists. Make no mistake that this is all a prelude to a massive false flag event that I have described as “The Mother of all False Flags.”

Read more via this article from Breitbart.com:

YouTube is purging right-wing and independent commentators in the wake of the Parkland High shooting while admitting that it is mistakenly banning conservatives.

Independent journalist Mike Cernovich reported earlier today that a video he uploaded of left-wing Antifa activists chanting death threats had been taken down by YouTube. The video shows Antifa shouting violent threats at attendees of Cernovich’s Night for Freedom event in Washington DC, which took place on Saturday. Cernovich commented to Breitbart News on YouTube’s removal, saying, “YouTube is censoring honest, unedited reporting about ANTIFA’s actions. This can mean only one thing — they endorse far left wing violence.”

Although his videos are still available to view, he has been locked out of his Google account, including YouTube, and is unable to upload new videos. Benjamin was also permanently banned from Twitter last year — Facebook is now the only major social media platform that he can use to get his message out.

In a comment to Breitbart News, Benjamin said the ban, which mirrored that of Canadian academic Jordan Peterson last August, was the beginning of a “platform-wide purge.”

“As James Damore’s lawsuit against Google has shown, the entire company is riddled with a far-left ideological orthodoxy that has taken hold to a radical degree,” said Benjamin.

“Google’s active suppression of individualist ideas within its own ranks has caused classical liberal and conservative commentators to be considered as far-right as Nazis, and are being treated with the same kind of prejudice and ruthlessness.”

Earlier this week, we reported on the censorship of Ashton Whitty, a conservative vlogger and Berkeley student. After Whitty uploaded a video criticizing CNN over their coverage of the Parkland shootings, YouTube took down her video and issued her channel with a “strike.” If a channel receives three strikes within three months, it can be permanently banned from the platform. Although the initial video was restored and the strike removed, the same thing happened to another of Whitty’s videos within a few hours.

The YouTube purge has also hit InfoWars, a popular alternative media channel run by radio host Alex Jones, who interviewed Donald Trump while he was still a candidate. InfoWars’ YouTube channel, which has more than 2 million subscribers, has now been blocked for two weeks over accusations that it posted “conspiracy theories” about Parkland. If it receives one more strike within three months, the channel will be permanently banned.

For the last 2 weeks, the legacy media has been openly lobbying for the restriction of the 1st and 2nd Amendments, the very bedrock of what made America the greatest country in the world.

And they wonder why they are hated.

“Google is a monopoly, and its anti-free speech policies are beginning to erode the sanctity of civil discourse,” said Watson. “We need some kind of constitutional amendment or mass movement, such as the one against SOPA, in order to re-assert the supremacy of free expression.”

“YouTube admitting they made a “mistake” in terminating some accounts and content does offer a glimmer of hope that there are some rational actors within the company.”

“However, this speaks to the wider phenomenon of how society has become so coddled and infantilized, that stridently challenging the views of public figures is now being treated as ‘bullying’ and ‘harassment.’”

Watson warned that the “fury” caused by mass censorship on social media platforms would only increase the same “hyper-partisan tensions” that the big tech companies claim to oppose.

A YouTube spokeswoman recently admitted that some videos were being removed in error, attributing it to teething problems caused by their recent hiring of 10,000 new human moderators.

“Newer members may misapply some of our policies resulting in mistaken removals” admitted the spokeswoman. “We’ll reinstate any videos that were removed in error.”

At a Senate hearing last month, Sen. Ted Cruz called out YouTube’s alleged ideological bias, highlighting Prager University’s lawsuit against the company over censorship of conservatives. Cruz told a YouTube representative that if the platform did not remain politically neutral, they could lose legal immunity for user content under Section 230 of the Communications Decency Act. Without this protection, social media companies would be legally liable for all content posted on their platforms – an existential threat to their business model.

Very crucial events happening now in Syria, thanks Lada for the update regarding the East Ghouta crisis! 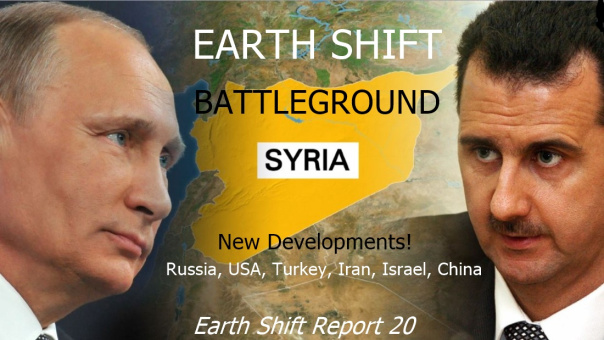 Throughout this extensive report the exclusive intel from Russia, Syria, Turkey and Israel is revealed, complete with Lada Ray exclusive predictions on Syria, the Earth Shift evolution and the future of Russian vs. US influence in the key Mediterranean – Middle East region!

Some of the important points discussed: Why Russia as a peacekeeper and peacemaker is desirable and acceptable to ALL parties in the Middle East, while US isn’t?  Can Syria trigger WWIII? Latest update on E. Ghouta, insider intel and much more!