Here are ten golden rules to live by.  These are serious rules.  They’re not funny or satirical in any way.  They are NOT an example of Poe’s Law.   They MIGHT be sponsored and practiced by the Illuminati, the Deep State, and QAnon.   If you don’t believe all I’ve written here, you’re wrong and need to slam your head into a wall until you WAKE UP AND LEARN TO DEAL WITH REALITY!!!!!  OK, here are the rules.

2.)  If anyone questions your beliefs, they’re wrong.

3.)  If you agree with someone famous, that person is right and can not be wrong.

4.)  Proof of an invisible supernatural world rests in the fact that science doesn’t have EVERY answer to EVERY question and never did.

5.)  Your world view is the RIGHT world view.  Thus, those not holding said view are fair game to… 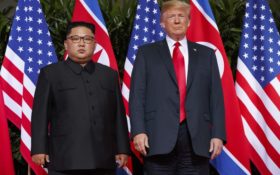 The White House said Thursday that President Donald Trump received a new letter from North Korean leader Kim Jong Un and responded quickly with a letter of his own. The correspondence, following up on their Singapore summit, came amid fresh concerns over Pyongyang’s commitment to denuclearization.

Trump early Thursday tweeted his thanks to the North Korean leader “for your nice letter — I look forward to seeing you soon!”

The White House did not provide details on the specific content of the letter from Kim, received Wednesday, or of Trump’s reply. White House spokeswoman Sarah Huckabee Sanders said the letters addressed their commitment to work toward North Korea’s “complete denuclearization.”

Sanders said no second meeting is “locked in” as a follow-up to the Singapore summit in June, but they remain open to discussions.

Trump in his tweet expressed gratitude to Kim “for keeping your word” on the return of the remains of more than 50 American service members killed during the Korean War. Vice President Mike Pence and U.S. military leaders received the remains in Hawaii during a somber ceremony on Wednesday.

The latest letter from Kim arrived on the heels of concerns over North Korea’s ballistic missile program and commitment to denuclearization. Senior Trump administration officials have urged patience, cautioning that the process of denuclearizing North Korea and removing the threat of its long-range missiles will take time.

Secretary of State Mike Pompeo was headed to an Asian security meeting in Singapore, where a meeting this weekend with North Korea’s foreign minister was possible.

Trump has sought to show progress from his June 12 summit with Kim. He said during a Tuesday rally in Tampa, Florida, that the U.S. was “doing well” with North Korea and noted the return of detained Americans and Pyongyang’s ceasing of nuclear testing and missile tests. “A lot of good things are happening. No tests. No rockets flying. But we’ll see what happens,” Trump said.

The Washington Post on Tuesday reported that U.S. intelligence officials suspect that North Korea is continuing to build new missiles in the same research facility that manufactured the country’s ballistic missiles capable of reaching the United States.

The Post also reported that North Korean officials have talked about how they plan to deceive the U.S. about the size of their arsenal of missiles and nuclear warheads and facilities.

The Associated Press contributed to this article.

This is an excerpt from: ​​

Patreon subscribers get them first! If you purchased ESR23 in exchange for a donation, SURPRISE INSTALLMENTS #4 AND #5 ARE NOW AVAILABLE (go to your report page to read)!

Hmm… No rest for the weary. That Dark State is…

Joel Bowman, writing today from La Condesa, Mexico City…
“I’m going to talk about why bitcoin and the crypto revolution is actually going to be very good for gold…”
Leave it to Doug Casey to ruffle the feathers of both camps.

The art of living fully, totally, and intensely is not something arduous or difficult, but it has been made almost impossible. It is so simple and so obvious that there is no need to learn it.

One is born with an intuitive feeling, intrinsic in life itself. The trees know it, the birds know it, the animals know it. Only man is unfortunate. Man is the highest peak of life, and he wants to know the art of living. There has been a continual conditioning against life. That is the basic cause why the art is needed.