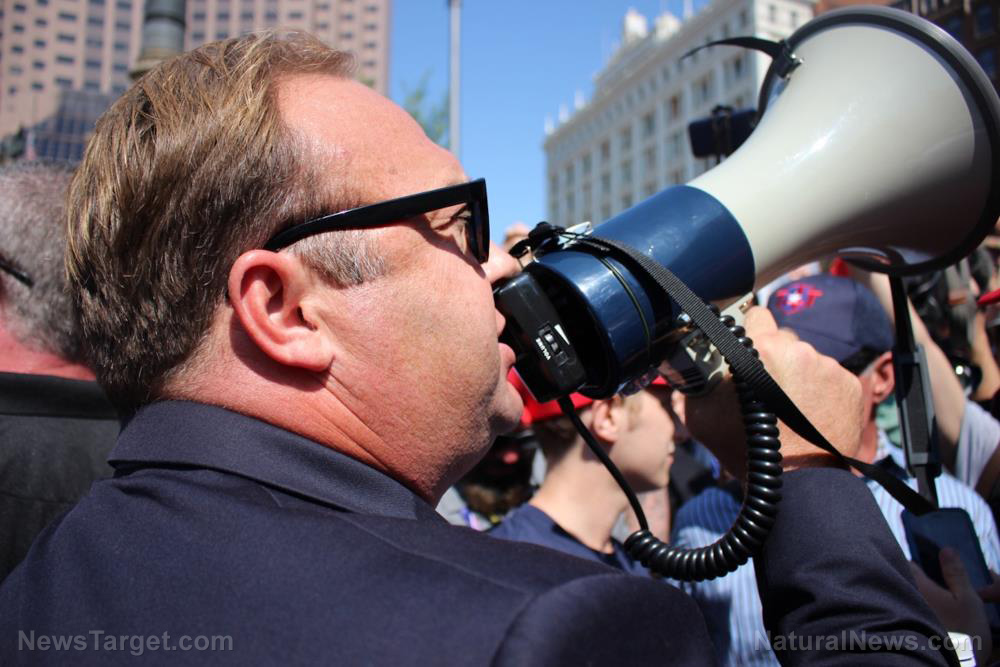 (Natural News) Alex Jones of InfoWars.comunderstands human behavior all too well. He understands history and knows how people abuse positions of power. When Jones began talking about the rise of online censorship, very few took him seriously. Jones was viewed as “paranoid” for understanding that there are people in power who want to seize the opportunity to silence voices in the independent media.

Now that Facebook, Google (YouTube), Spotify, Apple, MailChimp, Shopify and other technocrat organizations have de-platformed, demonetized, shadow banned, and refused their services to Alex Jones, it is apparent that ideological censorship is real. Alex Jones is one of several who have been censored by Silicon Valley’s tech elite.

Technology elite cut off online services of those they oppose, discriminating against people based on the color of their ideas

The evil of online censorship is here: A select few companies think they have the power to dictate the type of speech and the kind of ideas that can be espoused. Where are the apologies for Alex Jones being right all along? Now that this censorship is out in the open, it is not something to negotiate with, not something to reason with using some cowardly no-force-is-necessary approach. Americans must fight back by speaking out ten times stronger than before. Americans must defend their right to speak freely on social media.

Big Tech monopolies like Google, Facebook, and Twitter should be regulated as public utilities, so they can no longer shut down or shadow ban users based on the content and ideas of users’ speech. We are up against a powerful, elite group of people who are gatekeepers of information, information sharing, and monetization on the web. This elite group does not have a right to discriminate against people based on the color of their ideas.

The silencing of voices on social media platforms does not stop with Alex Jones. A global network of digital forensic analysts is working with Facebook to subvert pages that they deem “divisive” or “provoking.” The Digital Forensic Research Lab has been working with Facebook to shut down pages that contain speech that “violates community guidelines.”Facebook recently shut down Telesurenglish, a page accused of “inauthentic behavior surrounding politics in the United States.” From InfoWars to Telesurenglish, no one is free to think.

Speech alone should not be blamed for inciting “division” or provoking emotions. Those emotions and divisions occur within the mind of the receiver of a message; these emotions should not be blamed on the speech itself. Why does Facebook fear that people could be emotionally influenced by speech and why does Facebook use this as a reason to censor that speech from their social media platform? The freedom to speak on controversial topics should remain, no matter how people react in divisive or provocative ways. Facebook cannot protect people from their own reactions to information on the internet. No one should ever want to live in a world where an elite group of technocrats try to protect the public from “offensive” speech or information that makes people think a different way. When Facebook tries to rid their platform of controversial thought, they are only censoring the right of anyone to speak freely on the platform. This controlling, micromanagement of speech, assisted with AI and algorithms, will only force people to speak about certain topics or events in “approved” ways. This speech control is deliberate and planned – a disgusting attempt to make people think a certain way.

All this speech control is a plan to limit the growing independent media, so that Americans are forced to accept the “official story” put out by networks like CNN, WashPo, and the Associated Press. Any other perspective, any deviations of thought, or any new facts are to be buried, silenced, and censored.

Orchestrated un-creation of the fabric of free speech—this is what we’re seeing.

Several of the biggest “conservative/libertarian” figures on the Net—Alex Jones, Dennis Prager, Stefan Molyneux, among others—have recently been banned/censored by Google, Facebook, Twitter, and other social media companies.

When you ask why this is happening, one obvious answer pops up right away:

These social media corporations are fulfilling desperate pleas from major news outlets, who have been losing audience, in massive chunks, to the likes of Jones, Prager, and Molyneaux.

The newspapers and TV news networks came to end of their rope. They had no solutions to their problem—so they went to Google, Facebook, and others, and said, HELP US. Meaning: Censor our competition.

On one level, understanding censorship is that simple.

But then you have to ask yourself this question: Why would Google, Facebook, and other social media giants bend to the needs of mainstream news outlets?

These social media operations are richer and bigger than mainstream news. They could easily have said: “No, we like open forums and a wide variety of opinion, and we think people should be able to deal with ideas they don’t like. We stand for an open society, and we vigorously defend the 1st Amendment.”

But they didn’t say that. Instead, they’re enacting bans and censorship. Why?

The obvious answer staring us in the face is: Google and Facebook and You Tube, for example, the largest social media corporations, are not “free companies.”

The big infusion of cash that sent Mark Zuckerberg and his fledgling college enterprise on their way came from Accel Partners, in 2004.

Jim Breyer, head of Accel, attached a $13 million rocket to Facebook, and nothing has ever been the same.

Earlier that same year, a man named Gilman Louie joined the board of the National Venture Capital Association of America (NVCA). The chairman of NVCA? Jim Breyer. Gilman Louie happened to be the first CEO of the important CIA start-up, In-Q-Tel.

In-Q-Tel was founded in 1999, with the express purpose of funding companies that could develop technology the CIA would use to “gather data.”

That’s not the only connection between Jim Breyer and the CIA’s man, Gilman Louie. In 2004, Louie went to work for BBN Technologies, headed up by Breyer. Dr. Anita Jones also joined BBN at that time. Jones had worked for In-Q-Tel and was an adviser to DARPA, the Pentagon’s technology department that helped develop the Internet.

With these CIA/DARPA connections, it’s no surprise that Jim Breyer’s jackpot investment in Facebook is not part of the popular mythology of Mark Zuckerberg. Better to omit it. Who could fail to realize that Facebook, with its endless stream of personal data, and its tracking capability, is an ideal CIA asset?

“INSURGE INTELLIGENCE (twitter) can now reveal the vast extent to which the US intelligence community is implicated in nurturing the web platforms we know today…The lynchpin of this story is the corporation that in many ways defines the 21st century with its unobtrusive omnipresence: Google.”

“Google styles itself as a friendly, funky, user-friendly tech firm that rose to prominence through a combination of skill, luck, and genuine innovation. This is true. But it is a mere fragment of the story. In reality, Google is a smokescreen behind which lurks the US military-industrial complex.”

“The inside story of Google’s rise, revealed here for the first time, opens a can of worms that goes far beyond Google, unexpectedly shining a light on the existence of a parasitical network driving the evolution of the US national security apparatus, and profiting obscenely from its operation…”

In other words, social media aren’t banning and censoring “conservatives/libertarians” merely as a favor to their kissing cousins who run major news outlets—no, this goes much deeper.

This is the intelligence and Pentagon communities, with their attendant neo-cons and military contractors, defending their version of the “new world.”

Anyone with a large online audience, who has strong opinions which resist and run counter to this new world vision, is considered an obstacle, and a target for censorship.

The intelligence/Pentagon vision? Endless wars; endless waves of migration engendering chaos; multinational corporations free to roam the planet, set up shop in hellholes, produce their goods for relative pennies, sell those goods anywhere with no tariffs, thus undermining local economies and centralizing economic power in fewer hands; the vast expansion of surveillance and censorship (which go hand in hand); widening poverty, which makes more and more people dependent on government…

Social media censorship isn’t merely a bunch of knee-jerk liberals trying to stop ideas they don’t like. It is that, but it’s much, much, much more.

Google and Facebook are nurtured creatures of the national security state.

Here are links to go to, to listen to the Alex Jones show: