(Natural News) Vaccine hysteria is getting worse by the day. Even though flu vaccines contain known neurotoxins, including mercury and potassium chloride, millions of Americans are brainwashed by the television and think getting the toxic jab somehow keeps them safe from viruses. The craziest part is that many people die shortly after getting the flu vaccine. Maybe that’s because not only does the flu shot make the flu worse if you get it, but it can make it lethal, contrary to everything the CDC says.

Fact: More Americans have died from the flu after the flu shot than from Ebola. Others have become blind or paralyzed. The flu shot causes more deaths than any other vaccine, accounting for more payouts from the secretive vaccine court than for any other vaccine injury claims. So what is the risk versus benefit analysis?

First off, the flu shot only works ten percent of the time. Would you board a plane if you knew it only landed without crashing ten percent of the time? Meanwhile, the flu jab literally kills about 50 people every year. And, the CDC exaggerates flu deaths. If you get the flu and then die from pneumonia, viruses, bacteria, respiratory infections, or from a MRSA (superbug) infection at the hospital, the CDC still says you died from the flu. Plus, of the real deaths from the actual flu, how many of those people DID get the flu shot? The CDC refuses to reveal those statistics, and there lies the rub.

You see, that jab makes the vaccine manufacturers billions of dollars, which are then handed over to politicians and regulatory officials during their auspicious “lobbying” functions, legislation promotions, and insider donations.

The flu shot also weakens the human immune system, making the receiver more susceptible to a worse case of the flu should they catch it the following year. Why does it weaken your immunity? The flu vaccine contains genetically modified viruses, DNA proteins from animals, and bacteria that’s bred in a carcinogenic serum. Add in some embalming fluid (formaldehyde) and an unpredictable, untested batch of several strains of attenuated (weakened but still live) flu, and the human body has no clue how to defend itself.

Millions of people are severely allergic to the ingredients in vaccines

Life-threatening allergic reactions to flu shots are not as rare as the CDC would have us all believe. Injecting known allergens is much more dangerous than eating them, breathing them in, or putting them on your skin, because injections bypass all of those important filtration systems, including the digestive tract, the lungs, and the skin.

People who are allergic to eggs, dairy, peanuts (peanut oil traces are still present in many vaccines), latex, monosodium glutamate (MSG), foreign proteins, blood from other animals, formaldehyde, and mercury – can react quite violently to having those allergens injected into their muscle tissue. Some people become pale, start wheezing, break out into hives, notice their heartbeat speed up, and others have difficulty breathing.

Mounting research is systematically proving that the influenza vaccine does not work and conversely causes severe damage to the human body. Different strains of the flu appear throughout the season, so scientists who guess ahead of time have no clue what they’re really doing. Researchers at the University of Ghent in Belgium released their findings from a scientific study that conceded most flu shots are out of date and therefore do not work. Even the CDC, if you read the fine print, admits that the flu shot fails most of the time.

Each year, only about 30,000 people are hospitalized for influenza, yet this past year (2017), the CDC would have us believe that 80,000 people died from the flu. Yeah, right. Talk about fear mongering. Most respiratory illnesses during the “flu season” (which runs from October through May), are caused by other bacteria and viruses, not influenza.

Lastly, despite the CDC swearing up and down they removed mercury from all childhood vaccines way back in 2001, the CDC highly recommends the flu vaccine for all pregnant women and infants as soon as they turn 6 months of age. What’s the problem? The flu shot contains 50,000 times more mercury (listed as thimerosal – a mercury derivative) than the EPA allows in public drinking water. What’s worse is these doctors and nurses are injecting it directly into muscle tissue, causing severe inflammation, auto-immune reactions, and in several cases as science has proven, death.

Learn more about the flu and its vaccine at Influenza.news.

(Natural News) On Sunday, POTUS Donald Trump took to Twitter to express his outrage and frustration regarding the rapidly expanding migrant caravan that Honduran, Guatemalan, and Mexican authorities have thus far allowed safe passage as they steadily approach the United States.

“Full efforts are being made to stop the onslaught of illegal aliens from crossing our Souther [sic] Border. People have to apply for asylum in Mexico first, and if they fail to do that, the U.S. will turn them away. The courts are asking the U.S. to do things that are not doable!” he wrote, The National Sentinel reported.

He then added: “The caravans are a disgrace to the Democrat Party. Change the immigration laws NOW!”

Well, he’s not wrong about who is most to blame for our busted immigration system. Given that, Republicans – well, RINOs – are partly to blame as well.

But regardless of which party is culpable, the fact is we’ve got something like 5,000-10,000 people from Central America and Mexico currently en route to our southwestern border. And despite the president’s threats to cut off aid to those countries, nobody is doing much to stop this mass of humanity which, by any reasonable measure, is a full-on invasion of our country.

Only, the invaders aren’t carrying weapons, they’re carrying crying children and babies who will soon become wards of the U.S. taxpayer if they aren’t stopped short of our border.

The worst option may be the only option

He can rely on diplomacy but so far, our diplomatic efforts to convince our southern neighbors that exporting their poverty is a bad idea isn’t working. After all, if countries can offload their own poor onto U.S. welfare rolls, why not?

The president can order beefed up border security but where will the additional Border Patrol and ICE agents come from? He’d have to pull every available agent off their current interior assignments and redeploy them to the border. But where? We don’t yet know the location that the migrant invaders will attempt to cross, and in fact, the caravan will most likely diverge as it approaches with invaders trying to cross at several points. We don’t have enough border agents for that.

POTUS could order the armed forces to seal the border as he threatened last week. But let’s be reasonable. Images of U.S. troops interdicting ‘poor, helpless migrants’ (and especially migrant children) are not going to play well on the evening news. And while a majority of Americans support the president’s immigration policies, he took a hit politically after the dishonest media portrayed the administration’s former border separation policy as something Trump implemented and not his predecessors (Obama used the policy to good effect).

Also, where are the additional troops going to come from? Blue states refused the president’s earlier request for thousands of National Guard troops to augment Border Patrol officers along the U.S.-Mexico border. He could call up Guard forces for federal duty, but that would cost the Pentagon millions in operational expenses that have not been factored into the current budget.

Politically speaking, though, the specter of thousands of illegal alien invaders approaching the U.S. border unimpeded probably helps the president and the Republican Party more than it helps Democrats. But while that might boost the GOP’s congressional majority, we still don’t have a wall built and our immigration laws are still broken.

In short, POTUS Trump really has no good options. He can’t rely on Mexico, and the governments of the Central American countries of origin are money ahead even if they lose U.S. financial backing because they’re offloading their poor.

Nevertheless, his responsibility is to protect the country. And this is an invasion. So the poorest of options – deploying the military – may wind up being the only option the president has.

Read more about the migrant invasion of the U.S. at InvasionUSA.news.

This is precisely what I have publicly predicted would take place right before the mid-term elections: A coordinated false flag bombing of the left-wing media and left-wing political leaders. It’s blatantly obvious that the globalist democrats are sending these packages to themselves, knowing the media will blame Trump supporters, Alex Jones, conservatives and gun owners.

What you are witnessing is the very definition of a media-run false flag event, where the media itself gets targeted so that the same media can hysterically report that it’s under attack because President Trump is whipping up “hate” against the media.

You can see proof of our predictions below:

The false flag bombings of the media were EASY to predict

These obvious false flag “pipe bomb” events showcase the stunning desperate of the left-wing media and its globalist controllers. It also reveals that they now believe they are going to lose the mid-term elections, otherwise they would not have invoked this desperate measure.

Importantly, the mailing of these “suspicious packages” is just the very beginning of this false flag rollout. If this narrative gets sufficient traction, the same operatives will likely escalate this to active bombings of CNN or social media tech giants.

In fact, in my Health Ranger Report podcasts, I have repeatedly predicted that false flag attacks would specifically target CNN. Here are just a few links to hear it for yourself:

Censorship a prelude to a massive FALSE FLAG event

Plot to ELIMINATE TRUMP about to be triggered 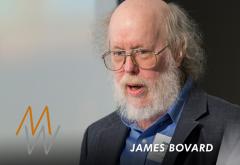 We take a break from economics this week to welcome our old friend Jim Bovard for an unflinching look at the disastrous politicization of everything in America. The nasty fight over Brett Kavanaugh’s Supreme Court confirmation is only the latest example of a trend Rothbard identified decades ago, one that intensifies in the Trump era. Can we ever make politics matter less again? Can we ever stop filtering everything that happens through a noxious lens of race, sex, class, oppression, and intersectionality? And can we ever stop seeking to vanquish people politically?

Jim Bovard on the Terrible Politicization of America

Note: The views expressed on Mises.org are not necessarily those of the Mises Institute.