For Schumer and Democratic leaders, this isn’t just a problem in Texas, where O’Rourke trails his Republican opponent, Sen. Ted Cruz, by nearly 10 points.

This is a nationwide black eye — something Democrats can ill-afford just days before the critical 2018 midterm election.

The undercover video, released Friday by undercover conservative activist James O’Keefe and his Project Veritas organization, begins with Democratic campaign volunteers bragging, “It’s f**king happening!” and “I just hope nobody that’s the wrong person finds out about this!”

What don’t they want getting out?

The illegal funds and supplies the Democratic campaign is secretly funneling to supply the migrant caravan, the footage appears to show.

You can see the shocking footage here — 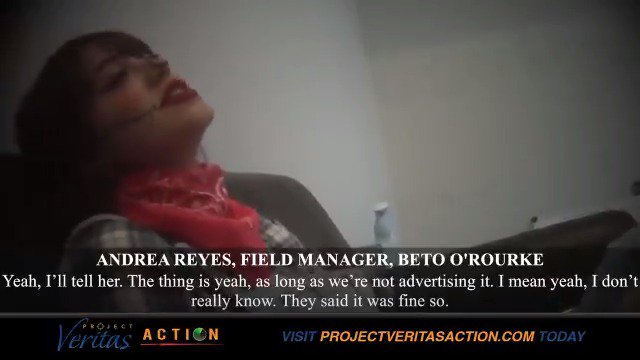 “The material Project Veritas Action Fund captured shows campaign workers covering up the true nature of spending of campaign funds and intentionally misreporting them,” an attorney for Project Veritas wrote in the group’s official announcement.

“This violates the FEC’s rules against personal use and misreporting. It also violates Section 1001, making a false statement to the federal government,” the attorney wrote.

“The FEC violations impose civil penalties, including fines of up to $10,000 or 200 percent of the funds involved. Violations of Section 1001 are criminal and include imprisonment of up to five years,” he concluded.

“We could probably get away with using the [campaign] vans,” one campaign worker says in reference to driving migrants north to the border. “Nobody needs to know.”

Joshua Adam Schulte, a 30-year-old former CIA computer programmer who was indicted over four months ago for masterminding the largest leak of classified information in the agency’s history, has now been issued three new charges.

The news comes just hours after Schulte wrote a letter to the federal judge presiding over his case, accusing officials at Manhattan Metropolitan Correctional Center of interfering with his case pleading and subjecting him to “cruel and unusual punishment” in pre-trial detention.

“The shit-filled showers where you leave dirtier than when you entered; the flooding of the tiers and cages with ice-cold water; the constant blast of cold air as we are exposed to extreme cold without blankets or long-sleeve shirts; the uncontrollable lights that are always on as we are sleep deprived…No human being should ever have to experience this torture,” Schulte wrote.

Schulte, who once designed hacking tools and malware for both the CIA and NSA to break into adversaries computers, was arrested in August 2017 and initially charged with possession and transportation of child pornography.

It wasn’t until June 2018 that US prosecutors had been able to bring a 13-count superseding indictment against him, alleging theft of over 8,000 classified CIA documents and leaking them to WikiLeaks, who then published the classified information last year under the name “Vault 7.”

Now, federal prosecutors have added three new charges against Schulte in a rewritten indictment filed in Manhattan federal court in New York on Wednesday with alleged further attempts to leak information related to his case.

The three new charges against Schulte involved the unlawful transmission and attempted illegal transmission of classified national defense secrets from prison, along with a contempt violation.

According to prosecutors, Schulte had been using one or more smuggled cellphones to communicate covertly with individuals outside the prison.

Prosecutors say after an FBI search into his jail cell found multiple devices, including one encrypted device, with 13 email and social media accounts, the government investigated them which revealed that he had sent classified information to third parties, including via an encrypted email account.

Schulte wrote a handwritten submission to the judge after he was moved to an isolated part of the correctional center on October 1, saying “this entire case is a lie.”

“As you peel back lie after lie, nothing remains but a bare search warrant affidavit without probable cause,” Schulte said.

Schulte has pleaded not guilty to the previous charges related to child pornography and disclosure of the classified information, and has repeatedly denied any of his involvement in the Vault 7 case.

The Vault 7 release was one of the most significant leaks in the CIA’s history, exposing secret cyber weapons and spying techniques that the United States used to monitor or break into computers, mobile phones, televisions, webcams, video streams, and more.

President Donald Trump’s promise to defend the United States border from outside invaders seems to be paying off.

The migrant caravan of thousands of would-be illegal immigrants — some of whom have criminal backgrounds — lost a lot of momentum over the last week after Trump ordered the U.S. military to protect our nation’s southern border.

Now the caravan leaders are admitting defeat, and the group may be splintering into fragments.

Under pressure from the Trump administration, Mexico refused. Instead, it offered thousands of migrants asylum in their country.

Approximately half the caravan migrants accepted the offer to stay in Mexico. Those that remain seem unsure where to go next.

Without bus transportation, they face thousands of miles between their current position and the U.S. Waiting for them there are thousands of U.S. soldiers under order to defend the nation’s border.

The leaders of the caravan seem unsure of what to do next.

According to Fox News, the caravan started moving again Thursday morning towards Santa Maria Jalapa del Marque, but suddenly turned and started heading towards the coast and the city of Veracruz.

“The switch suggests that once the caravan gets to Veracruz, it may split in half, with some of the caravan probably heading to a border crossing about 600 miles away in McAllen, Texas. The other half may travel more than double that length to Tijuana, just across the border from San Diego,” Fox News reported.

Every day, more and more of the would-be illegal migrants are giving up and going back home.

“Of the friends that I have been with, all want to go back,” Hasiel Isamar Hernandez told The Associated Press earlier this week.

Without help from Mexico — and with Trump promising there’s no hope to force their way through America’s border — it’s expected most will simply go back home.