February 26, 2019 “Information Clearing House” -US Vice President Mike Pence delivered a bellicose speech before representatives of 14 Latin American countries at a meeting of the Lima Group in Bogotá, Colombia, yesterday. The remarks were timed to coincide with the US-orchestrated provocations at the Venezuelan border over the weekend, resulting in clashes that left several people dead.

Pence rehashed phrases plagiarized from speeches given by George W. Bush in the run-up to the wars in Afghanistan and Iraq, combining them with denunciations of socialism.

“There is no turning back,” Pence said. “All options are on the table.”

“A new day is coming in Latin America,” he continued. “In Venezuela and across the Western hemisphere, socialism is dying and liberty, prosperity and democracy are being reborn before our eyes.” Pence issued an ultimatum to the Venezuelan military, threatening that if it did not overthrow Maduro, “You will find no safe harbor, no easy exit, no way out. You will lose everything.”

Pence announced that the US would place added sanctions on officials in the Venezuelan government and called on the right-wing governments of Latin America to “transfer ownership of Venezuelan assets in your country” to the government of US puppet Juan Guaidó.

In other words, the US is conducting cross-hemispheric highway robbery.

In his speech, Pence gave several justifications for intensifying US war threats against Venezuela. Venezuela exploits indigenous tribes, damages the environment through oil exploration and impoverishes its population, Pence said.

These claims would be laughable were it not for the seriousness of the threats. The United States is the world’s worst offender in each of these departments.

Particularly disgusting was Pence’s attack on Venezuela for refusing “shelter for those displaced” immigrants along its border.

The Washington Post wrote that Pence “embraced a sobbing elderly man,” an immigrant waiting to enter Venezuela. The Post reporters, tears welling in their eyes, wrote that Pence “told the man in English, ‘We are with you.’”

The Post report made no mention of the thousands of immigrants currently sleeping on the streets in Mexican cities along the US-Mexico border after the US barred them from entering the country to apply for asylum.

Simultaneous with this weekend’s planned confrontation, the US military escalated its war plans. CNN reported that “the US military has flown an increased number of reconnaissance flights in international airspace off the coast of Venezuela during the last several days to gather classified intelligence” in possible preparation for a military intervention.

On Saturday, Puerto Rican Governor Ricardo Rosselló reported that the Venezuelan military threatened to “open fire” on an American ship that entered Venezuelan territorial waters without permission. Though the ship was registered in Vanuatu, it was flying under a US flag in violation of international maritime law. US officials claim the ship was carrying 200 tons of “humanitarian aid.”

The Washington Post wrote yesterday that behind the scenes in Bogotá, Guaidó “sought assurances that the United States could use force if necessary.” Venezuelan right-wing opposition leader Julio Borges tweeted Sunday that the opposition “will urge for an escalation of diplomatic pressure and the use of force against the dictatorship of Nicolás Maduro.”

President Trump has long privately expressed his interest in waging war on Venezuela. In his recently published book, former acting FBI Director Andrew McCabe reports that Trump once brought up Venezuela in his presence, saying, “That’s the country we should be going to war with. They have all that oil and they’re right on our back door.”

The bellicose mood in Washington was exemplified by a reckless Washington Post opinion article published yesterday by Francisco Toro, who leads the think tank “Group of 50,” founded by a former World Bank official with the backing of the imperialist Carnegie Endowment for International Peace.

Despite the article’s title, “With US military action, Venezuela could become the Libya of the Caribbean,” Toro makes the case for pushing the region to the brink of war. Last weekend’s border confrontation “moved military action to dislodge the Venezuelan regime from fringe speculation to serious policy discussion,” Toro writes.

The Venezuelan military, he continues, is “unlikely to rebel against Maduro unless they calculate US military action is genuinely imminent… The best solution now, then, is a strategy designed to convince Venezuela’s generals that, unless they topple Maduro in short order, they’ll be bombed out of existence—a message that should be delivered by people who understand actually bombing them out of existence would be a disaster. What the United States needs to do, in other words, is bluff, by taking further steps that raise Venezuelan generals’ perception of a threat.”

The article concludes: “God help us all.”

This incendiary strategy has the bipartisan support of the US political establishment. As former Bush administration official José Cárdenas wrote in Foreign Policy :

“US policy toward Venezuela has enjoyed a bipartisan consensus in Congress through successive administrations. Democrats such as Sen. Bob Menendez, the ranking member of the Senate Foreign Relations Committee, and Rep. Eliot Engel, the chairman of the House Foreign Affairs Committee, have been active critics of the breakdown in Venezuelan democracy over the years.”

It is not certain, however, that the US will be able to line up its allies behind its threats of military intervention. The increased threats of war have deepened divisions between Washington and its allies in the region and in Europe.

While the Lima Group declaration called for the immediate resignation of Maduro, it also noted that “the transition to democracy should be conducted by the Venezuelans themselves peacefully… by political and diplomatic means, without the use of force.”

Brazil’s vice president, Hamilton Mourão, said Monday from Bogotá that “a military option was never an option” for Brazil, and that “we advocate for no intervention.” The foreign minister of Spain, Josep Borrell, told the Efe news agency on Sunday, “We have clearly warned that we would not support—and would roundly condemn—any foreign military intervention.”

Despite support from the governments of the region and in Europe for the US regime-change operation, these statements reflect concerns that the US is proceeding with a degree of recklessness that risks throwing the entire hemisphere into an unprecedented level of chaos.

The Trump administration has called for an emergency meeting of the UN Security Council, now scheduled for Tuesday. The US will likely use the opportunity to denounce Russia and China, which are likely to exercise their veto power as permanent members to block a pseudo-legal international fig leaf to US imperialism’s machinations in South America.

This article was originally published by “WSWS” – 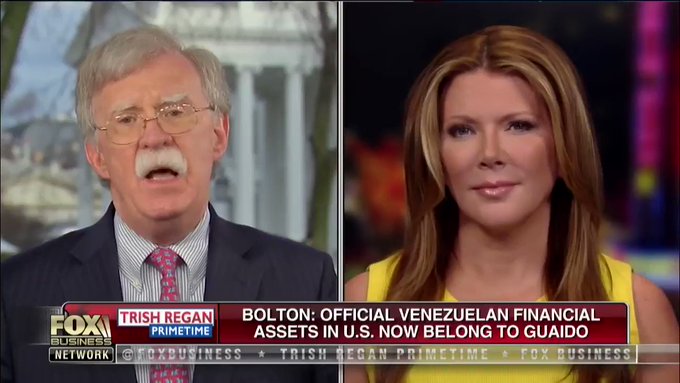 “We’re in conversation with major American companies now…It would make a difference if we could have American companies produce the oil in Venezuela. It would be good for Venezuela and the people of the United States.” – John “Chickenhawk” Bolton, servant of Swamp King Trump.

The Coup Has Failed & Now the U.S. Is Looking to Wage War: Venezuelan Foreign Minister Speaks Out

US Moving Special Forces and Equipment to the Venezuelan Border

Watch: Guiado Flees to Colombia; Supports Government Coup, Starts Tour of US to Drum Up Support!

Here is the latest Lima Group Statement: The number of countries presented were less that the 13 members of the group.

Madeline Albright: Is The Price Worth It?

The views expressed in this article are solely those of the author and do not necessarily reflect the opinions of Information Clearing House.