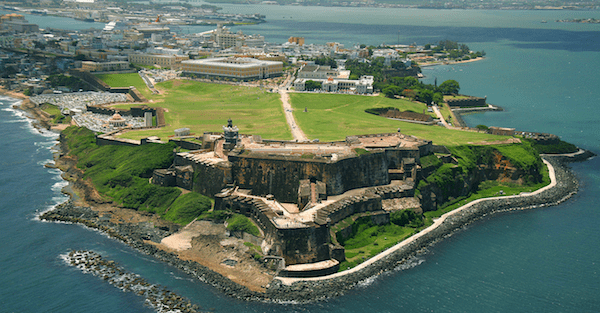 Here I am, living in a beautiful place that’s part of the United States… yet I pay ZERO US federal income tax, only a 4% corporate tax for my businesses and ZERO capital gains and dividends tax.

And this is all perfectly legal.

I’m still a US citizen, but I’m not hiding out from the IRS, nefariously dodging Uncle Sam’s taxes. What I’m doing is 100% in line with tax codes and regulations. I’m simply using the existing rules to live a comfortable lifestyle in paradise.

You too can have this type of lifestyle and tax advantages… and we’ve just posted an in-depth article on how to take advantage of Puerto Rico’s tax incentives to our website.

Business owners, self-employed professionals, independent contractors, traders, consultants and investors: this is your rare opportunity to legally escape US taxes.

This opportunity is especially interesting for Americans, because the US is one of only two countries in the world that taxes its citizens on their worldwide income even if they aren’t residents. And Puerto Rico is one of the few legitimate ways around that.

But even non-US citizens could benefit from Puerto Rico’s incentives.

In this article I also share why right now is literally best time EVER to apply for Puerto Rico’s tax incentives. I know that might sound like a bunch of hype, but there are two very rational reasons why this is the case.

So if any of the above apply to you even just remotely, you owe it to yourself to check out Puerto Rico’s incentives right away.

Click here to read our in-depth article on Puerto Rico.

Putin for President…. in Ukraine, LOL!

It was documented that in the 1st round many voters crossed off all the names in their ballots and wrote across ‘Vladimir Putin for president of Ukraine.’ Even though Putin never ran…

Meantime, Poroshenko plastered the entire Ukraine with billboards depicting him and Putin. The slogan he runs under: ‘It’s either me or Putin.’ I guess people heard him loud and clear and… Putin won. Only 16% voted for Poroshenko in the 1st round. And the consensus is that several percentage points were blatantly added to his real numbers, so he would bypass Timoshenko and get into the second round.

This means that 84% voted for Putin. CONGRATULATIONS, Vladimir Vladimirovich!

But 1st round defeat wasn’t enough. The new Putin vs. Poroshenko billboards all over Ukraine say: ‘April 21, final choice!’ Putin already won, but let’s confirm it again on April 21, lol.

Btw, per polls the vast majority of those…

Spot on as usual, keep up the great work Lada!

Case In point: this video from today:

Despite the many stellar predictions that consistently come true since at least 2012 – show me anyone else presently in existence who CAN do that –  I get very few likes for my videos on YouTube! Not to mention the catastrophically few likes on FuturisTrendcast!

SO WHAT, NO ONE’S INTERESTED IN THE TRUTH? AND NO ONE WANTS THE REAL DEAL? That is VERY SAD INDEED!

And there were also unusually many DISLIKES for the Brexit prediction on my Earth Shift Podcast 6!

WikiLeaks founder Julian Assange has been arrested at the Ecuadorian Embassy in London—that’s almost seven years after he took refuge in the embassy to avoid extradition to Sweden over a sexual assault case.

According to a short note released by London’s Metropolitan Police Service, Assange was arrested immediately after the Ecuadorian government today withdraws his political asylum.

Assange has now been taken into custody at a central London police station, from where he will be presented before Westminster Magistrates’ Court as soon as possible.

U.S. Department of Justice also confirmed today that Assange would face extradition proceedings for his alleged role in “one of the largest compromises of classified information in the history of the United States.”

“The indictment [unsealed today] alleges that in March 2010, Assange engaged in a conspiracy with Chelsea Manning, a former intelligence analyst in the U.S. Army, to assist Manning in cracking a password stored on U.S. Department of Defense computers connected to the Secret Internet Protocol Network (SIPRNet), a U.S. government network used for classified documents and communications.”

Following his arrest on Thursday, Ecuadorian President Lenín Moreno tweeted, “In a sovereign decision, Ecuador withdrew the asylum status to Julian Assange after his repeated violations to international conventions and daily-life protocols.”

Assange’s arrest comes a day after WikiLeaks editor Kristinn Hrafnsson accused the Ecuadorian government of an extensive spying operation against Julian Assange inside the Ecuadorian embassy.

Assange was wanted by British police for failing to surrender to the Westminster Magistrates’ Court in August 2012, while he was under investigation for sexual assault and rape allegations in Sweden.

Although Sweden dropped its preliminary investigation into the rape accusation against Julian Assange in 2017, Assange chose not to leave the Ecuadorian Embassy due to fears of extradition to the United States.

In the United States, Assange is facing federal charges for leaking diplomatic cables and military documents through his popular publication WikiLeaks in 2010 that embarrassed the U.S. governments across the world.

Although U.S. authorities have never officially confirmed the charges against Assange, late last year U.S. prosecutors accidentally revealed the existence of criminal charges against him in a document filed in an unrelated sex crime case.

Assange, the 47-year-old Australian hacker, founded WikiLeaks in 2006 and has since made many high-profile revelations through the platform, exposing ‘dirty’ secrets of several political parties, individuals, and government organizations across the world.

Assange has been forced to live in London’s Ecuadorian Embassy since June 2012, when a U.K. court ordered his extradition to Sweden to face sexual assault and rape charges filed against him.

However, his relationship with Ecuador has deteriorated in the past year. The country had cut him off the Internet since March 2018 after he breached its agreement to refrain from interfering in other states’ affairs that could affect the country’s relationship with other nations.

The circumstances even made it difficult for Assange to do his job of editor-in-chief to run WikiLeaks and forced the whistleblower organization to appoint its new editor-in-chief, Kristinn Hrafnsson.

In July last year, the Ecuadorian President also reportedly visited London to finalize a deal with UK government to withdraw Assange’s asylum protection—eventually turning him over to Britain where he is facing an arrest warrant after skipping a bail payment.