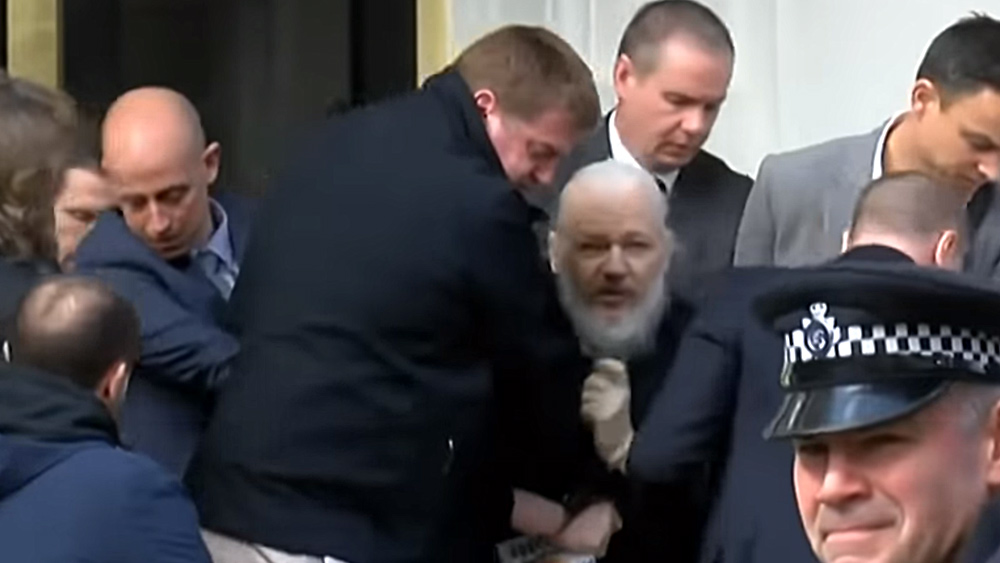 (Natural News) ANALYSIS: The arrest of Julian Assange was actually triggered by DOJ AG William Barr telling the world that yes, Obama’s deep state operatives spied on Trump campaign officials. Now, the deep state is in a total panic, and they are pulling out all the stops to try to frame Trump and derail the DOJ investigation that will reportedly lead to criminal indictments by June.

Those likely to be indicted include Peter Strzok, Lisa Page, Andrew McCabe, John Brennan, James Clapper and many others who attempted to carry out treason against America, as President Trump stated today. They attempted a coup; they got caught; and now they are going to face the legal consequences of their lawless, criminal actions. (The entire left-wing media was also part of this criminal conspiracy against America… will the fake news journo-terrorists ever face arrest for their role in the plot?)

But the deep state isn’t dead yet. They still run large groups of operatives inside the State Department, the FBI and even the DOJ. And traitorous globalist criminal Barack Obama sits on top of all these groups, running “the resistance” from his command bunker near the Capitol in D.C. Make no mistake: Obama is behind the arrest of Julian Assange, and the gambit here is to pressure Assange to fabricate accusations that implicate President Trump in the “Russia collusion” hoax that has already imploded.

Corrupt Democrat Senator Joe Manchin has now declared Julian Assange to be “our property,” claiming it will, “be really good to get him back on United States soil.” Where, obviously, he can be tortured at will by Obama deep state operatives. Note that this Democrat senator refers to a human being — Julian Assange — as government “property” in much the same way plantation owners once categorized their own slaves as “property.” Is it any wonder the KKK was a creation of southern Democrats like Joe Manchin?

Thus, the very next thing that’s going to happen is that Assange will be transported to a U.S. torture facility run by Obama loyalists, and he will be repeatedly tortured until he agrees to fabricate fake testimony against President Trump. This is what happens to journalists in a world run by corrupt Leftists like Obama and the Clintons, all of whom are globalist criminals with a long history of ordering executions of their political enemies. (The Clinton body bag “conspiracy” isn’t a conspiracy; it’s real history as former special prosecutor Ken Starr suddenly admitted yesterday.)

If President Trump pardons Assange, that act will be labeled “obstruction of justice” and set off calls for a whole new Mueller investigation. Remember, it was Trump’s firing of former FBI director James Comey that set off the initial Robert Mueller investigation that was launched for the sole purpose of destroying President Trump and reversing the 2016 election. Robert Mueller has known since at least the summer of 2017 that the Russia collusion conspiracy was a complete hoax, yet he fed the delusions of the left-wing media to keep the collusion alive, helping Democrats steal the 2018 elections and gain control over the House of Representatives. (Robert Mueller is a traitor who should be arrested and charged with treason. He has destroyed the lives of countless innocent Americans, including Michael Flynn and Roger Stone.)

For similar political reasons, Trump is very unlikely to pardon Julian Assange right now, even though that would be the ethical action here. Instead, Trump will likely work behind the scenes to apply pressure to the deep state operatives who have kidnapped and are planning on torturing Assange. If those individuals can be exposed and expelled from government, Assange may only face a relatively minor sentence for “hacking,” and an ethical judge might even grant Assange seven years of credit for “time served” as a prisoner in the Ecuadorian embassy in London.

In effect, Assange could be set free, but he first has to survive the torture effort that will be used to try to force him to “compose” false testimony against Trump. There will be no holding back on the efforts to threaten, intimidate and physically torture Julian Assange because the deep state will do anything — absolutely anything — to take down Donald Trump.

Yes, we are now living in a world where Obama / Clinton deep state operatives TORTURE journalists

In case you aren’t fully grasping what I’m revealing here, yes, we are now living in a world where Obama / Clinton deep state operatives will do anything to destroy Trump, including killing or torturing journalists.

Have no illusions: The Obama regime was a criminal regime, and it never gave up power. Obama operatives are still alive and well inside the State Dept., the FBI, DOJ, IRS, EPA and every other corrupt government agency you can think of. They are all working tirelessly to destroy Trump, overrule the voters and establish permanent Democrat authoritarian rulein the United States of America by any means necessary.

Evil tech giants like Google, Twitter and Facebook are conspiring with the deep state to selectively censor all pro-Trump voices under “hate speech” rules, effectively silencing conservatives, Christians and constitutionalists. Sen. Ted Cruz is well aware of what’s happening and is now calling for investigations into widespread fraud being carried out by social media platforms and search engines.

Journalist Glenn Greenwald is already sounding off on all this, warning journalists that if they don’t stand up for Assange, they don’t really stand for journalism at all:

The UK police also confirm that they’ve arrested Assange “in relation to an extradition warrant on behalf of the United States authorities.” Dems cheering this are united with the Trump DOJ in an extremist action that the Obama DOJ refused to take: https://twitter.com/metpoliceuk/status/1116302894259679233 …

If you’re a US media star who has spent 2 years claiming to be so concerned about press freedoms over Trump’s mean tweets about your friends, but don’t raise your voice in protest over this grave attack on press freedom, take a hard look in the mirror https://www.theguardian.com/commentisfree/2019/apr/09/the-guardian-view-on-julian-assange-it-would-be-wrong-to-extradite-him?utm_term=Autofeed&CMP=twt_gu&utm_medium=&utm_source=Twitter#Echobox=1554831501 …

The Guardian view on Julian Assange: it would be wrong to extradite him | Editorial

Editorial: The WikiLeaks founder has been in Ecuador’s embassy in London since 2012. Clear judgment will be required if he now leaves his self-imposed retreat

3,008 people are talking about this

For the record, Julian Assange did exactly the same thing the New York Times did when it published the Pentagon Papers. The ability for a journalism organization to receive and then publish classified materials has already been well established by the U.S. Supreme Court. Yet when it comes to information the U.S. military industrial complex finds uncomfortable, they will stop at nothing to criminalize journalism (and may even attempt to execute or torture individual journalists who are involved).

Never forget: Obama’s deep state fabricated sex assault charges against Assange and pressured foreign jurisdictions to level those charges locally. These are the same people who fabricated the “Trump dossier” which was used to illegally spy on Trump campaign officials via FISA court abuses (all carried out by James Clapper, John Brennan, James Comey, Peter Strzok and the rest of the corrupt bunch of treasonous traitors).

Sadly, Julian Assange is now a pawn in a high stakes deep state ploy to halt the coming criminal indictments of Obama-era officials and try to turn the tables on Trump yet again, to get him thrown out of office.

The American people need to rise up and defend Julian Assange and denounce the deep state, Barack Obama’s countless crimes, and the entire left-wing coordinated coup that tried to overthrow the United States of America and turn it into a left-wing fascist regime run by criminals and tyrants.

I say it’s time to arrest and imprison every individual who took part in the attempted coup against President Trump, including the fake news “journalists” who directly colluded with deep state officials to lie to the American public and falsely accuse Trump of treason.

Be prepared to take America back. And be prepared to join Trump’s effort to locate, arrest and imprison all traitors who are actively working to bring down America from within. The left-wing media is the enemy of the People. And there are numerous mayors and governors who should all be arrested and imprisoned for their ongoing treason against America and their efforts to destroy the liberties of Americans.

And pray for Julian Assange. Demand he be set free, and demand real justice against those who tried to frame him.