July 24, 2019 “Information Clearing House” –  ”For two years, Democrats have waited on Robert Mueller to deliver a death blow to the Trump presidency,” The New York Times observed on July 20. “On Wednesday, in back-to-back hearings with the former special counsel, that wish could face its final make-or-break moment.” The very fact that Democrats had to subpoena Mueller in order to create this final moment should in fact be the final reminder of what a mistake it was for Democrats to have waited on him. If Mueller had incriminating information yet to share, or had been stymied from doing his work, or if Attorney General William Barr had somehow misrepresented his findings, then it stands to reason that Mueller would be welcoming the opportunity to appear before Congress, not resisting it. The reality is that Mueller’s investigation did not indict anyone on the Trump campaign for collusion with Russia, or even for anything related to the 2016 election. Mueller’s report found no evidence of a Trump-Russia conspiracy, and even undermined the case for it.

That said, there are unresolved matters that Mueller’s testimony could help clarify. Mueller claimed to have established that the Russian government conducted “a sweeping and systematic” interference campaign in order to elect Trump, yet the contents of his report don’t support that allegation. The Mueller report repeatedly excludes countervailing information in order to suggest, misleadingly, that the Trump campaign had suspect “links” and “ties” to people connected with Russia. And Mueller and other intelligence officials involved in the Russia probe made questionable investigative decisions that are worthy of scrutiny. To address these issues, here are some questions that Mueller could be asked.

I should note that missing from my list is anything related to obstruction. This topic will surely dominate Democrats’ line of questioning, but I view it as secondary and more appropriate for a law school seminar. The core issue of the Mueller investigation is alleged Russian interference in the 2016 election and the Trump campaign’s potential coordination with it. The obstruction issue only began to dominate after it was clear that Mueller had found no such conspiracy. Although the report does show examples of Trump’s stated intent to impede the Mueller investigation, the probe itself was unhindered.

There is also the fact that Mueller himself declined to make a call on obstruction, and even presented arguments that could be used to refute it. The obstruction section of the report notes that Trump was not “involved in an underlying crime related to Russian election interference.” Although not dispositive, Mueller says that “the absence of that evidence affects the analysis of the President’s intent and requires consideration of other possible motives for his conduct.” In a joint statement with Barr, Mueller also made clear that “he was not saying that, but for the [Office of Legal Counsel] opinion, he would have found the President obstructed justice.” Accordingly, I see no reason why congressional Democrats are so confident that Mueller found otherwise.

The views expressed in this article are solely those of the author and do not necessarily reflect the opinions of Information Clearing House. 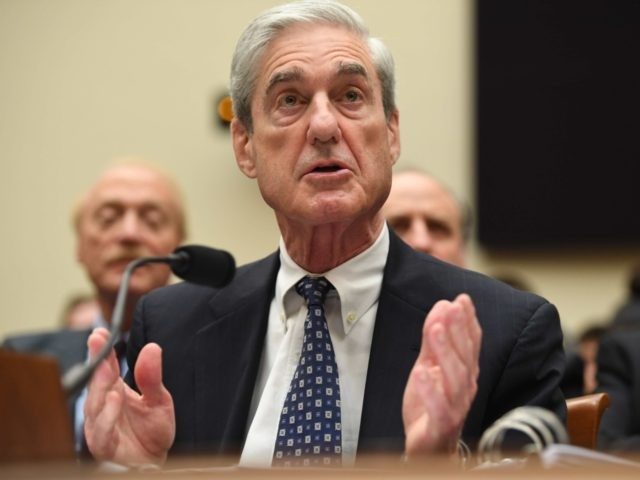 Former Special Counsel Robert Mueller told the House Judiciary Committee repeatedly on Wednesday morning that the potential collusion between Democrats and Russians in the 2016 presidential election was “outside my purview.”

Though his mandate required him to investigate Russian interference in the election without specific reference to a particular candidate or party, Mueller made it clear he had only investigated President Donald Trump’s campaign.

Under questioning by Rep. Steve Chabot (R-OH), Mueller seemed confused, at times, about the very question:

Mueller: I’m not familiar with that.

Chabot: It’s not a trick question. It was Fusion GPS. It produced the opposition research document widely known as the Steele dossier and the owner of Fusion GPS was someone named Glen Simpson. Are you familiar with — ?

Mueller: That’s outside of my purview.

Chabot: Glen Simpson was never mentioned in the 448-page Mueller report, was he?

Mueller: Well, as I said, it’s out outside my purview and it’s being handled in the department by others.

Chabot: He was not. 448 pages, the owner of Fusion GPS that did the Steele dossier that started all this, he’s not mentioned in there. Let me move on. At the same time, Fusion GPS was working to collect opposition research on Donald Trump from foreign sources on behalf of the Clinton campaign and the Democratic National Committee. It also was representing a Russian-based company, Prevezon, which had been sanctioned by the U.S. government. Are you aware of that?

Mueller: It’s outside my purview.

Chabot: Thank you. One of the key players — I’ll go to something different — one of the key players in the June 2016 Trump Tower meeting was Natalia Veselnitskaya, who you described in your report as a Russian attorney who advocated for the repeal of the Magnitsky Act. Veselnitskaya had been working with none other than Glen Simpson and Fusion GPS since at least early 2014. Are you aware of that?

Mueller: That’s outside my purview.

Chabot: Thank you. You didn’t mention that or her connections to Glen Simpson at Fusion GPS in your report at all. Let me move on. Now, NBC News has reported the following: quote, “Russian lawyer Natalia Veselnitskaya says she first received the supposedly incriminating information she brought to Trump Tower describing alleged tax evasion and donation to Democrats from none other than Glen Simpson, the Fusion GPS owner. You didn’t include that in the report and I assume —

Mueller: This is a matter being handled by others in the Department of Justice.

Chabot: Thank you, Now, your report spends 14 pages discussing the June 9th, 2016, Trump Tower meeting. It would be fair to say, would it not, that you spent significant resources investigating that meeting?

Mueller: I refer you to the report.

Chabot: OK. And President Trump wasn’t at the meeting.

Mueller: No. He was not.

Chabot: Well, I tell you — It’s still outside my purview.

Mueller: I would just note finally that I guess it is by chance, by coincidence, the things left out of the report tended to be favorable to the president.

Buddha does not die, he disappears into our concept of God. Jesus melts into the ocean of our God. And the people who are not yet awakened, they also don’t die. They have to come back again and again into some form, because the only possibility of being awakened is through forms.

The world is a context for becoming awakened, an opportunity.