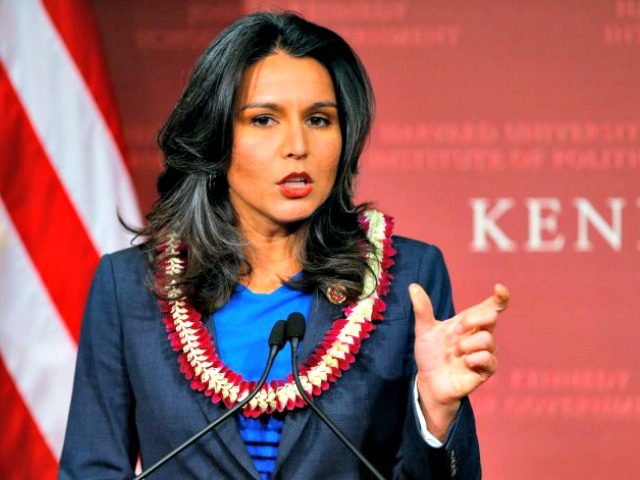 Gabbard’s complaint accuses Google of censoring the candidate at the very moment when millions of Americans wanted to learn more about her. It also accuses Google of sending Gabbard’s campaign emails to people’s Gmail spam folders at a “disproportionately high rate.”

The campaign seeks a legal injunction against Google to prevent further election meddling, as well as $50 million in damages.

Via Gabbard’s legal complaint against Google:

At the height of Gabbard’s popularity among Internet searchers in the immediate hours after the debate ended, and in the thick of the critical post-debate period (when television viewers, radio listeners, newspaper read-ers, and millions of other Americans are discussing and searching for presidential candidates), Google suspended Tulsi’s Google Ads account without warning.

For hours, as millions of Americans searched Google for information about Tulsi, and as Tulsi was trying, through Google, to speak to them, her Google Ads account was arbitrarily and forcibly taken offline. Throughout this period, the Campaign worked frantically to gather more information about the suspension; to get through to someone at Google who could get the Account back online; and to understand and remedy the restraint that had been placed on Tulsi’s speech—at precisely the moment when everyone wanted to hear from her.

The legal complaint argues that Google could have a nefarious impact on American democracy if its behavior is allowed to continue unchecked. This is the viewpoint of Dr. Robert Epstein, who says the Silicon Valley Masters of the Universe will “go all out” to influence the 2020 election.

In a series of Tweets, the Hawaii Democrat said Google’s actions “reveals the danger of their dominance & how the dominance of big tech over public discourse threatens core American values.”

TULSI2020: In the hours following the 1st debate, while millions of Americans searched for info about Tulsi, Google suspended her search ad account w/o explanation. It is vital to our democracy that big tech companies can’t affect the outcome of elections http://tulsi.to/tulsi-vs-google

6,778 people are talking about this

2/3 – #Google controls 88% of internet search in the US — giving it control over our access to information. Google’s arbitrary suspension of the account of a presidential candidate should be of concern to all Americans. http://tulsi.to/tulsi-vs-google

3/3 – Google’s discrimination against our campaign reveals the danger of their dominance & how the dominance of big tech over public discourse threatens core American values. They threaten our democracy & #Tulsi will fight back on behalf of all Americans. http://tulsi.to/tulsi-vs-google

1,256 people are talking about this

Are you a source at Amazon, Facebook, Google, or any other corporation who wants to confidentially share information about wrongdoing or political bias at your company? Reach out to Breitbart Senior Technology correspondent Allum Bokhari at allumbokhari@protonmail.com. Use a free Protonmail to ensure your message is encrypted.