September 05, 2019 “Information Clearing House” – There have been several interesting developments in the United States government’s war on free speech and privacy.

First of all, the Department of Homeland Security’s (DHS) Customs and Border Protection Agency (CBP), which is responsible for actual entry of travelers into the country, has now declared that it can legally access phones and computers at ports of entry to determine if there is any subversive content which might impact on national security.

“Subversive content” is, of course, subjective, but those seeking entry can be turned back based on how a border control agent perceives what he is perusing on electronic media.

Unfortunately, the intrusive nature of the procedure is completely legal, particularly as it applies to foreign visitors, and is not likely to be overturned in court in spite of the Fourth Amendment’s constitutional guarantee that individuals should “…be secure in their persons, houses, papers, and effects, against unreasonable searches and seizures.”

Someone at a port of entry is not legally inside the United States until he or she has been officially admitted. And if that someone is a foreigner, he or she has no right by virtue of citizenship even to enter the country until entry has been permitted by an authorized US Customs and Border Protection official. And that official can demand to see anything that might contribute to the decision whether or not to let the person enter.

And there’s more to it than just that. Following the Israeli model for blocking entry of anyone who can even be broadly construed as supporting a boycott, the United States now also believes it should deny admittance to anyone who is critical of US government policy, which is a reversal of previous policy that considered political opinions to be off-limits for visa denial.

DHS, acting in response to pressure from the White House, now believes it can adequately determine hostile intent from the totality of what appears on one’s phone or laptop, even if the material in question was clearly not put on the device by the owner. In other words, if a traveler has an email sent to him or her by someone else that complains about behavior by the United States government, he or she is responsible for that content.

One interesting aspect of the new policy is that it undercuts the traditional authority of US Embassies and Consulates overseas to issue visas to foreigners. The State Department visa process is rigorous and can include employment and real property verification, criminal record checks, social media reviews and Google-type searches. If there is any doubt about the visa applicant, entry into the US is denied.

With the new DHS measures in place, this thoroughly vetted system is now sometimes being overruled by a subjective judgment made by someone who is not necessarily familiar with the traveler’s country or even regarding the threat level that being a citizen of that country actually represents.

Given the new rules regarding entering the United States, it comes as no surprise that the story of an incoming Harvard freshman who was denied entry into the United States after his laptop and cellphone were searched at Boston’s Logan Airport has been making headlines. Ismail Ajjawi, a 17-year-old Palestinian resident of Lebanon, was due to begin classes as a freshman, but he had his student visa issued in by the US Embassy in Beirut rejected before being flown back to Lebanon several hours later.

Ajjawi was questioned by one immigration officer who asked him repeatedly about his religion before requiring him to turn over his laptop and cell phone. Some hours later, the questioning continued about Ajjawi’s friends and associates, particularly those on social media. At no point was Ajjawi accused of having himself written anything that was critical of the United States and the interrogation rather centered on the views expressed by his friends.

The decision to ban Ajjawi produced such an uproar worldwide that it was reversed a week later, apparently as a result of extreme pressure exerted by Harvard University. Nevertheless, the decisions to deny entry are often arbitrary or even based on bad information, but the traveler normally has no practical recourse to reverse the process. And the number of such searches is going up dramatically, numbering more than 30,000 in 2017, some of which have been directed against US residents.

Even though permanent resident green card holders and citizens have a legal right to enter the United States, there are reports that they too are having their electronic media searched. That activity is the subject of an American Civil Liberties Union (ACLU) lawsuit against the Department of Homeland Security that is currently working its way through the courts. The ACLU is representing 10 American citizens and a legal permanent resident who had their media searched without a warrant as required by the Fourth Amendment.

It is believed that many of the arbitrary “enforcements” by the CBP are carried out by the little-known Tactical Response Team (TRT) that targets certain travelers that fit a profile. DHS officials confirmed in September 2017 that 1,400 visa holders had been denied entry due to TRT follow-up inspections. And there are also reports of harassment of American citizens by possible TRT officials.

A friend of mine was returning from Portugal to a New York Area airport when he was literally pulled from the queue as he was departing the plane. A Customs agent at the jetway was repeatedly calling out his birth date and then also added his name. He was removed from the line and taken to an interrogation room where he was asked to identify himself and then queried regarding his pilot’s license. He was then allowed to proceed with no other questions, suggesting that it was all harassment of a citizen base on profiling pure and simple.

My friend is a native-born American who has a Master’s degree and an MBA, is an Army veteran and has no criminal record, not even a parking ticket. He worked for an American bank in the Middle East more than thirty years ago, which, together with the pilot’s license, might be the issue these days with a completely paranoid federal government constantly on the lookout for more prey “to keep us safe.”

Unfortunately, keeping us safe has also meant that freedom of speech and association as well as respect for individual privacy have all been sacrificed. As America’s Founding Father Benjamin Franklin once reportedly observed, “Those who would give up essential Liberty, to purchase a little temporary Safety, deserve neither Liberty nor Safety.”

Philip M. Giraldi, Ph.D., is Executive Director of the Council for the National Interest, a 501(c)3 tax deductible educational foundation (Federal ID Number #52-1739023) that seeks a more interests-based U.S. foreign policy in the Middle East. Website is councilforthenationalinterest.org, address is P.O. Box 2157, Purcellville VA 20134 and its email is inform@cnionline.org

This article was originally published by “Strategic Culture Foundation “ – –

Twitter today finally decided to temporarily disable a feature, called ‘Tweeting via SMS,’ after it was abused by a hacking group to compromise Twitter CEO Jack Dorsey last week and sent a series of racist and offensive tweets to Dorsey’s followers.

Dorsey’s Twitter account was compromised last week when a hacker group calling itself “Chuckling Squad” replicated a mobile phone number associated with the CEO account and abused this particular feature to post racist, offensive messages and bomb threats from it via SMS.

Replicating a mobile phone number associated with someone else is a technique known as “SIM swapping,” where attackers social engineer a victim’s mobile phone provider and trick the telecom company to transfer target’s phone number to their own SIM card.

Once they social engineered an AT&T employee and gained access to Dorsey’s phone number, the Chuckling Squad hackers used the ‘Tweeting via SMS’ feature to post tweets under his username, even without actually logging in to his account.

Twitter says the phone number associated with the account was compromised due to a security oversight by the mobile provider, allowing unauthorized person to compose and send tweets via text message from the phone number 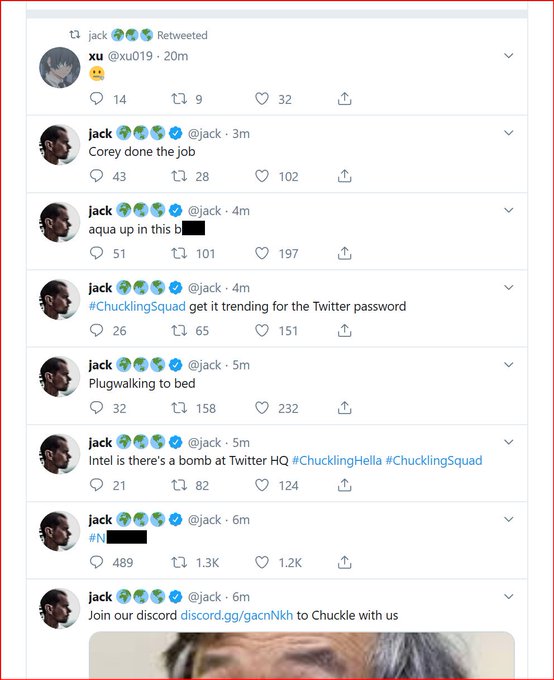 217 people are talking about this

This feature was once the most popular way to use Twitter in its early days when most people relied on phones with no internet connection, especially when in some countries government imposes Internet blackouts to quell protests and revolutions.

However, the feature still exists and has been misused several times in the past since no authentication is required other than just having access to the linked phone number.

In a series of tweets published today, Twitter says it has temporarily disabled this feature and working on improving it by exploring options to offer an authenticated way.

“We’re taking this step because of vulnerabilities that need to be addressed by mobile carriers and our reliance on having a linked phone number for two-factor authentication (we’re working on improving this),” the company said.

“We’ll reactivate this in markets that depend on SMS for reliable communication soon while we work on our longer-term strategy for this feature.”

However, the company has not provided any timeline of the reactivation of this feature.

Dorsey is not the only person falling victim to SIM swapping attack in recent days. Other victims whose accounts have recently been compromised by Chuckling Squad include actress Chloë Grace Moretz and a number of social media influencers with large followers.