October 16, 2019 “Information Clearing House” –   The Syrian and Russian operations in the northeast of Syria are going well.

Russian troops prevented attempts by Turkish supported Jihadis to attack Manbij. Russian and Syrian units now also entered Ayn al-Arab/Kobani. Syrian government troops took control of the electricity producing dam in Tabqah and some units set up posts in Raqqa. Other units entered the Conoco and Al-Umar oil fields north of Abu Kahmal and east of Deir Ezzor. Some local tribe which profited from the oil explorations there held a small protest against the return of government control. 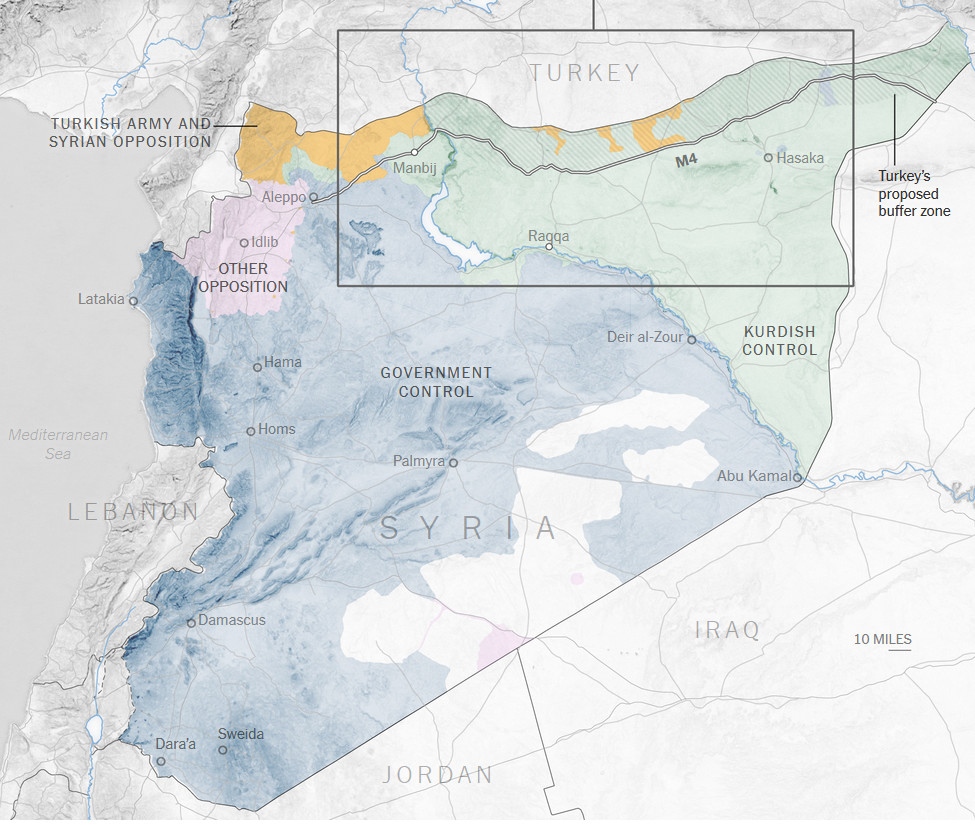 The Turkish controlled Jihadis made little progress. Mostly Kurdish fighters are preventing them from expanding from the area they are informally allowed to hold. The Turkish command has called up more irregular ‘rebel’ troops including Jihadis from Jaish al-Islam who had once controlled Ghouta in the east of Damascus. They had been transported to Idleb after their defeat. A video shows them on a bus traveling through Turkey to reinforce the Turkish attack.

The Russian air force in Syria is preventing the use of the Turkish air-force in support of the Turkish attacks. Yesterday a Turkish F-16 entered Syrian air space but retreated when some Russian fighters appeared to hunt for it.

The U.S. is continuing its retreat from northeast Syria. Yesterday a video by a Russian journalist showed the inside of one of a camps that U.S. troops had hastily left. There was still food on the table and the Cokes in the fridge were still cold. The view was a bit embarrassing. Today the U.S. bombed a U.S./French military base in Kharab’ Ashaq near the Lafarge cement factory shortly after its troops had left it. The likely intent was to prevent more embarrassing pictures.

Turkey still insists on a corridor of some 20 kilometers depth to prevent a PKK build up in the area near its border. At that depth Turkey would occupy the M4 highway which is a main economic corridor in the northern area. Under the Adana agreement from 1998 Turkey is allowed to make temporary incursions at the border up to a depth of 5 kilometer to fight any PKK concentration. Anything beyond that infringes on Syria’s sovereignty and can not be tolerated.

Under the same treaty Syria is obligated to prevent any PKK camps or training areas in Syria. The U.S built ‘Syrian Democratic Forces’ are nothing but the PKK with a few drafted Arabs mixed in. The SNC will soon be dissolved into the Syrian Arab Army and the autonomous Kurdish administration will be removed. All that will alleviate the Turkish concerns and remove its justification for any occupation of Syrian land.

The mainstream borg is up in arms that Turkey uses Jihadis to attack their beloved anarcho-marxist PKK terrorists group. They have conveniently forgotten the history of the U.S. war on Syria, its arming of those Jihadis and its pampering of al-Qaeda.

The U.S. did not betray the Kurds any more than it betrayed Turkey and the Jihadis which the Obama administration armed throughout the war. Those were also U.S. ‘allies’ that were left hanging. Raina Khalek made a good video narrative that debunks much of the false Syria narrative the main stream media is now using.

To prevent Congress from putting harsh sanctions on Turkey, President Trump issued his own milder ones that will not do any harm to Turkey’s economy. He has also sent Vice President Pence to talk with President Erdogan. It is just a bit of show to limit the fall out from the Turkish operation.

Everyone involved recognizes that this is a win-win-win-win situation. Erdogan could show that he was fighting against the PKK terrorists and prevented their attempts to become a proto-state. Trump could hold his campaign promise of removing U.S. troops from useless foreign interventions. Syria regained its northeast and the important economic resources of that area. Russia gained global prestige and additional influence in the Middle East.

Everyone is happy but the PKK Kurds. They are the biggest losers of this game but only in the sense that they are back to where they started. They had entered into a cooperation with the U.S. to eliminate ISIS. When that was done they got greedy and tried to rule over Arab land. It was always an unsustainable situation. After the defeat of ISIS the U.S. had no strategic reason to further pamper them. Only some wannabe imperialists in Washington DC and in Israel were urging to continue the relation.

There are signs that the series of events was preplanned and somewhat coordinated. There were intensive talks between Russia and Turkey and many phone calls between Trump and Erdogan. There were also talks we do not know about. Syrian and Russian troops were ready to enter the northeast.

It is likely that the plans of these actors extend beyond the northeast and include a solution for the Jihadi controlled Idleb governorate. It will be the next area where some surprising co-operations are likely to happen.

Added: This Trump answer to a question about Syria makes much sense.

This article was originally published by “Moon Of Alabama“- –