The fake negotiations did not change the larger win-win-win-win plan or the facts on the ground. The Syrian Arab Army is replacing the Kurdish PKK/YPG troops at the border with Turkey. The armed PKK/YPG forces, which had deceivingly renamed themselves (vid) “Syrian Democratic Forces” to win U.S. support, will be disbanded and integrated into the Syrian army. Those moves are sufficient to give Turkey the security guarantees it needs. They will prevent any further Turkish invasion.

Turkey agreed Thursday to a cease-fire that would suspend its march into Syria and temporarily halt a week of vicious fighting with Kurdish forces, while allowing President Recep Tayyip Erdogan’s government to carve out a long-coveted buffer zone far beyond its borders.

The agreement, announced by Vice President Pence after hours of negotiations, appeared to hand Turkey’s leader most of what he sought when his military launched an assault on northeastern Syria just over a week ago: the expulsion of Syrian Kurdish militias from the border and the removal of a U.S. threat to impose sanctions on Turkey’s vulnerable economy.

Pence said Turkey had agreed to pause its offensive for five days while the United States helped facilitate the withdrawal of ­Kurdish-led forces, called the ­Syrian Democratic Forces (SDF), from a large swath of territory stretching from Turkey’s border nearly 20 miles south into Syria. After the completion of the Kurdish withdrawal, Turkey’s military operation, which began Oct. 9, would be “halted entirely,” Pence said.

The cease-fire agreement reached with Turkey by Vice President Mike Pence amounts to a near-total victory for Turkey’s president, Recep Tayyip Erdogan, who gains territory, pays little in penalties and appears to have outmaneuvered President Trump.

The best that can be said for the agreement is that it may stop the killing in the Kurdish enclave in northern Syria. But the cost for Kurds, longtime American allies in the fight against the Islamic State, is severe: Even Pentagon officials were mystified about where tens of thousands of displaced Kurds would go, as they moved south from the Turkey-Syria border as required by the deal — if they agree to go at all.
…
Military officials said they were stunned that the agreement essentially allowed Turkey to annex a portion of Syria, displace tens of thousands of Kurdish residents and wipe away years of counterterrorism gains against the Islamic State.

Turkey will not “gain territory”. There will be no Turkish “security corridor”. The Kurdish civilians in Kobani, Ras al Ain and Qamishli areas will not go anywhere. The Turks will not touch those Kurdish majority areas because they are, or soon will be, under control of the Syrian government and its army. 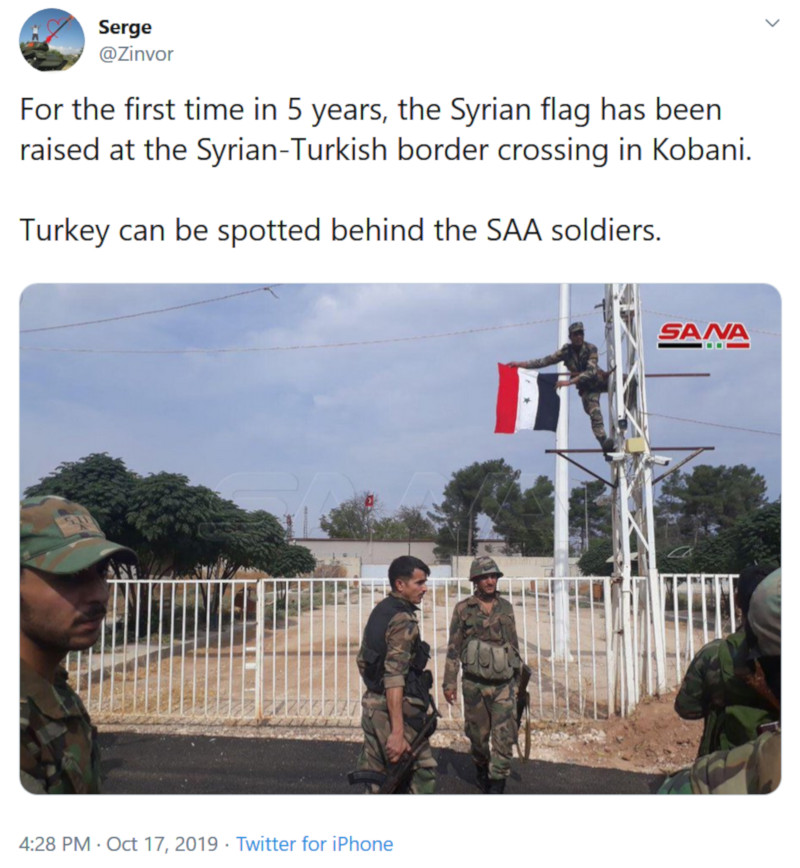 The picture, taken yesterday, shows the Syrian-Turkish border crossing north of Kobani. The Syrian army took control of it and raised the Syrian flag. There are no longer any Kurdish forces there that could threaten Turkey.

Russia “promised that the PKK or YPG will not be on the other side of the border,” Cavusoglu said in an interview with the BBC. “If Russia, accompanied by the Syrian army, removes YPG elements from the region, we will not oppose this.”

Even partisan Syrians opposed to its government recognize the ploy:

Rami Jarrah @RamiJarrah – 12:53 UTC · Oct 17, 2019
Turkey’s foreign minister once again reiterates that if Russia and the Syrian regime take over border areas they will not object, as long as the PYD are expelled.
This has to be the easiest land grab opportunity Assad has had since the war started.

These moves have been planned all along. The Turkish invasion in northeast Syria was designed to give Trump a reason to withdraw U.S. troops. It was designed to push the Kurdish forces to finally submit to the Syrian government. Behind the scene Russia had already organized the replacement of the Kurdish forces with Syrian government troops. It has coordinated the Syrian army moves with the U.S. military. Turkey had agreed that Syrian government control would be sufficient to alleviate its concern about a Kurdish guerilla and a Kurdish proto-state at its border. Any further Turkish invasion of Syria is thereby unnecessary.

The plan has everyone winning. Turkey will be free of a Kurdish threat. Syria regains its territory. The U.S. can leave without further trouble. Russia and Iran gain standing. The Kurds get taken care of.

The ‘ceasefire’ and the retreat of the armed Kurdish groups from the border, which is claimed to have been negotiated yesterday between Pence and Erdogan, had already been decided on before the U.S. announced its withdrawal from Syria.

Assad trusts that Russia will succeed in halting the Turkish advance and reduce its consequences, perhaps by asking the Kurds to pull back to a 30 km distance from the Turkish borders to satisfy President Erdogan’s anxiety. That could also fit the Turkish-Syrian 1998 Adana agreement (5 km buffer zone rather than 30 km) and offer tranquillity to all parties involved. Turkey wants to make sure the Kurdish YPG, the PKK Syrian branch, is disarmed and contained. Nothing seems difficult for Russia to manage, particularly when the most difficult objective has already been graciously offered: the US forces’ withdrawal.

What Magnier describes is exactly what Pence and Erdogan agreed upon after he wrote it because it was – all along – part of the larger common plan.

Donald J. Trump @realDonaldTrump – 20:13 UTC · Oct 17, 2019
This is a great day for civilization. I am proud of the United States for sticking by me in following a necessary, but somewhat unconventional, path. People have been trying to make this “Deal” for many years. Millions of lives will be saved. Congratulations to ALL!

The question is now if the U.S. will stick to the deal or if the pressure on President Trump will get so heavy that he needs to retreat from the common deal. The U.S. must move ALL its troops out of northeast Syria for the plot to succeed. Any residual U.S. force, even an unsustainable small one, will make the situation much more complicate.

That the U.S. media and pundits completely misread the situation is a symptom of a wider failure. As Anatol Lieven describes the mess of U.S. Middle Eastern strategy:

This pattern has its roots in the decay of the US political system and political establishment at home, including the power of lobbies and their money over US policy in key areas; the retreat of area studies in academia and think tanks, leading to sheer ignorance of some of the key countries with which the USA has to deal; the self-obsession, self-satisfaction and ideological megalomania that in every dispute leads so much of the US establishment and media to cast the USA as a force of absolute good, and its opponents as absolutely evil; and the failure – linked to these three syndromes – to identify vital and secondary interests and choose between them ..

Only a few pundits in the U.S. recognize reality. Stephen Walt:

The bottom line: The solution to the situation in Syria is to acknowledge Assad’s victory and work with the other interested parties to stabilize the situation there. Unfortunately, that sensible if unsavory approach is anathema to the foreign-policy “Blob”—Democrats and Republicans alike—and its members are marshaling the usual tired arguments to explain why it’s all Trump’s fault and the United States should never have withdrawn a single soldier.

I am confident for now that the blob will be held off by Trump and that the Win4 plan will succeed. Erdogan will soon travel to Russia to discuss the next steps towards peace in Syria. The talks will be about a common plan to liberate the Jihadi controlled governorate of Idleb. That step may require a summit between the Syrian President Bashar al-Assad and Erdogan which Russia and Iran will help to facilitate.

With the U.S. removed from the Syria scenario such steps towards peace will now be much easier.

This article was originally published by “Moon Of Alabama“- –