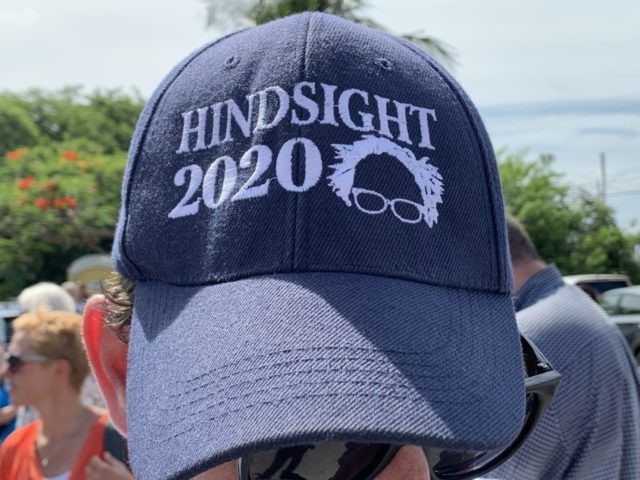 DES MOINES, Iowa — The feeling on the ground in Iowa is that Sen. Bernie Sanders (I-VT) has a shot at winning the caucuses on Feb. 3.

Nothing is definite, and caucuses are notoriously difficult to poll and to predict.

Still, one can “feel the Bern” as one drives around the frozen back roads of the Hawkeye State. The yard signs have not yet sprung up in the snow — but to the extent that they are there, they are usually Bernie’s signs.

There is an occasional billboard for Tulsi Gabbard, towering over the stubble of corn fields, or a sign for Sen. Elizabeth Warren (D-MA). Former South Bend, Indiana, Mayor Pete Buttigieg drew a large midday audience in the small town of Newton, and billionaire Tom Steyer’s ads are ubiquitous on TV.

A Des Moines Register poll last week showed that Sanders held a three-point led — barely inside the margin of error — when  likely Democratic caucus-goers were asked to name their first choice for president.

Several Democrats told me that many in the state are undecided, but that Bernie has the advantage of a devoted base of support that has never wavered — not after 2016, not after the heart attack last fall, and certainly not after Warren and CNN tried to tag-team him on the question of whether a woman could win.

The evident bias of the CNN moderators at the Democrat debate in Des Moines has only energized Bernie fans: anger at fake news is not just for Trump supporters.

One small business owner I spoke to the day after the Democrat debate this week told me that he felt discouraged at the weakness of the Democratic field — that no one could beat Trump in November — but that Bernie, at least, felt authentic.

Warren is a former Republican who pretended to be a Native American for decades. Former Vice President Joe Biden is an establishment creature with a lifetime of controversial statements and positions to disavow. After 50 years in Washington, no one knows what he believes. He is viewed as a safe bet, but not a winning one.

Buttigieg is a Midwesterner, but with coastal airs, who put his supporters behind a rope line at that town hall, something Bernie would likely never do.

There is some nostalgia at work — or, as one Bernie hats put it, “Hindsight 2020.” For many Democrats, Bernie is the “road not taken” — the left-wing movement candidate who, unlike Hillary Clinton, recognized the importance of issues like trade to working-class voters in the Midwest — the voters who put Donald Trump in the White House.

But the support for Bernie goes beyond sentiment. Supporters are inspired by his bravery, his willingness to keep fighting for a coherent ideology that has barely shifted since his Soviet Union honeymoon.

Despite the impracticality of his big government plans — plans that Warren has largely copied, and which are frightening entrepreneurs across the country, the New York Times reported Friday — Sanders at least has the courage of his convictions.

And voters are responding. Sanders has surged to a five-point lead in the most recent Emerson College poll in New Hampshire, and has narrowed the gap to one point behind Biden in Nevada.

Biden still trusts his firewall in South Carolina, among black voters — but for how long? If Sanders goes 1-2-3 in the earlier contests, anything is possible, especially with help from African-American luminaries like Cornel West, who is stumping for Sanders in Iowa.

The Democratic field’s weakness is Sanders’s strength. The argument for “electability” has faded as the whole group has begun looking more unelectable; the argument for identity politics has disappeared as the only remaining frontrunners onstage are white.

A vote for Bernie is partly an expression of despair — but it is also a chance to send the party establishment a message. And it offers the consolation of having voted for someone that is driven by passion, who defies age and the odds.

Joel B. Pollak is Senior Editor-at-Large at Breitbart News. He earned an A.B. in Social Studies and Environmental Science and Public Policy from Harvard College, and a J.D. from Harvard Law School. He is a winner of the 2018 Robert Novak Journalism Alumni Fellowship. He is also the co-author of How Trump Won: The Inside Story of a Revolution, which is available from Regnery. Follow him on Twitter at @joelpollak.

“Oh, my God, it is so good!” “An angel.” Tara Simon, I had to watch your comments three times, because they are so good, expert and appreciative. This performance (in Moscow) in mid-April 2019 was Igor Krutoi’s and Dimash’s birthday present to the celebrated Russian singerina, Alla Pugachova, who turned 70. She used to be a shining star in Russia (back then, Soviet Union) in the 1980’s and early 1990’s. (She was well know also in many other countries, including mine). I couldn’t possibly figure out a better birthday present for anybody. It is composed by Igor Krutoi (who announced Dimash and accompanied him by piano) 25 years ago for Ms. Pugachova (before Dimash was even born). He modified it for Dimash to sing. — You made a short note on what Dimash is wearing. Dimash was recently proclaimed the best-dressing man in Kazakhstan. He wears a different outfit at every performance (unless he is wearing the Kazakh national dress). During his solo concerts he changes his dress many times. His wardrobe must be huge. After his having performed “Le SOS d’un terrien en detresse” in the Hunan Television “Singer 2017” competition, he won (unexpectedly) over 1.4 million fans overnight. Among those fans were many tailors, sartorial artisans and artist, who started designing an making dresses for Dimash. They produced loads of beautiful suits and dresses for him. They did all of it on their own, out of appreciation, because of their good heart. This unexpected act just shows that humans are not just desperately evil; we can also be incredibly good and loving, which is something that Dimash is promoting through his singing and performances. Dimash says that, in his songs, “Each moment contains a hundred messages from God.”