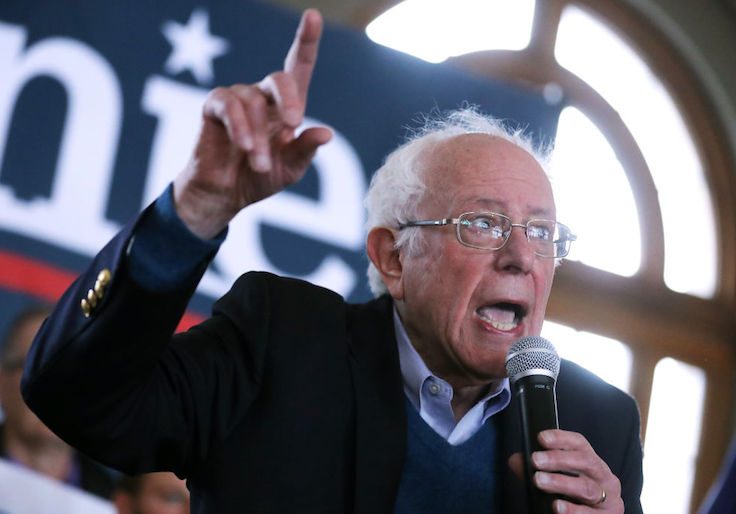 The Washington Free Beacon has obtained an email addressed to Senator Bernie Sanders (I., Vt.) from a group calling itself the Billionaires for Social Justice and a New World Government. The full text of the email is below:

From: The Good Billionaires <mike@bloomberg.com>

We the undersigned represent a diverse constituency of American billionaires who support the Democratic Party. Some of us prefer to work behind the scenes creating dark money organizations pushing global disarmament and tribunal justice for the architects of the Iraq War. Some of us have bought media operations, purchasing newspapers and Internet platforms to help amplify progressive voices above the noise of Fox News. Two of us are running for president like yourself.

But all of us have one thing in common: We are human beings. We put our pants on, one leg at a time with the help of a dedicated butler, like most Americans. Last Friday’s debate in New Hampshire was hurtful and othering for all Americans with ten-digit wealth. For those of us who have fought hard for a progressive agenda, your campaign feels like a betrayal.

To claim that progressives must oppose Americans of enormous wealth is ahistorical. Should progressives have rejected Franklin Delano Roosevelt and his LGBT wife Eleanor? And should progressives cancel the Obama family? They didn’t begin their presidencies as billionaires, but wait till you see their Netflix deals for 2020.

Normally, we would not appeal to any campaign in such a public way. We believe in a big tent when it comes to centralizing the economy and engineering the culture. Many of us (well, actually just Tom Steyer) like you. But your attacks are doing real damage. Amy Klobuchar told us to stop contacting her until after the Nevada caucuses. One of us had to cancel a private Beyoncé concert and wine tasting fundraiser for Mayor Pete Buttigieg last month. Do you have any idea how hard it is to schedule Beyoncé? You probably don’t because Sidney Blumenthal tells us the last album you purchased was The Best of Peter, Paul and Mary.

We understand some of the anger inside the Democratic Party these days. We’re angry, too. We’re not saying you shouldn’t attack any billionaires, we’re saying you should stop attacking the good billionaires. If you want to run campaign ads railing against Sheldon Adelson or Rebekah Mercer, we would happily pay for them. But we’re the guys fighting for trans-equality, ending the fossil fuel industry, and destroying the state of Israel. Aren’t these supposed to be your issues too?

So please, let’s find a way to work this out. All of us would be happy to support your campaign if you’re the nominee, but we can’t support someone who does rhetorical violence to the lived experience of billionaires. Your record is so strong when it comes to most minorities. We urge you to show the same sensitivity to Americans who have accumulated astronomical wealth.

Billionaires for Social Justice and a New World Government

3 thoughts on “An Open Letter to Bernie Sanders”