March 28, 2020 “Information Clearing House” – The Trump administration is reacting to the pandemic stress by lashing out at perceived internal and external enemies. Secretary of State Mike Pompeo is leading the external onslaught.

UN Secretary General Antonio Guterres has called for an “immediate global ceasefire” to focus on fighting Covid-19. He has appealed for the “waiving of sanctions that can undermine countries’ capacity to respond to the pandemic.”

But Washington is not listening.

Requests from Venezuela and Iran for emergency IMF loans to buy medical supplies were blocked by U.S. interventions.

Just a month ago Pompeo announced an increase of sanctions against Iran. The sanctions block money transfers. They make it impossible for Iran to import the medical equipment it urgently needs to counter the epidemic.

While the U.S. renewed the sanction waiver which allows Iraq to import electricity and gas from Iran the waiver is now limited to only 30 days. One third of Iraq’s electricity depends on those imports from Iran and, if the waiver is not renewed, its hospitals will go dark just when the epidemic will reach its zenith.

Parts of the Trump administration are even pressing for a wider war against alleged Iranian proxy forces in Iraq:

The Pentagon has ordered military commanders to plan for an escalation of American combat in Iraq, issuing a directive last week to prepare a campaign to destroy an Iranian-backed militia group that has threatened more attacks against American troops.

But the United States’ top commander in Iraq has warned that such a campaign could be bloody and counterproductive and risks war with Iran.
…
Some top officials, including Secretary of State Mike Pompeo and Robert C. O’Brien, the national security adviser, have been pushing for aggressive new action against Iran and its proxy forces — and see an opportunity to try to destroy Iranian-backed militia groups in Iraq as leaders in Iran are distracted by the pandemic crisis in their country.

Military leaders, including Defense Secretary Mark T. Esper and Gen. Mark A. Milley, the chairman of the Joint Chiefs of Staff, have been wary of a sharp military escalation, warning it could further destabilize the Middle East at a time when President Trump has said he hopes to reduce the number of American troops in the region.

The plan is lunatic. One can not “destroy” Kataib Hezbollah and other Iraqi Shia groups which Iran helped to build during the war against ISIS. These groups are part of political parties with deep roots in the Iraqi society.

France, Italy and the Czech Republic have started to withdraw from Iraq. Denmark is also leaving and the UK is removing 50% of its force. There are less then 5,000 U.S. soldiers in Iraq and a war on Kataib Hezbollah could mobilized hundreds of thousands Iraqis to fight against the U.S. occupation. Such a war would also involve Iran and the U.S. would certainly lose it.

The U.S. has currently two aircraft carrier groups in the Arab sea to threaten Iran. But those ships are of no use right now. They are ‘cruise ships with guns’. Nuclear powered five billion dollar petri dishes for novel coronavirus outbreaks. Two U.S. carrier groups in the Pacific are already out of action because they have larger outbreaks on board. It is only a question of time until the other carriers follow.

It is not only Iraq and Iran the U.S. is aiming at. The U.S. State Department cut its contributions to health care in Yemen just in time of the highest need:

Officials with the United States Agency for International Development said the decision to halt funding, reported earlier by The Washington Post, included exceptions for “critical, lifesaving activities, including treatment of malnutrition as well as water, sanitation and hygiene programs aimed at keeping people healthy and staving off disease.”

But humanitarian officials said the agency’s exceptions did not provide for continued funding of basic health care programs, which are heavily reliant on foreign aid, and did not seem to take into account what might occur when the coronavirus begins to spread.

Not happy with only messing up the Middle East the State Department also renewed its assault on Venezuela. On Thursday the Justice Department announced charges of ‘Narco-Terrorism, Corruption, Drug Trafficking and Other Crimes’ against President Nicolas Maduro and 14 former or current officials. It put up a $15 million reward for Maduro’s arrest.

It alleges that Maduro worked with Columbian cartels to smuggle cocaine through Venezuela.

But here is a map of smuggling routes from U.S. ally Columbia where most of the cocaine is produced. It was shown during a Congress hearing. Whatever is smuggled through Venezuela is a tiny share compared to the huge stream that comes through the Pacific. 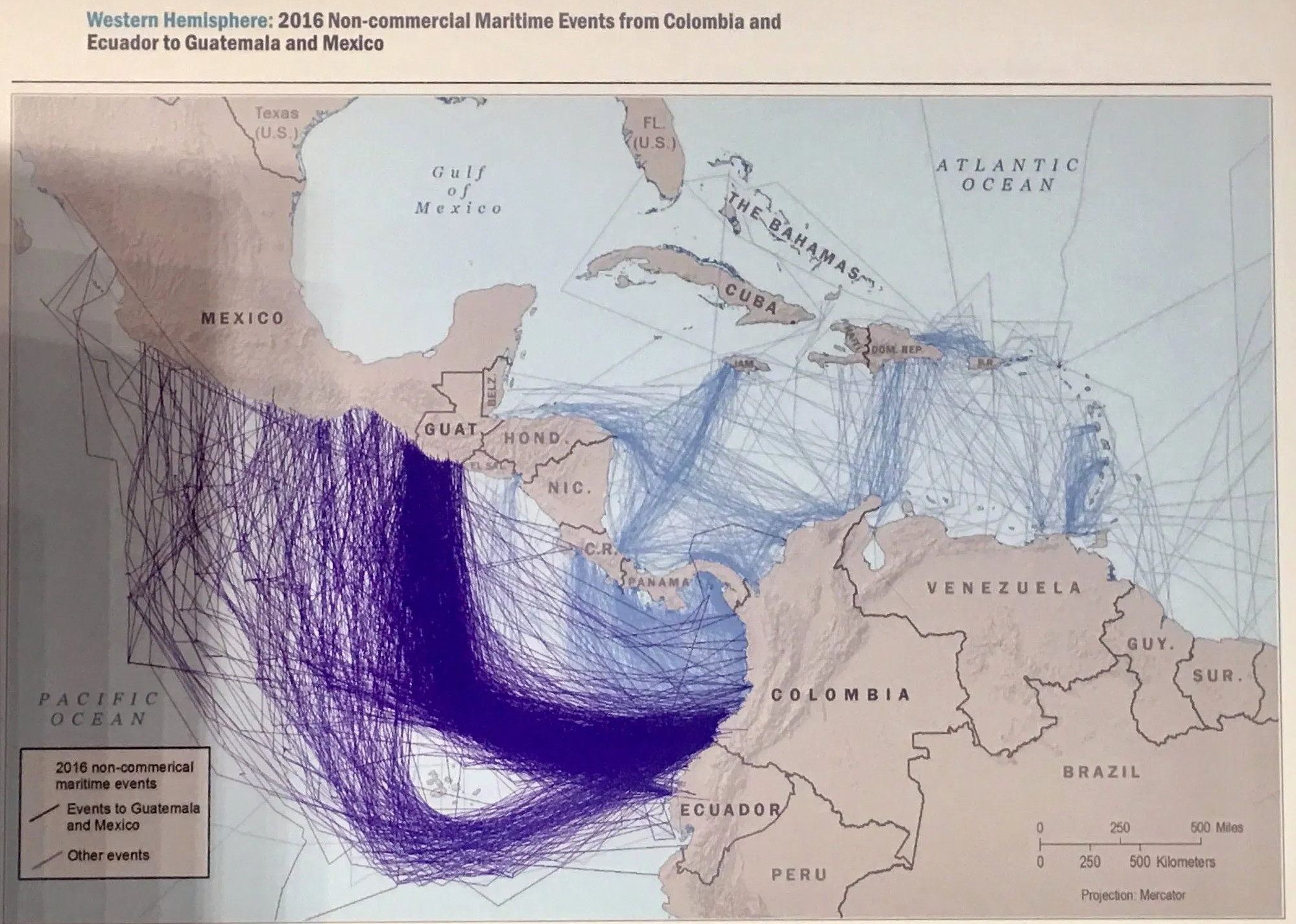 COVID-19 has taken an entire U.S. aircraft carrier out of commission

Won’t you spare me over til another year
Well what is this that I can’t see
With ice cold hands takin’ hold of me
Well I am death, none can excel
I’ll open the door to heaven or hell
Whoa, death someone would pray
Could you wait to call me another day
The children prayed, the preacher preached
Time and mercy is out of your reach
I’ll fix your feet til you cant walk
I’ll lock your jaw til you cant talk
I’ll close your eyes so you can’t see
This very air, come and go with me
I’m death I come to take the soul
Leave the body and leave it cold
To draw up the flesh off of the frame
Dirt and worm both have a claim

Won’t you spare me over til another year
My mother came to my bed
Placed a cold towel upon my head
My head is warm my feet are cold
Death is a-movin upon my soul
Oh, death how you’re treatin’ me
You’ve close my eyes so I can’t see
Well you’re hurtin’ my body
You make me cold
You run my life right outta my soul
Oh death please consider my age
Please don’t take me at this stage
My wealth is all at your command
If you will move your icy hand
Oh the young, the rich or poor
Hunger like me you know
No wealth, no ruin, no silver no gold
Nothing satisfies me but your soul

In voudun there are gods and demigods of death and of the cemetery who come to the dancing
ground and possess some of their worshipers; now vehicles through which the deities can communicate
with mortals, the possessed advise, gossip, eat, dance, and socialize with the congregants.
Thus Bessie Jones’s dramatic dialogue between Death and the reluctant sinner might just as well
have its roots in an African tradition as in the popular religious poems and dramas of medieval
Europe in which death was so frequently personified.
Chorus
O Death in the mornin’, (3 times)
Spare me over another year.
Well, Death walked up into the sinner’s gaze,
Says, “B’lieve you have waited now a little too late,
Your fever now is one hundred and two,
Have a narrow chance if you ever pull through.”
(Chorus)
He cried, “O Death,”
Cryin’, “O Death in the mornin’,
O Death,
Death, spare me over in another year.
Hey, what is this I see,
Cold, icy hands all over me?
You say, “I am Death, no one can excel,
I span the doors of Death and Hell.”
(Chorus)
11
“No, you heard God’s people sing and pray,
You would not heed, you just walked away,
You would not even bend your knee,
Now you got to come and go with me.
(Chorus)
“Well, I’m gon’ fix your feet so you cannot walk,
‘M fix your tongue where you cannot talk,
Close your eyes and you cannot see,
And you got to come and go with me.”
(Chorus)
“Well, Death, consider my age,
And do not take me in this stage,
Because all of my wealth is at your command,
If you’ll just move your cold, icy hand.”
(Chorus)
He cried, “No no,
O Death in the mornin’,
No no,
Lord, spare me over in another year.”

Check out Daniel’s interesting interview with a doctor on the ground in Wuhan:

Man’s greatest longing is for freedom. Man IS a longing for freedom. Freedom is the very essential core of human consciousness: love is its circumference and freedom is its center. These two fulfilled, life has no regret. And they both are fulfilled together, never separately.

People have tried to fulfill love without freedom. Then love brings more and more misery, more and more bondage. Then love is not what one has expected it to be, it turns out just the opposite. It shatters all hopes, it destroys all expectations and life becomes a wasteland — a groping in darkness and never finding the door.

Love without freedom naturally tends to be possessive. And the moment possessiveness enters in, you start creating bondage for others and bondage for yourself — because you cannot possess somebody without being possessed by him. You cannot make somebody a slave without becoming a slave yourself. Whatsoever you do to others is done to you.

This is the basic principle to be understood, that love without freedom never brings fulfillment.