April 01, 2020 “Information Clearing House” –  The latest Financial Times graphic for covid-19 cases per country shows that the U.S. case numbers are now literally off the scale. 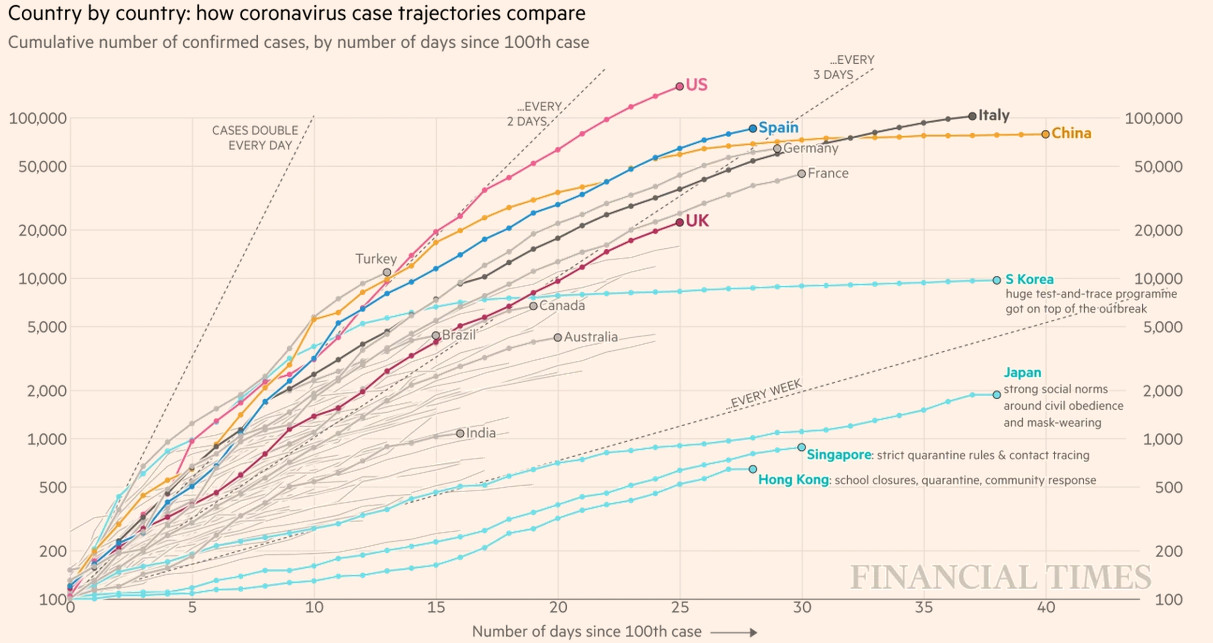 When John Burn-Murdoch created that daily updated chart he did not anticipate that any country would have more than a 100,000 total cases. That was a reasonable assumption as China, with 1.4 billion inhabitants, stopped the epidemic with less than 85.000 total cases even when it was surprised by the outbreak.

As of now the U.S. has 164.435 known cases. It will reach a total number of several dozens of millions and will have several hundreds of thousands of dead caused by the covid-19 disease.

Most but not all of those who will die from it will have one or more co-morbid diseases. The number of death in the U.S. will likely be higher than elsewhere because obesity, diabetes and heart problems are more prevalent in the U.S. than in most other countries.

Another reason why the U.S. will have a larger than necessary outbreak is wide mistrust in the authority of the state. A significant number of people will reject stay at home orders or other measures the authorities will have to take.

Then there is this:

I’m talking about the US, not #Iran.

The U.S. also has many people without health insurance. The many newly laid off people will additionally lose theirs. These people will avoid seeing a doctor or to go to a hospital as the enormous costs would ruin them. The for-profit health system will reject sick persons who are unlikely to be able to pay their bills. The cases of people who die from such circumstance should be put into the death by lack of money category instead of being blamed on something else.

Congress has failed to take the necessary measures and to give everyone access to free tests and free care. This will come back to bite everyone as it makes sure that the disease will circulate longer and stronger than in other rich countries. Even the rich, who will gain most of the money Congress passed out, will be affected by this. 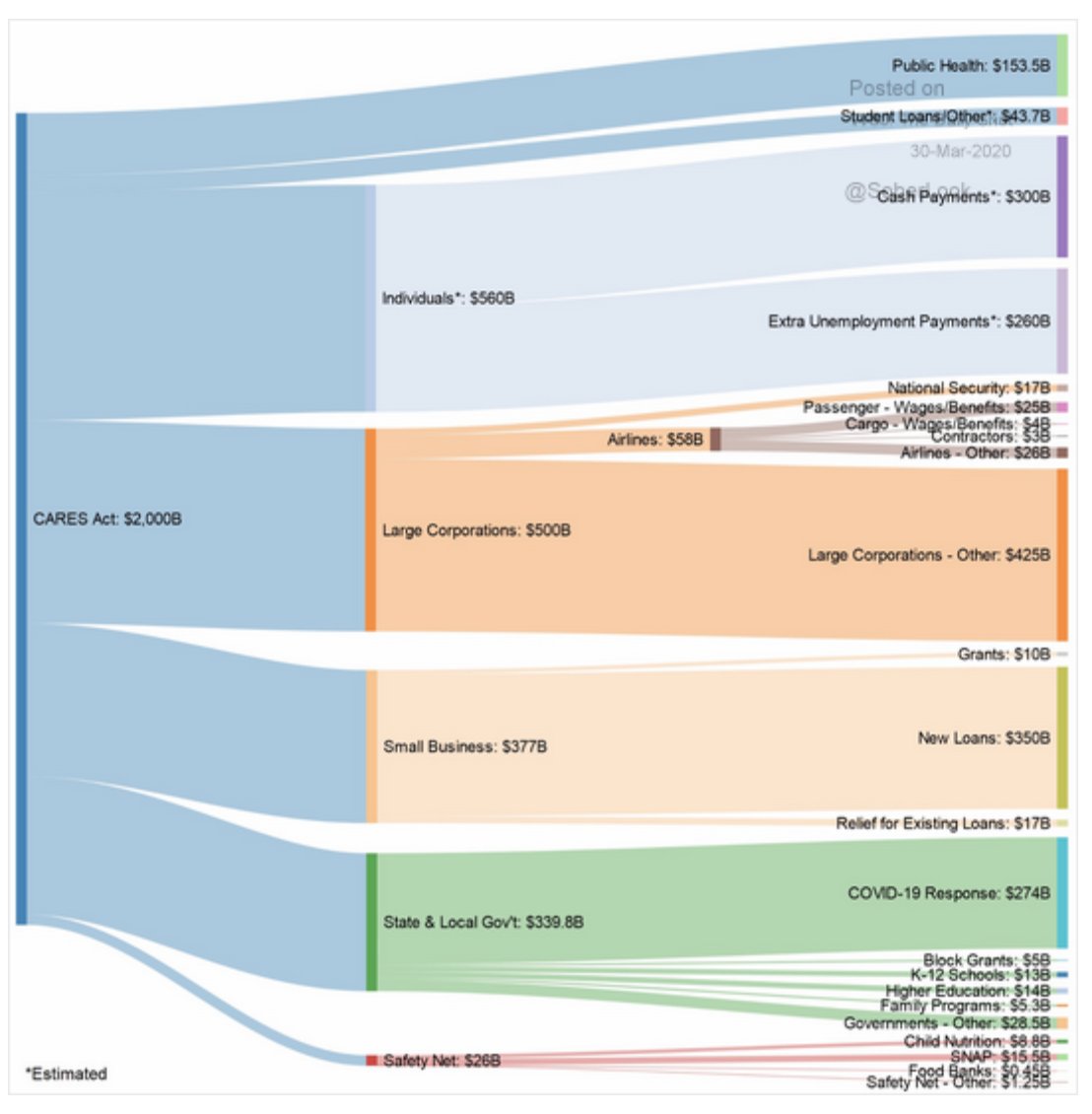 The reasons that the U.S. will have very high numbers are obvious and they have nothing to do with China.

When the SARS virus broke out the world united in defeating it. It did that by isolating all cases and by aggressively tracing anyone who had come into contact with them. The fight was successful. The SARS virus no longer exists outside of high security laboratories.

But when the SARS-CoV-2 evolved there was no united response. China did its very best to defeat the virus. It won the fight against the virus within its country but other states did not join in the effort to eradicate it. SARS-CoV-2 is more infective than SARS and we will never know if an eradication attempt could have been successful. There is no glory in prevention. But it is sad that we did not even try.

The Center of Disease Control botched its creation of a test for the SARS-CoV-2 virus that causes the disease. The German designed test model the World Health Organization recommended was rejected by the CDC. It wanted to do its own test and failed. U.S. testing started too late and it then tested too few to get a grip on the size of the emerging epidemic.

U.S. President Donald Trump did not believe that the virus would be a problem. U.S. media likewise played down the danger. Most of its reporting from China had a racist undertone. The nativist freakout only helps to hide the real origin of the crisis. Other conservative leaders in other countries, Jair Bolsonaro in Brazil, Boris Johnson in the UK, Alexander Lukashenko in Belarus and others, similarly ignored the predictable consequences of outbreaks in their countries.

It is now guaranteed that the virus will stay with humanity until someone finds a vaccine that is effective, safe to use and cheap. The task now is to reduce the speed of new infections so we do not overwhelm our healthcare systems.

A lot has been learned about the virus and how it behaves. SARS-CoV-2 is three to four times more infectious than the flu. The virus is transmitted by droplets which are then inhaled by other people. It then attacks cells in the upper throat and starts to replicate there. Two days later the infected person is infectious. Each time s/he speaks, coughs or sneezes s/he will release fine droplets which carry a high load of viruses. Symptoms, which only 75% of all infected persons will feel, usually start on day 5 or 6 after the infection. The main symptoms are a dry cough and general weakness. In some patents the symptoms may look like a heart attack. A person stays infectious until day 8 to 10.

The virus can be detected after it started to replicate. A swab test is taken (it feels like it looks) and processed. If the result is positive the person must be quarantined to protect others. 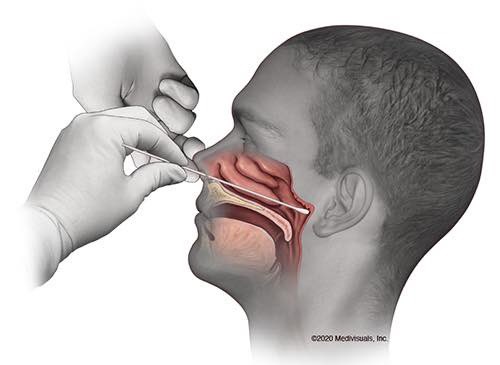