This “woke” gesture by Ms Pelosi, Schumer, Sen. Harris had me ROFL 😀 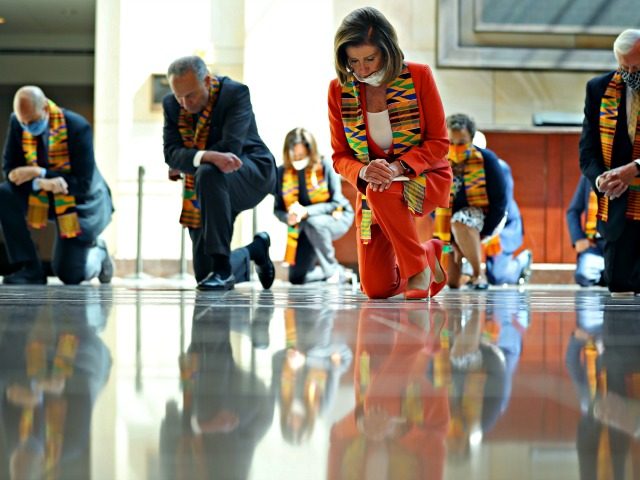 As Congressmembers ice their knees and put away their kente cloth graduation stolls, I hope they consider supporting a monthly stimulus check. https://t.co/u1WAhukMdY pic.twitter.com/s4WwgCQ3wk

“I still can’t wrap my mind around the fact that they draped these white people in kente cloth to ‘honor’ him,” Joseph said in another tweet. “This has to be hell.”

Democrats in the House and Senate decided to wear African patterned cloth and take a knee for 8 minutes and 46 seconds in honor of George Floyd.

This is a mess. pic.twitter.com/CerdH2Zuqq

Also, if the CBC and/or Clyburn suggested this, it’s a testament to how problematic some Black people are in politics.

Backlash continued to roll in, and it was both swift and severe:

Is that kente cloth they’re wearing ? 🤯… is this supposed to drive in the message “ we care for the blacks” What in the hell?…trying not to laugh but this is sending me. pic.twitter.com/uc7vHVMHAD

How wild to think this is what anyone wants. Hang up the kente cloth write laws and defund the police. https://t.co/tc0t3TZxMH

Be honest, if I showed up in DC wearing a Kente cloth, you'd rightfully boo me out of the city.pic.twitter.com/v4veAKXKGX

And really fuck the Kente cloth, when does this legislation get voted on?

The Lynching Bill still has not passed btw

It’s performative activism because they never took a knee three years ago when it was controversial and had actual consequences. They do it now because they think it’s trendy—hence the Kente cloth.

they literally dressed up as a meme.

As described by ThoughtCo:

Although kente cloth is now identified with the Akan people in West Africa, and particularly the Asante Kingdom, the term originates from the neighboring Fante. Kente cloth is closely related to Adinkra cloth, which has symbols stenciled into cloth and is associated with mourning.​

As one of the prominent symbols of African arts and culture, Kente cloth has been embraced by the broader African diaspora (which means people of African descent wherever they might live.) Kente cloth is particularly popular in the United States among African-Americans and can be found on all types of clothing, accessories, and objects. These designs replicate registered Kente designs, but are often mass-produced outside of Ghana with no recognition or payment going to the Akan craftsmen and designers, which Boatema Boateng has argued represents a significant loss of income to Ghana.

The Ultimate History Project also emphasized Kente cloth’s history with the Ashanti people, which is “strongly tied to the history of the slave trade”:

Pelosi spoke ahead of the collective moment of silence on Monday as Democrats gathered in Emancipation Hall at the U.S. Capitol.

“That tragedy, that hour of history … slavery in our own country and then all the consequences of that — we are here to observe that pain,” Pelosi said as the Kente cloth draped around her neck.

“We are here to respect the actions of the American people to speak out against that, specifically manifested in police brutality,” she added ahead of their moment of silence, struggling to stand back up as it concluded:

Democrats on Monday unveiled their latest police reform bill, the Justice in Policing Act, which bans chokeholds, no-knock warrants, and includes a racial bias training program, among other reforms.

‘Okay everyone. On your marks. Scarf up for the pandering and posturing photo op. Masks on, now gracefully! fall to one knee …. and action!’

don’t they realize they are the laughing stocks of America.
do they not realize what fools they make of themselves