(Natural News) The widely-hyped Moderna coronavirus vaccine caused adverse events (side effects) in over 50% of clinical trial participants, including, “fatigue, chills, headache, myalgia, and pain at the injection site.” While it generates antibodies in the short term, new studies indicate those antibodies fade very quickly, rendering the vaccine pointless in the face of the coronavirus pandemic.

The side effects of the Moderna mRNA vaccine are documented in a study published in the New England Journal of Medicine, a discredited, pro-pharma junk science rag that lies in favor of Big Pharma in every way possible. As published on Medicine.news, the NEJM was recently caught up with The Lancet in a junk science scheme that sought to discredit hydroxychloroquine through the use of fabricated data that was published in both journals (then was later retracted).

The new study is entitled, “An mRNA Vaccine against SARS-CoV-2 — Preliminary Report.” It details the astonishing degree of side effects experienced by study subjects, revealing that over half of study participants reported at least one side effect. This chart, from the study, also shows that the side effects are dose dependent, meaning the higher the injection dose, the higher the reported side effects, further strengthening the causal ties between the vaccine and the side effects: 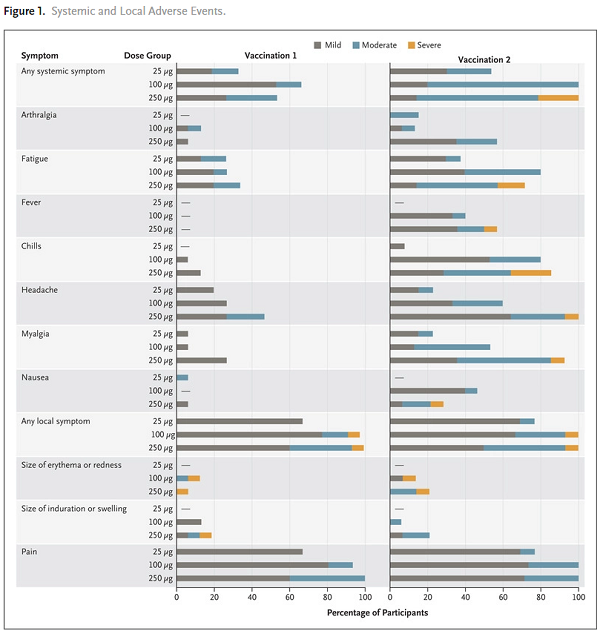 As you can see from the chart, 100% of study participants experienced side effects at the 100 ug or 250 ug injection volumes, during the second round of vaccination.

This study reveals that the vaccine becomes increasingly toxic with subsequent injections, meaning even if the fist injection is relatively well handled by the body, the second injection can be significantly more dangerous.

Notably, with other studies now revealing that coronavirus antibodies fade quickly over the period of about 3 months, the mRNA vaccine from Moderna would have to be injected multiple times, perhaps as many as four times each year in order to maintain high levels of antibodies.

But with each injection, the vaccine becomes more toxic and produces more side effects. As the study authors conclude, “Systemic adverse events were more common after the second vaccination, particularly with the highest dose…”

Even with side effects impacting all participants in the second round, study authors claim everything’s fine

Yet, to no one’s surprise, all these toxic effects of the vaccine that increase with subsequent vaccines are not called out as an item of concern. Given that the study authors are, of course, paid by Moderna to produce pro-vaccine propaganda in the name of “science,” they conclude that all the side effects are perfectly fine, stating: (emphasis added)

Across both vaccinations, solicited systemic and local adverse events that occurred in more than half the participants included fatigue, chills, headache, myalgia, and pain at the injection site. Evaluation of safety clinical laboratory values of grade 2 or higher and unsolicited adverse events revealed no patterns of concern… These safety and immunogenicity findings support advancement of the mRNA-1273 vaccine to later-stage clinical trials.

Got that? The vaccine is increasingly toxic in higher doses and multiple injections, but it’s still awesome and should move toward production and widespread injections into potentially billions of human beings, despite no long-term safety studies being conducted whatsoever.

That’s the vaccine industry in 2020: Screw safety and science, just approve the damn thing and collect the hundreds of billions of dollars from governments buying your vaccine, even if it harms or kills millions of people.

Even when the vaccine invokes an antibody response, that’s not “immunity”

Note that the production of antibodies in the blood is not the same as “functional immunity.” There is zero evidence that this vaccine makes anyone immune to coronavirus infections.

As Snyder points out, this is a huge finding because it means that coronavirus vaccines will likely only work short-term. After perhaps 90 days or so, the vaccine “wears off” and the antibodies are no longer functional in the body. Even the presence of antibodies doesn’t automatically confer immunity, by the way. Again, from Snyder:

In addition, experts are telling us that even if a COVID-19 victim develops antibodies, that does not necessarily mean that individual has immunity.  In an article that he authored for CNN, Dr. William Haseltine explained that “only 15% of those who test positive for antibodies make the neutralizing antibodies necessary to develop immunity”…

In other words, even if the mRNA vaccine from Moderna produces antibodies, the whole exercise may be pointless for two reasons:

Thus, the Moderna vaccine — which the Big Pharma pimping mainstream media has been hyping up as the savior of humanity — is probably a massive medical hoax that will scam world governments out of hundreds of billions of dollars for a treatment that flat-out doesn’t work.

Worse than a hoax, this vaccine will clearly harm large numbers of people, given that 100% of study subjects are already experiencing adverse events in the high dose group, during the second round of injections. How toxic is this going to get during a third vaccine? Or a fourth? And is there any end to how many injections of the same vaccine will be mandated by a corrupt, criminal FDA, CDC and national media that makes all its editorial decisions based on the profit demands of the drug cartels?

Finally, keep in mind that globalists who also promote the depopulation agenda are demanding this vaccine be given to Black people first. So wait: Take a toxic vaccine that doesn’t work but that causes huge side effects, and line up all the Blacks to be human guinea pigs?

Sounds like globalists and the vaccine industry have a whole new plan for planet Earth beyond 2020, and it has nothing to do with halting the pandemic but everything to do with genocide.

Don’t you find it astonishing that while hundreds of U.S. corporations are lining up to claim “Black Lives Matter,” many of those very same corporations are the ones producing the vaccines that will no doubt destroy Black lives?